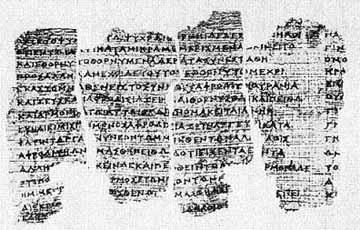 The Derveni papyrus is an ancient Greek papyrus scroll which was found in 1962. It is a philosophical treatise that is an allegorical commentary on an Orphic poem, a theogony concerning the birth of the gods, produced in the circle of the philosopher Anaxagoras, in the second half of the fifth century B.C., making it "the most important new piece of evidence about Greek philosophy and religion to come to light since the Renaissance" (Janko 2005). It dates to around 340 B.C., during the reign of Philip II of Macedon, making it Europe's oldest surviving manuscript.

The scroll was found at a site in Derveni, Macedonia northern Greece, in a nobleman's grave in a necropolis that was part of a rich cemetery belonging to the ancient city of Lete. It is the oldest surviving book in the Western tradition and one of very few surviving papyri found in Greece. The scroll is carbonized from the pyre of the nobleman's grave.The papyrus is kept in the Thessaloniki Archaeological Museum.

The text is a commentary on a hexameter poem ascribed to Orpheus. Fragments of the poem are quoted. The poem begins with the words "Close the doors, you uninitiated", a famous admonition to secrecy, recounted by Plato. The theogony described in the poem has Nyx (Night) give birth to Heaven (Uranus), who becomes the first king. Cronus follows and takes the kingship from Uranus, but he is likewise succeeded by Zeus.

Zeus, having "heard oracles from his father", goes to the sanctuary of Night, who tells him "all the oracles which afterwards he was to put into effect." Upon hearing them, Zeus "swallowed the phallus [of the king Uranus] who first had ejaculated the brilliance of heaven." Derveni Papyrus