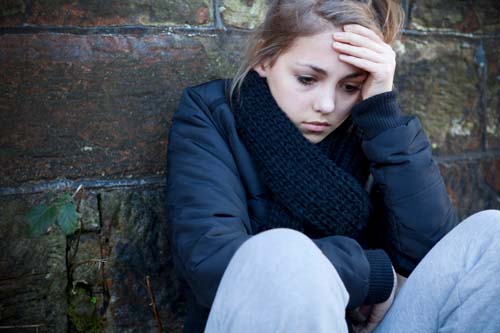 The nature of our reality is to experience emotions - highlighted by the chemical changes in the brain at different stages of development during one's journey here. The brain is nothing more than a computer responding to its programming for behavior based on one's DNA codes for experience.

As a former High School special education teacher and psychologist, I have worked with the teenage population. It all begins when the teen, who is often considered emotionally stable and good student, suddenly becomes lazy and unmotivated, often cutting classes. Undiagnosed and untreated the behavior continues on without an understanding of what is happening - peaking around age 19 when full blown bipolar disorder or psychosis (breakdown) occurs. Generally, one need only look at the emotional patterns of the biological parents, to see the genetic thread and the environment that would cause the behavior. We known teens have issues, and hopefully they are understood and dealt with properly, but that is not always the case.

Along with adolescent depression, one often finds learning challenges (ADD - ADHD) that should have been diagnosed and treated in elementary school, or one will surely lose the attention of a student who feels totally disconnected from school curriculum, yet generally enjoys hours at a commuter playing games.

Metaphysically speaking -- teens often express an interest in ouija boards, poltergeists, aliens, and "the other side" as a means of escapism and empowerment. In this case, the teen is trying to find a connection beyond the restraints of our physical reality. When you feel the world has failed you, you seek answers elsewhere.

With professional help and understanding, these behavior patterns become nothing more than a stage that will be outgrown, but in most cases this is a lifetime pattern.

child abuse - both physical and sexual

death of someone they love

loss or betrayal by a trusted friendship

bullying or harassment at school or somewhere else

stressful life events, such as the loss of a parent to death or divorce


Behavior patterns may include:

sadness, discouragement, and a loss of self-worth and interest in their usual activities

failure to do school work as depression leaves the brain unfocused

trouble sleeping, too much sleeping, or daytime sleepiness

pulling away from family and friends, spending more time alone

feelings of not belonging here, not connected, from another place


Almost half of depression in adults starts in adolescence   PhysOrg - February 29, 2012
A new study by research psychologists at Bangor and Oxford Universities show that half of adults who experience clinical depression had their first episode start in adolescence. In fact, the most common age to see the start of depression is between 13-15 years-old.

Depression used to be a problem that first surfaced in middle-aged people says Professor Mark Williams of Oxford University who led the study with Professor Ian Russell and Rebecca Crane of Bangor University. In recent decades, however, researchers began to find that patients were first becoming depressed at an increasingly young age, a trend that has contributed to depression becoming one of the most pressing health issues across the world.

As part of the study, they assessed the age at which people first became depressed and its links to later mental health problems and suicidal feelings. The study involved 275 people who had suffered repeated bouts of depression. All were carefully assessed to determine at what age they had first experienced the combination of symptoms that would indicate clinical depression. In the article published this month in the Journal of Affective Disorders the researchers showed that 48 percent of these patients had first suffered the illness before the age of 18 years. In fact, the most common age of their first episode of depression was 13-15 years.

These results are important because depression is a problem that tends to return. If you've been depressed once, then you have a roughly 50:50 chance of becoming depressed again. If you have become depressed twice or more, then this risk rises to 70-80 percent.

Rebecca Crane of the Centre for Mindfulness Research and Practice at Bangor University adds: 'The Mindfulness-Based Cognitive Therapy course offers people who are vulnerable to recurrent depression the opportunity to engage in a raining process which builds skills in recognising and responding wisely to the first signs of depression.'

'Over repeated episodes of depression unhelpful habitual patterns of thinking and feeling are established. Mindfulness-Based Cognitive Therapy teaches participants to recognize and respond to these patterns in new ways. Here at Bangor University we offer mindfulness classes to the general public. These courses are open to everyone and so are not specifically aimed at people with recurrent depression - they do however develop the skills which research has demonstrated is relevant to people who are vulnerable to depression.'