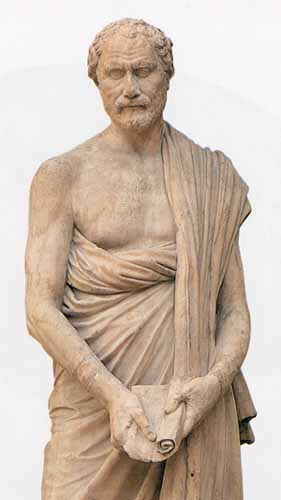 Demosthenes (384 BC 322 BC) is generally considered the greatest of the Attic orators, and thus the greatest of all Ancient Greek orators. His writings provide an insight into the life and culture of Athens at this period of time.

Born the son of a wealthy sword-maker, Demosthenes was orphaned at the age of seven. His father left him well-provided-for, but his legal guardians defrauded him and squandered his inheritance, causing him to seek retribution through the courts when he came of age.

As a boy Demosthenes suffered from a speech impediment and he worked at a series of self-designed exercises to overcome it. A common story tells of his talking around mouthfuls of rocks to improve his diction, but it is unknown whether this is fact or merely a legendary example of his perseverance and determination.

Either way, Demosthenes became a prominent logographer and political orator (speech-maker), making his living through his ability to write and make speeches.

He is best-known for his Philippic Orations, urging the populace to rise up and defend their country against Philip II of Macedon, who was steadily gaining power and territory for the Macedonian state.Demosthenes's speaking style was relatively straightforward and generally without rhetorical flair.

It was considered somewhat vulgar by the standards of the day, but was nevertheless very popular. He also made use of his body to accentuate his words, and as a result was able to project his ideas and arguments much more forcefully (later famous orators like Henry Clay would mimic this technique).

Although Demosthenes's arguments were the products of careful study and preparation he often declined to comment on subjects he had not studied beforehand.

He was famous for his sharp wit, and his name has been used to imply a particularly venomous rejoinder.In 346 BC Demosthenes was one of many envoys sent to Philip II of Macedon to create a peace treaty. Upon their return, Demosthenes led the potentially fatal prosecution of his fellow envoys based on the ill reception of the treaty's terms and Philip II's actions immediately prior to its agreement.

The prosecution was discredited when politician and envoy Aiskhines disenfranchised Demosthenes' fellow, possibly lead, prosecutor, Timarkhos, by convincing the jury he had prostituted himself to another male while young. Demosthenes was also accused of sexual and gender impropriety. Aiskhines attributed Demosthenes' nickname, Batalos ("arse"), to his "unmanliness and kinaidi" and frequently commented on his "unmanly and womanish temper", even criticising his clothing: "If anyone took those dainty little coats and soft shirts off you ... and took them round for the jurors to handle, I think they'd be quite unable to say, if they hadn't been told in advance, whether they had hold of a man's clothing or a woman's."

Demosthenes was exiled after a convoluted affair involving money taken by one of the lieutenants of Alexander the Great. He was recalled to the Greek states after Alexander died, where he attempted once again to rally the Athenian people against Macedonia, but he was unsuccessful and took poison rather than face capture and punishment.

The historian Plutarch drew attention in his Life of Demosthenes to the strong similarities between the personalities and careers of Demosthenes and Marcus Tullius Cicero:

The divine power seems originally to have designed Demosthenes and Cicero upon the same plan, giving them many similarities in their natural characters, as their passion for distinction and their love of liberty in civil life, and their want of courage in dangers and war, and at the same time also to have added many accidental resemblances. I think there can hardly be found two other orators, who, from small and obscure beginnings, became so great and mighty; who both contested with kings and tyrants; both lost their daughters, were driven out of their country, and returned with honour; who, flying from thence again, were both seized upon by their enemies, and at last ended their lives with the liberty of their countrymen.