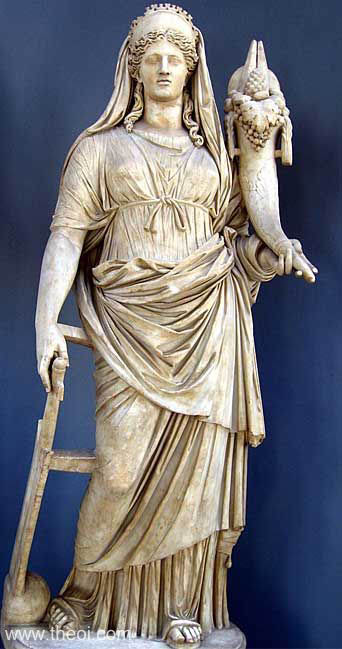 In Greek mythology Demeter ("mother-earth" or possibly "distribution-mother") is the goddess of grain and fertility, the pure nourisher of the youth and the green earth, the health-giving cycle of life and death, and preserver of marriage and the sacred law.

She is invoked as the "bringer of seasons" in the Homeric hymn, a subtle sign that she was worshiped long before the Olympians arrived. Another story states that she was one of the twelve Olympians. The Homeric Hymn to Demeter has been dated to sometime around the Seventh Century BC. She and her daughter Persephone were the central figures of the Eleusinian Mysteries that also predated the Olympian pantheon. The Roman equivalent is Ceres, from whom the word "cereal" is derived.

Demeter is easily confused with Gaia or Rhea, and with Cybele. The goddess's epithets reveal the span of her functions in Greek life. Demeter and Kore ("the maiden") are usually invoked as to theo ('"The Two Goddesses"), and they appear in that form in Linear B graffiti at Mycenaean Pylos in pre-classical times. A connection with the goddess-cults of Minoan Crete is quite possible.

According to the Athenian rhetorician Isocrates, the greatest gifts which Demeter gave were cereal (also known as corn in modern Britain) which made man different from wild animals; and the Mysteries which give man higher hopes in this life and the afterlife. 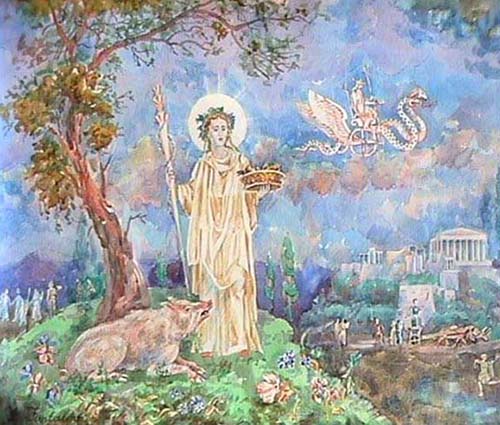 According to the Athenian rhetorician Isocrates, Demeter's greatest gifts to humankind were agriculture, particularly of cereals, and the Mysteries which give the initiate higher hopes in this life and the afterlife. These two gifts were intimately connected in Demeter's myths and mystery cults. In Homer's Odyssey she is the blond-haired goddess who separates the chaff from the grain. In Hesiod, prayers to Zeus-Chthonios (chthonic Zeus) and Demeter help the crops grow full and strong. Demeter's emblem is the poppy, a bright red flower that grows among the barley.

In Hesiod's Theogony, Demeter is the daughter of Cronus and Rhea. At the marriage of Cadmus and Harmonia, Demeter lured Iasion away from the other revelers. They had intercourse in a ploughed furrow in Crete, and she gave birth to a son, Ploutos. Her daughter by Zeus was Persephone, Queen of the Underworld. 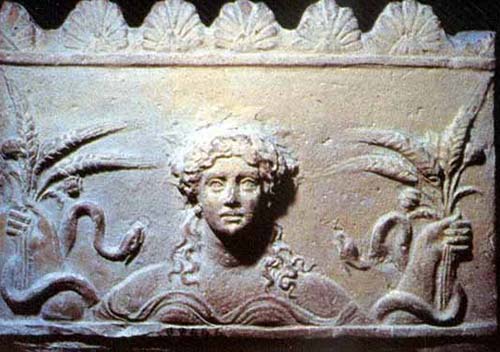 Demeter's two major festivals were sacred mysteries. Her Thesmophoria festival (October 11 - 13) was women-only. Her Eleusinian mysteries were open to initiates of any gender or social class. At the heart of both festivals were myths concerning Demeter as Mother and Persephone as her daughter. July 13, festival of Demeter. 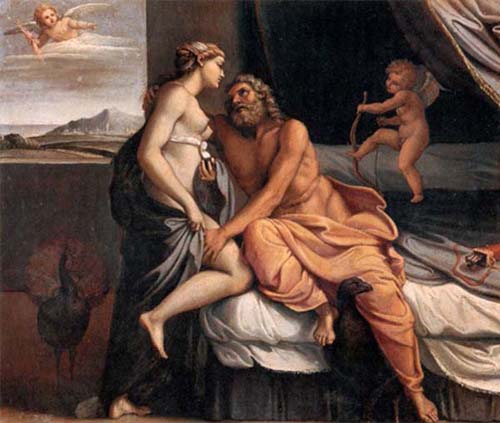 Demeter and Poseidon's names are linked in the earliest scratched notes in Linear B found at Mycenaean Pylos, where they appear as PO-SE-DA-WO-NE and DA-MA-TE in the context of sacralized lot-casting. The 'DA' element in each of their names is seemingly connected to an Proto-Indo-European root relating to distribution of land and honors (compare Latin dare "to give"). Poseidon (his name seems to signify "consort of the distributor") once pursued Demeter, in her archaic form as a mare-goddess. She resisted Poseidon, but she could not disguise her divinity among the horses of King Onkios. Poseidon became a stallion and covered her. Demeter was literally furious ("Demeter Erinys") at the assault, but washed away her anger in the River Ladon ("Demeter Lousia"). She bore to Poseidon a Daughter, whose name might not be uttered outside the Eleusinian Mysteries, and a steed named Arion, with a black mane. In Arcadia, Demeter was worshiped as a horse-headed deity into historical times. 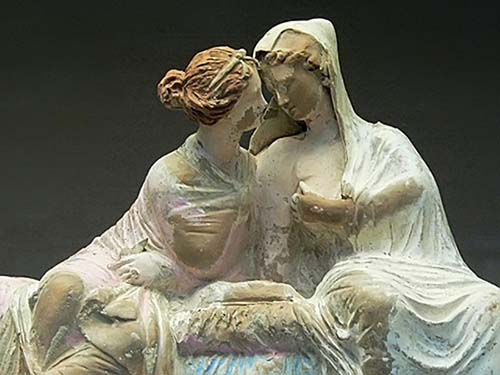 The central myth of Demeter, which is at the heart of the Eleusinian Mysteries is her relationship with Persephone, her daughter and own younger self. In the Olympian pantheon, Persephone became the consort of Hades (Roman Pluto, the underworld god of wealth). Demeter had a large scope of abilities, besides being the goddess of the harvest she also controlled the seasons and because of that was capable of destroying all life on earth.

In fact her powers were able to influence Zeus into making Hades bring her daughter Persephone up from the underworld. Persephone became the goddess of the underworld when Hades abducted her from the earth and brought her into the underworld. She had been playing with some nymphs, whom Demeter later changed into the Sirens as punishment for having interfered, and the ground split and she was taken in by Hades. Life came to a standstill as the depressed Demeter searched for her lost daughter.

Finally, Zeus could not put up with the dying earth and forced Hades to return Persephone by sending Hermes to retrieve her. But before she was released, Hades tricked her into eating six pomegranate seeds, which forced her to return for six months each year. When Demeter and her daughter were together, the earth flourished with vegetation. But for six months each year, when Persephone returned to the underworld, the earth once again became a barren realm. Summer, autumn, and spring by comparison have heavy rainfall and mild temperatures in which plant life flourishes. It was during her trip to retrieve Persephone from the underworld that she revealed the Eleusinian Mysteries.

In an alternate version, Hecate rescued Persephone. In other alternative versions, Persephone was not tricked into eating the pomegranate seeds but chose to eat them herself, or ate them accidentally, that is, not knowing the effect it would have or perhaps even recognize it for what it was. In the latter version it is claimed that Ascalaphus, one of Hades' gardeners, claimed to have witnessed her do so, at the moment that she was preparing to return with Hermes. Regardless, the result is the occurrence of the unfruitful seasons of the ancient Greek calendars.

Persephone is not only the younger self of Demeter, she is in turn also one of three guises of Demeter as the Triple Goddess. The other two guises are Kore (the younger one, signifying green young corn, the maiden) and Hekate (the elder of the three, the harvested corn, the crone) with Demeter in between, signifying the ripe oars, the nymph, waiting to be plucked, which to a certain extent reduces the name and role of Demeter to that of groupname. Before Persephone was abducted by Hades, an event witnessed by the shepherd Eumolpus and the swineherd Eubuleus (they saw a girl being carried of into the earth which had violently opened up, in a black charriot, driven by an invisible driver), she was called Kore. It is when she is taken that she becomes Persephone ('she who brings destruction'). Hekate was also reported to have told Demeter that she had heard Kore scream that she was being raped. 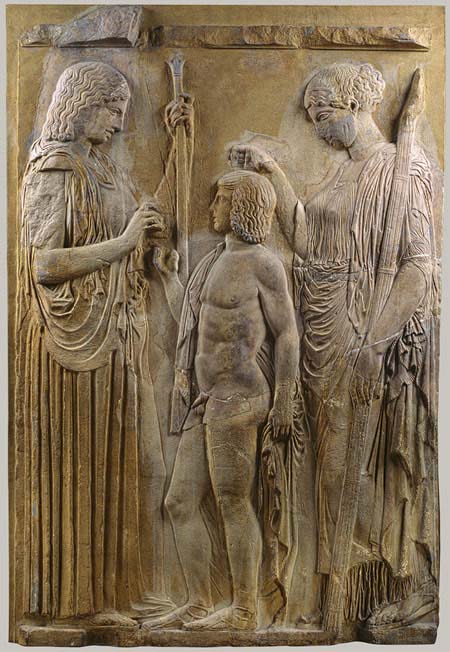 Demeter was searching for her daughter Persephone (also known as Kore). Having taken the form of an old woman called Doso, she received a hospitable welcome from Celeus, the King of Eleusis in Attica (and also Phytalus). He asked her to nurse Demophon and Triptolemus, his sons by Metanira.

As a gift to Celeus, because of his hospitality, Demeter planned to make Demophon as a god, by coating and anointing him with Ambrosia, breathing gently upon him while holding him in her arms and bosom, and making him immortal by burning his mortal spirit away in the family hearth every night. She put him in the fire at night like a firebrand or ember without the knowledge of his parents.

Demeter was unable to complete the ritual because his mother Metanira walked in and saw her son in the fire and screamed in fright, which angered Demeter, who lamented that foolish mortals do not understand the concept and ritual.

Some scholars believe the Demophon story is based on an earlier prototypical folk tale. 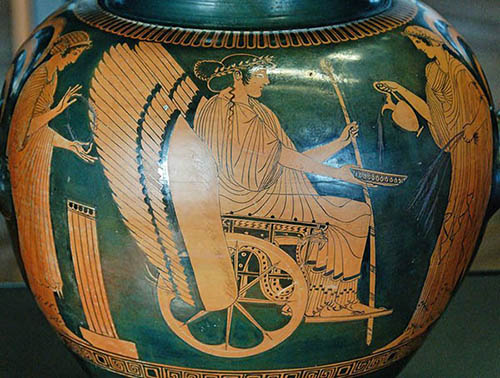 Demeter was usually portrayed on a chariot, and frequently associated with images of the harvest, including flowers, fruit, and grain. She was also sometimes pictured with Persephone.

Demeter is not generally portrayed with a consort: the exception is Iasion, the youth of Crete who lay with Demeter in a thrice-ploughed field, and was sacrificed afterwards Đ by a jealous Zeus with a thunderbolt, Olympian mythography adds, but the Cretan site of the myth is a sign that the Hellenes knew this was an act of the ancient Demeter.

Demeter placed Aethon, the god of famine, in Erysichthon's gut, making him permanently famished. This was a punishment for cutting down trees in a sacred grove.


Demeter is a main belt asteroid 26km in diameter, which was discovered in 1929 by K. Reinmuth at Heidelberg.