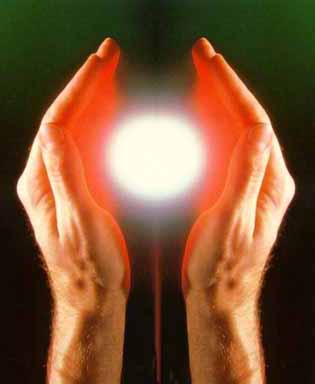 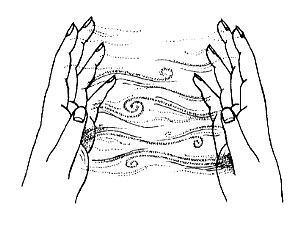 The human body is electromagnetic and electrostatic energy, often called an auric field. It responds to sound, light and color and changes from moment to moment.

The Kinetic energy of an object is the extra energy it possesses due to its motion. It is defined as the work needed to accelerate a body of a given mass from rest to its current velocity. Having gained this energy during its acceleration, the body maintains this kinetic energy unless its speed changes. Negative work of the same magnitude would be required to return the body to a state of rest from that velocity.

When you we rub your hands together very quickly, there is friction between the palms. This also occurs if the palms are not touching but in close proximity. Friction is the force of two surfaces in contact, or the force of a medium acting on a moving object (i.e air on an aircraft). It is not a fundamental force, as it is derived from electromagnetic forces between atoms. When contacting surfaces move relative to each other, the friction between the two objects converts kinetic energy into thermal energy, or heat. Friction between solid objects is often referred to as dry friction and between a solid and a gas or liquid as fluid friction. Internal friction is related to a body's ability to recover from external deformation. Contrary to popular belief, sliding friction is not caused by surface roughness, but by chemical bonding between the surfaces. Surface roughness and contact area, however, do affect sliding friction for micro- and nano-scale objects where surface area forces dominate inertial forces.

There are various techniques healers and energy workers use involving kinetic energy.

Potential Energy can be thought of as energy stored within a physical system. This energy can be released or converted into other forms of energy, including kinetic energy. It is called potential energy because it has the potential to change the states of objects in the system when the energy is released.

Informally, potential energy exists when there is a force that tends to pull an object back towards some original position when it is moved. For example, when a spring is stretched to the left, it exerts a force to the right so as to return to its original, un-stretched position. Or, suppose that a weight is lifted straight up. The force of gravity will try to bring it back down to its original position. The initial steps of stretching the spring and lifting the weight both require energy to perform. The principle of conservation of energy states that energy cannot be created or destroyed, so this energy does not disappear. Instead it is stored as potential energy. If the spring is released or the weight is dropped, this stored energy will reappear as kinetic energy as the restoring force Ń elasticity in the case of the spring and gravity in the case of the weight - accelerates the object back towards its original position.

The more formal definition is that potential energy is the energy of position, that is, the energy an object is considered to have due to its position in space.


Creating a Plasma Ball Between the Palms of Your Hands 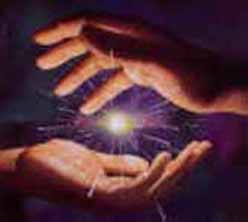 You can sit or stand for this activity.

Your hands should be clean, dry and room temperature.

Place your elbows close to your body or on a table in front of you.

Place the palms of your hands facing each other, between one and two inches apart, but not touching.

Rotate your hands slowly, in small circles, at first, than faster.

They will automatically move in separate directions.

Feel the energy moving between your palms.

You are building a plasma ball of energy.

When you stop moving your hands, hold them in a cupped position.

You should feel the plasma ball.

The intensity of the energy created between the hands varies from person to person and experience to experience.

For some people there will be little energy transferred, but for others the effect of using this plasma ball can really move and shift things around. Some people can throw the ball across a room, moving an object.

When you are finished, the energies may appear to dissipate or you may have to ground yourself but placing your hands flat on the floor, or just allow them to dissipate.