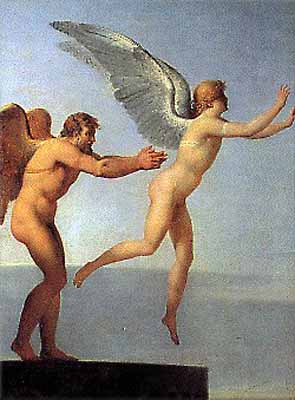 Daedalus was a famous architect, inventor, and master craftsman. He created many objects that figure prominently in various myths. Among his inventions and creations were the wooden cow he constructed for the queen Pasiphae, the Labyrinth of the Minotaur at Knossos, artificial wings for himself and his son Icarus, and he was even said to have invented images.

His homeland was Athens but his parentage is uncertain. Alcippe, Merope and Iphinoe are all mentioned at different times as being his mother. His father's identity was never precisely established but many claim that it was Metion, son of Erectheus.

For a short time, his apprentice was his sister's son Perdix. Other sources claim that his apprentice was his nephew Talos. At the age of twelve Talos displayed a skill that nearly rivaled his mentor's. When Daedalus feared that the boy would surpass him in talent, he murdered the boy by tossing him from the Acropolis of Athens. He was then tried at the Areiopagus, which was the ancient Greek court, and banished from his home city of Athens.

He fled to the island of Crete, where he began to work at the court of King Minos and Queen Pasiphae, in the magnificent palace of Knossos. There he constructed a wooden cow for the queen to hide in to satisfy her amorous longings for a white bull sent by Poseidon, and by which she became pregnant with the Minotaur.

When the Minotaur was born, Daedalus built the Labyrinth to contain the monstrous half-man, half-bull. For years Minos demanded a tribute of youths from Athens to feed the creature. Eventually, the hero Theseus came to Crete to attempt to slay the Minotaur. Ariadne, daughter of Minos and Pasiphae, fell in love with Theseus and asked Daedalus to help him. Daedalus gave her a flaxen thread for Theseus to tie to the door of the Labyrinth as he entered, and by which he could find his way out after killing the monster. Theseus succeeded, and escaped Crete with Ariadne. Minos, enraged at the loss of his daughter, not to mention the killing of the Minotaur, shut Daedalus and his son Icarus into the Labyrinth.

Daedalus managed to get out of the Labyrinth - after all, he had built it and knew his way around. Daedalus decided that he and his son Icarus had to leave Crete and get away from Minos, before he brought them harm. However, Minos controlled the sea around Crete and there was no route of escape there. Daedalus realized that the only way out was by air.

They successfully flew from Crete, but Icarus grew exhilarated by the thrill of flying and began getting careless. Flying too close to the sun god Helios, the wax holding together his wings melted from the heat and he fell to his death, drowning in the sea. The Icarian Sea, where he fell, was named after him and it is said that Heracles (Hercules), who passed by, gave him burial. Daedalus lamented his dead son and then continued to Sicily, where he came to stay at the court of Cocalus in a place called Camicus.

King Minos then went in pursuit of Daedalus, hoping to trick the great inventor into revealing himself. At each city he visited, Minos offered a reward to whomever could thread a spiral seashell. Eventually, Minos came to Camicus in Sicily and presented the contest at Cocalus' court. Cocalus knew of Daedalus' talents, and gave the shell to him. The clever Daedalus tied the string to an ant, place the ant at one end of the shell, and allowed the ant to walk through the spiral chambers until it came out the other end.

When Minos saw that someone had solved the puzzle, he demanded that Cocalus surrender Daedalus. Cocalus promised to do so, but he persuaded Minos to take a bath and stay for some entertainment. Minos agreed, and was consequently murdered by Cocalus' daughters, who had been so taken by the toys and gifts which Daedalus had bestowed upon them and did not want any harm to come to him.

Daedalus eventually left Camicus, much to the dismay of king Cocalus and his daughters, and ended up in Sardinia with a group led by Iolaus, who was a nephew of Heracles. 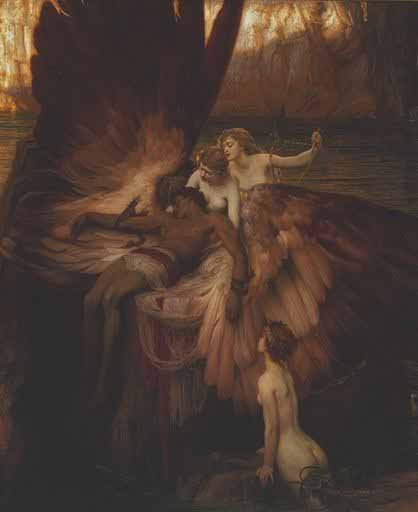 As told by Thomas Bullfinch

The labyrinth from which Theseus escaped by means of the clew of Ariadne was built by Daedalus, a most skilful artificer. It was an edifice with numberless winding passages and turnings opening into one another, and seeming to have neither beginning nor end, like the river Maeander, which returns on itself, and flows now onward, nowbackward, in its course to the sea. Daedalus built the labyrinth for King Minos, but afterwards lost the favour of the king, and was shut up in a tower. He contrived to make his escape from his prison, but could not leave the island by sea, as the king kept strict watch on all the vessels, and permitted none to sail without being carefully searched.

"Minos may control the land and sea," said Daedalus, "but not the regions of the air. I will try that way." So he set to work to fabricate wings for himself and his young son Icarus. He wrought feathers together, beginning with the smallest and adding larger, so as to form an increasing surface. The larger ones he secured with thread and the smaller with wax, and gave the whole a gentle curvature like the wings of a bird.

Icarus, the boy, stood and looked on, sometimes running to gather up the feathers which the wind had blown away, and then handling the wax and working it over with his fingers, by his play impeding his father in his labours. When at last the work was done, the artist, waving his wings, found himself buoyed upward, and hung suspended, poising himself on the beaten air. He next equipped his son in the same manner and taught him how to fly, as a bird tempts her young ones from the lofty nest into the air. When all was prepared for flight he said, "Icarus, my son, I charge you to keep at a moderate height, for if you fly too low the damp will clog your wings, and if too high the heat will melt them. Keep near me and you will be safe."

While he gave him these instructions and fitted the wings to his shoulders, the face of the father was wet with tears, and his hands trembled. He kissed the boy, not knowing that it was for the last time. Then rising on his wings, he flew off, encouraging him to follow, and looked back from his own flight to see how his son managed his wings.

As they flew the ploughman stopped his work to gaze, and the shepherd leaned on his staff and watched them, astonished at the sight, and thinking they were gods who could thus cleave the air.

They passed Samos and Delos on the left and Lebynthos on the right, when the boy, exulting in his career, began to leave the guidance of his companion and soar upward as if to reach heaven. The nearness of the blazing sun softened the wax which held the feathers together, and they came off. He fluttered with his arms, but no feathers remained to hold the air.

While his mouth uttered cries to his father it was submerged in the blue waters of the sea which thenceforth was called by his name. His father cried, "Icarus, Icarus, where are you?" At last he saw the feathers floating on the water, and bitterly lamenting his own arts, he buried the body and called the land Icaria in memory of his child. Daedalus arrived safe in Sicily, where he built a temple to Apollo, and hung up his wings, an offering to the god.

Daedalus was so proud of his achievements that he could not bear the idea of a rival. His sister had placed her son Perdix under his charge to be taught the mechanical arts. He was an apt scholar and gave striking evidences of ingenuity. Walking on the seashore he picked up the spine of a fish. Imitating it, he took a piece of iron and notched it on the edge, and thus invented the saw. He, put two pieces of iron together, connecting them at one end with a rivet, and sharpening the other ends, and made a pair of compasses. Daedalus was so envious of his nephew's performances that he took an opportunity, when they were together one day on the top of a high tower to push him off. But Minerva (Athena), who favors ingenuity, saw him falling, and arrested his fate by changing him into a bird called after his name, the Partridge. This bird does not build his nest in the trees, nor take lofty flights, but nestles in the hedges, and mindful of his fall, avoids high places.