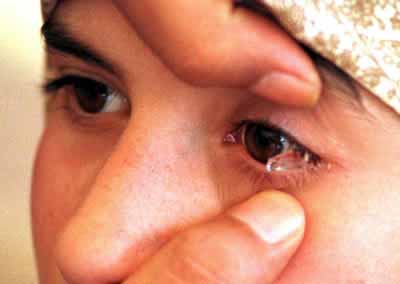 Although the crystals are as sharp as cut glass, Hasnah says she feels no pain and doctors cannot explain the phenomenon. Her father wants her to see specialists in Europe or America to find an explanation. Eye surgeon Dr Nasib El-Lakkis said he will be sending details of this case to an eye surgeons conference in Spain.

Twelve-year-old Hasnah Mohamed Meselmani produced razor-sharp glass crystals from her eyes, Share International reported at the end of 1996. Nabil Matraji, our correspondent in the Lebanon, contacted the Meselmani family to find out more about the amazing phenomenon, which lasted from March till November 1996. A discussion with Hasnah confirmed that the unseen hand behind the crystal miracle was that of Maitreya. A report about the mysterious "white knight" follows.

Commotion stirred the Arab world: a girl was making hard glass crystals, sharp enough to cut paper, appear from her eyes seven times a day without any apparent injury to herself - it had to be some kind of miracle. The 12-year-old Hasnah Mohamed Meselmani became the centre of attention. Religious authorities and scientists sought answers to the riddle.

The answer soon came: it was 'fraud', and the girl had admitted it, at least that is how the story was reported. Many people were upset and disappointed, others, less inclined to believe in inexplicable 'miracles', were relieved. Lebanon and other Arab countries declared the file closed and silence descended on the story of Hasnah Mohamed Meselmani. And yet certain questions remained unanswered. For instance, questions about the nature of the so-called fraud. How did Hasnah manage to pull the whole thing off with crystals coming out of her eyes in full view of television cameras? If the television pictures were authentic and anything to go by, then fraud would seem to be out of the question: the girl's eye was filmed in close-up and showed pieces of glass slowly pushing out of her eyes as if coming from the retina.

It all began in March 1996. She was at school when she felt something strange in her left eye - her first piece of crystal, which, understandably, troubled her. Back home, she told her family what had happened and, while she was doing so, a second piece of crystal appeared in her eye. Her father took her to the city of Chtaura to see Dr Araji, an ophthalmologist. She stayed in his clinic for two weeks, and the crystals kept flowing out of her eye. Dr Araji certified that the pieces were real crystals and said he had no scientific explanation of the phenomenon. It could only be understood, he thought, as an act of God. A few days later, Hasnah was told the same thing in another strange event.

"One night," she told Nabil, "I was still awake when I heard someone tapping at the window. I got up, walked to the window and there I saw a man dressed in white. He was sitting on a white horse, he smiled at me and called me by name. He asked me if I would go outside to talk to him." Hasnah went out through the front door.

There stood the "white knight", as she calls him, waiting for her. He was dressed from head to foot in a white tunic, which also covered his head and face.

"The white knight" said she needn't be afraid and he introduced himself to Hasnah as a "messenger from God". A conversation developed between them about which Hasnah revealed no further details, apart from the fact that the white knight led her to understand that it was he who had been behind the crystal tears, and that all went according to God's will. There was a witness to the conversation: Hasnah's little brother had followed her outside, heard his sister speaking, but failed to see who she was talking to. "The white knight" visited her a few times again and gave her advice and various warnings. When Hasnah asked when the tears would stop the answer was: "When God wills."

Hasnah remembered some of the words the "white knight" spoke to her in her dream. He kissed her on the forehead and said: "I will always be with you, even when you don't see me."

A fascinating aside: during one of her meetings with the white knight he advised Hasnah that her whole family should leave their home temporarily because something unpleasant was about to happen. The family followed the advice - all except one son. The following day he was involved in a traffic accident, and although his car was a write-off, Hasnah's brother escaped without a scratch. The same evening she met the white knight yet again. He asked: "Didn't I say that ALL of you should leave the house?"

The story became public: television stations, magazines and newspapers flocked to the house of the Meselmani family to meet the girl with the crystal tears.

Lord Maitreya is associated with the appearance of the "white knight" on a white horse. In the Hindu tradition, Vishnu is awaited as the Kalki-avatar, also a white rider. In the Bible's Book of Revelation the rider on the white horse is also spoken of ("and behold a white horse; and he that sat upon him [was] called Faithful and True"; 19:11).

In the Persian tradition the same applies to Sosiosh, about whom Helena Petrovna Blavatsky wrote in her Theosophical Glossary: "Sosiosh - The Mazdean Saviour who, like Vishnu, Maitreya Buddha and others, is expected to appear on a white horse at the end of the cycle to save mankind.

That Maitreya appeared dressed in white with his face covered at first is not without significance within the Muslim tradition: it is forbidden to show the faces or make images of holy people or divine envoys.