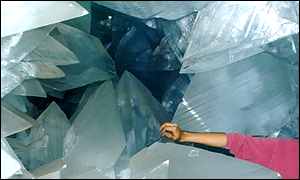 So clear, you can read text through the crystals

A gigantic cave of crystals has been discovered in an old silver mine in Spain.

The geode, which is eight metres (26ft) long and crammed full of gypsum prisms, has been put under police guard to prevent souvenir hunters from raiding the extraordinary natural phenomenon.

The geologist who announced the find, Javier Garcia-Guinea, wants to turn the site into a tourist attraction.

He told BBC News Online that up to 10 people could sit inside the geode - an object normally small enough to hold in your hands.

"Bending your body between the huge crystals is an incredible sensation," he said. "When I was young I dreamt of flying, but never to go into a geode internally covered with transparent crystals."

Rumours of the existence of a giant gypsum geode had been circulating among mineral collectors since December.

But it was only on 28 May that Javier Garcia-Guinea, from the Spanish Council for Scientific Research (CSIC) in Madrid, finally managed to track down the cave.

"The crystals are absolutely transparent and perfect," he said. The geologist has searched the international literature and can find no other object to compare in size.

The geode - essentially a rock cavity which has become lined with crystalline deposits - is eight meters in length, 1.8 metres wide and 1.7 metres high (26 feet by six by six).

The crystals of gypsum - hydrous calcium sulphate - are about half a metre in length. 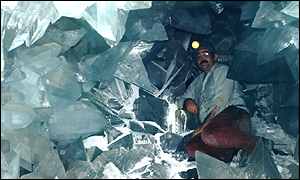 Javier Garcia-Guinea is concerned about theft

The giant geode may have formed at the same time as a geological event called the Messinian salinity crisis. At this time, about six million years ago, the Mediterranean Ocean evaporated, depositing thick layers of salts. The same, salt-saturated fluids could have filled up the Spanish geode, which lies near the coast.

The drying out of the Mediterranean was probably caused by a restriction in the straits of Gibraltar, the sea's only connection with rest of the Earth's oceans.

Javier Garcia-Guinea has blocked the entrance to the geode with five tonnes of rock and called in the police to guard the location. After a period of scientific study, he hopes the cave can be turned into a major local tourist attraction.

"The next possibility is to drill a hole to fix a window in the geode to show the tourists. Almeria is little town with nice beaches just four kilometres from the mine and is well known to English holidaymakers." 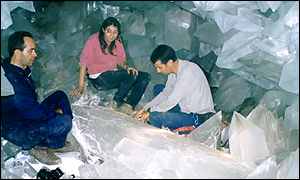