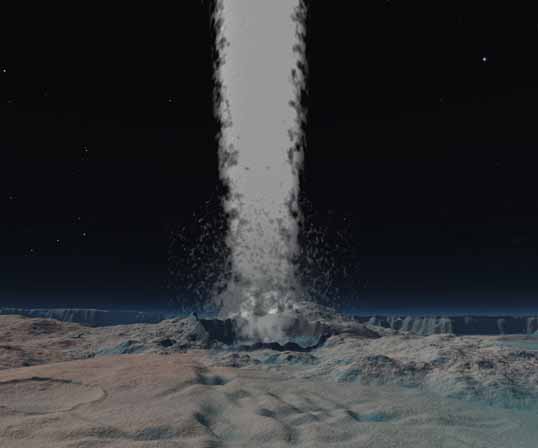 A cryovolcano (colloquially known as an ice volcano) is, literally, an icy volcano. Cryovolcanoes form on icy moons, and possibly on other low-temperature astronomical objects (e.g., Kuiper belt objects). Rather than molten rock, these volcanoes erupt volatiles such as water, ammonia or methane

Collectively referred to as cryomagma or ice-volcanic melt, these substances are usually liquids and form plumes, but can also be in vapour form. After eruption, cryomagma condenses to a solid form when exposed to the very low surrounding temperature.

The energy required to melt ices and produce cryovolcanoes usually comes from tidal friction. It has also been suggested that translucent deposits of frozen materials could create a sub-surface greenhouse effect that would accumulate the required heat.

Some hypothesize that the Kuiper belt object Quaoar exhibited cryovolcanism in the past. Radioactive decay could also provide the energy necessary for such activity. Cryovolcanoes can emit water mixed with ammonia. Such a mixture would melt at -95ˇC, creating an extremely cold liquid that would flow out of the volcano.

Ice volcanoes were first observed on Neptune's moon Triton during the Voyager 2 flyby in 1989.

On November 27, 2005 Cassini photographed geysers on the south pole of Enceladus (See also: Cryovolcanism on Enceladus).

Indirect evidence of cryovolcanic activity was later observed on several other icy moons of our Solar System, including Europa, Titan, Ganymede, and Miranda. Cassini has observed several features thought to be cryovolcanoes on Titan. Such volcanism is now believed to be a significant source of the methane found in Titan's atmosphere.

In 2007, observations by the Gemini Observatory showing patches of ammonia hydrates and water crystals on the surface of Pluto's moon Charon suggested the presence of active cryovolcanoes/cryo-geysers.


'Ice volcano' identified on Saturn's moon Titan   BBC - December 15, 2010
Scientists think they now have the best evidence yet for an ice volcano on Titan, the largest moon of Saturn. The Cassini probe has spotted a 1,500m-high mountain with a deep pit in it, and what looks like a flow of material on the surrounding surface. The new feature, which has been dubbed "The Rose", was seen with the probe's radar and infrared instruments. Titan has long been speculated to have cryovolcanoes but its hazy atmosphere makes all observations very difficult. 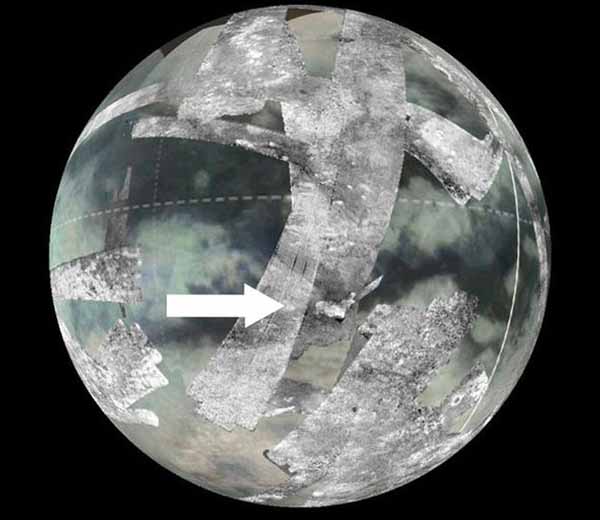 For the first time, scientists now have solid evidence for an ice volcano on Saturn's moon Titan, according to a new study.