Crop Circle Theories Crop circles are either created by humans or ... 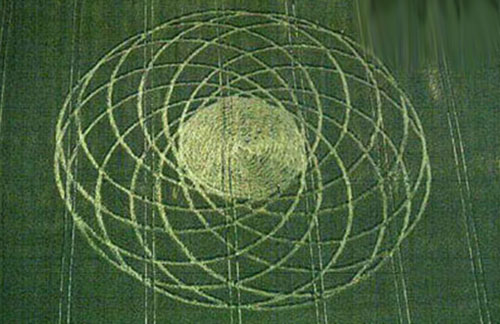 It's all about algorithms and geometry 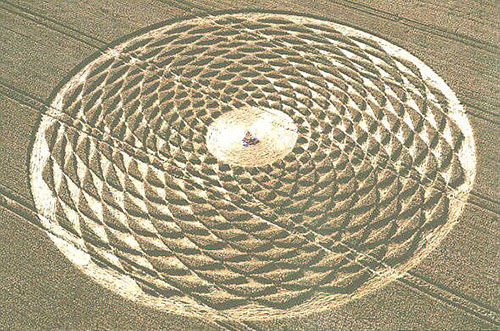 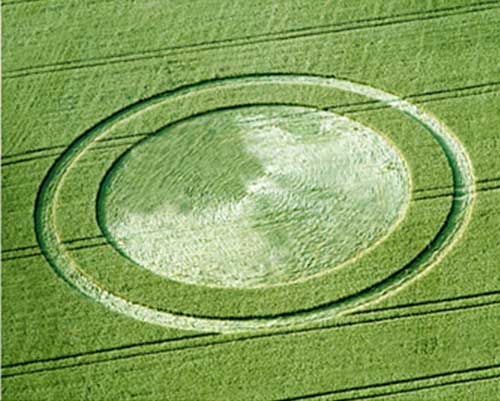 Early examples of this crop formations were simple circular patterns of various sizes, which led some people to speculate that it was a natural phenomenon. Over the years more elaborate and complex geometric patterns emerged with recurring themes - many based on principles of natural sciences and mathematics including fractals. They were to be viewed not as two-dimensional images but as three-dimensional much like simulation theory. 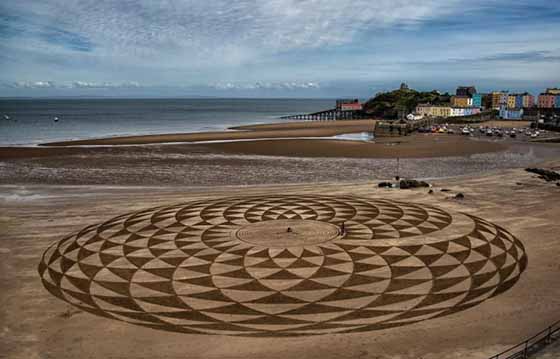 The story behind these mysterious sand murals on Britain's beaches
CNN - October 8, 2018


If you've been frequenting the sandy beaches along the rugged, Welsh Pembrokeshire Coast in Britain, you might have noticed some mysterious shapes appearing in the sand. These intricate murals are beach-based works of art created by local sand muralist Marc Treanor.

Inspired by crop circles, the enigmatic formations that occasionally appear in corn and wheat fields, Treanor forges stunningly intricate patterns and pictures by raking wet sand. When he's done, Treanor watches as his hard work is consumed by the crashing waves, but he says that's all part of the experience.

It reminds me of creation - and at this point in reality - being washed away by the flow of the collective unconscious in the sands of time.


The study of the crop circle phenomena is called Cerealogy. Cerealogists commonly refer to these designs as agriglyphs or landscape art - hopefully messages from extraterrestrial visitors.

Crop circles are found in fields, over tree-tops, and in ice and snow. They are a world wide phenomena, highlighted in England.

A crop circle is a sizable pattern created by the flattening of a crop such as wheat, barley, rye, maize, or rapeseed. Crop circles are also referred to as crop formations because they are not always circular in shape. The documented cases have substantially increased from the 1970s to current times, and many self-styled experts alleged an alien origin.

The scientific consensus is that most or all crop circles are man-made, with a few possible exceptions due to meteorological or other natural phenomena. In 1991, more than a decade after the phenomena began, two men, Doug Bower and Dave Chorley, revealed that they had been making crop circles in England since 1978 using planks, rope, hats and wire as their only tools. Others have also come forward to explain how they created the formations but that does not account for many others that still remain unexplained. Although the commonly accepted view today is that crop circles are a man-made phenomenon, paranormal explanations, often including UFOs, are still popular.

2022 - In recent years the excitement over a crop circle formations with hopefully alien connections and contacts has become less and less. Recent discoveries are few and far between, are poorly constructed, and proven to be hoaxes. 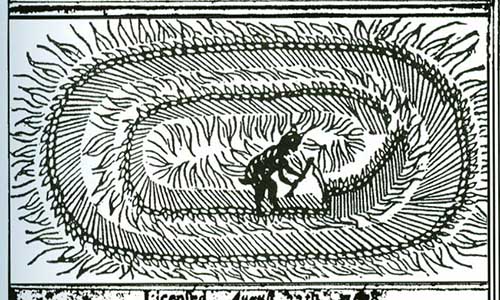 No one knows how far back in history cop formations go. Allegedly, the earliest recorded crop circle is depicted in this 1647 woodcut called the Mowing-Devil. This image depicts a strange creature creating a circular design in a field of corn. The legend suggests that the farmer, disgusted at the wage his mower was demanding for his work, insisted that he would rather have the devil himself perform the task. Proponents of the belief that crop circles are either naturally caused, or are formed by as yet unknown entities, often support their viewpoint with this old tale. It is worth noting, however, that this is little more than a tale - the circular formation supposedly caused by the creature may be coincidental, or may have been caused by any number of natural or human processes.

An apparently more convincing historical report of crop circles was published in the journal Nature in 1880. An amateur scientist named Brandon Meland appears to describe a field containing a number of crop circles, along with his suggestion that they might have been caused by "some cyclonic wind action".

Not long after WWII, the aerial surveys that were being made over large areas of Britain revealed some unexpected phenomena, undetectable from the ground. When the surveys photographed ripening crops or drought-stressed terrain they revealed what were soon termed "crop marks", the differential ripening of the crop that revealed differences in the subsoil. These patterns were found to be caused by the buried remnants of ancient buildings. Archaeological investigations were soon instigated, but, though many previously unsuspected archaeological sites were found, no crop circles were ever recorded. Skeptics argue that this would have pointed to circles as a modern phenomenon, even if the initial pranksters had not revealed themselves; believers reply different agendas may simply be at work in the modern day.

Crop Circles came into prominence in the late 1970s as many circles began appearing throughout the English countryside.

There are numerous reports of electronic and mechanical equipment breaking down in crop circles. Cameras frequently malfunction, and even when they do work, the results may be overexposed, streaked, smeared, or entirely black. Video equipment is also very vulnerable, and often picks up severe interference. Battery draining is quite common, and even fresh power packs can die. Cell phones often fail to operate within a formation but sometimes work perfectly again if taken outside it.

Magnetic compasses frequently behave erratically both inside crop formations and when flying directly over them. Witnesses sometimes report TV, cell phone, smoke alarm and security device interference or malfunctions during nights when a crop circle forms nearby. The night before the appearance of the 1991 Barbury Castle tetrahedron), residents in the nearby village of Broughton experienced a power blackout and many residents reported balls of colored light flying above the field where the formation later manifested, along with a low rumbling noise.