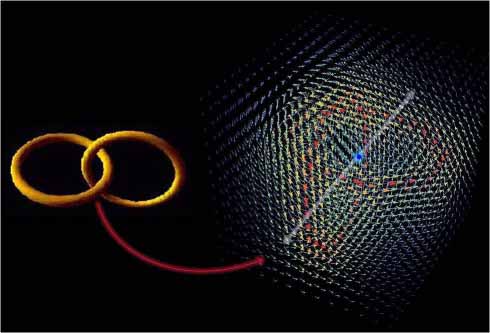 Cracks in the Universe: Physicists are searching for the fingerprints of cosmic strings   PhysOrg - October 12, 2010


The postulated location of Earth (blue dot) and the A1-A3 axis are shown above. Two electroweak strings initially linked form around the electroweak phase transition. The strings decay, but leave a magnetic imprint behind in the highly conducting plasma of the early universe. This magnetic field is carried by the expansion of the universe and today is on the order of Gpc scales.

Physicists are hot on the trail of one of strangest theorized structures in the universe. A team of researchers have announced what they think are the first indirect observations of ancient cosmic strings, bizarre objects thought to have contributed to the arrangement of objects throughout the universe.

First predicted back in the 1970s, cosmic strings are thought to be enormous fault lines that once existed in space. Not to be confused with the subatomic strings of string theory, cosmic strings are widely believed by astrophysicists to have formed billions of years ago, just moments after the Big Bang when the universe was still a soupy mass of extremely hot matter. As the universe cooled, defects formed between different regions of space that cooled in different ways, much like cracks forming in the ice on a frozen pond. These defects in space were the cosmic strings.

Although researchers have not yet directly observed the strings themselves, the team believes they found evidence of them hidden in ancient quasars, enormous black holes that shoot out mighty jets of light and radiation, found at the heart of many galaxies.

The presumed cosmic strings were incredibly narrow, thinner than the diameter of a proton, but so dense that a string less than a mile in length would weigh more than the Earth. As the universe expanded, so too did these strings until they either stretched across the known universe, or into enormous rings thousands of times larger than our galaxy.

"Their magnetic field sort of hitches a ride with the expansion of the universe," said Robert Poltis from the University at Buffalo in N.Y. and lead author of the paper reporting the findings. Poltis' team analyzed the observational data of 355 quasars that reside in the far off corners of the universe. With careful scrutiny of the light emitted by these quasars, it is possible to determine the direction their jets are facing in space. The team found that 183 of them lined up to form two enormous rings that stretch across the sky in a pattern unlikely to have formed by chance.

The team members think that the magnetic fields of the two cosmic strings affected the direction the quasars are pointing. The strings themselves should have long since dissipated by emitting gravitational radiation as they vibrated; however the original effect on the alignment of the quasars would have remained.

"The string itself is gone, but you get the magnetic field imprinted in the early universe," Poltis said. To check their hypothesis, they modeled the theorized effects of the strings on the formation of quasars, and found their predictions closely matched their observations.

Poltis added also that they still need to conduct more follow-up observations and analysis before they can be completely sure they have found evidence of the strings. The detection of a cosmic string would be an important cosmological discovery because of their theorized importance to the formation of galaxies in the early universe. However, other researchers are cautious about the results.

Jon Urrestilla of the University of the Basque Country in Biscay, Spain, doesn't want to jump to conclusions too quickly. He said that Poltis' research is exciting because his team is making testable predictions.

"It is still early to say that this work has discovered evidence for cosmic strings. It is promising, the science is sound, but one should be careful. There are assumptions made that need be checked," Urrestilla said, "But it is yet another piece to the puzzle, and the more predictions we can make from the same basic science into presumably independent effects, the closer we will be to detecting whether strings really were there."

Tanmay Vachaspati from Arizona State University in Tempe, a leading expert on cosmic strings, said he thought that the observation of lined-up quasars was puzzling, but he was skeptical it was caused by cosmic strings. He said that had the strings formed nanoseconds after the big bang, they probably would have decayed so quickly that their magnetic effect wouldn't last until today.

Cosmic strings are hypothetical 1-dimensional (spatially) topological defects which may have formed during a symmetry breaking phase transition in the early universe when the topology of the vacuum manifold associated to this symmetry breaking is not simply connected. It is expected that at least one string per Hubble volume is formed. Their existence was first contemplated by the theoretical physicist Tom Kibble in the 1970's.

The formation of cosmic strings is somewhat analogous to the imperfections that form between crystal grains in solidifying liquids, or the cracks that form when water freezes into ice. The phase transitions leading to the production of cosmic strings are likely to have occurred during the earliest moments of the universe's evolution just after cosmological inflation and are a fairly generic prediction in both Quantum field theory and String theory models of the Early universe.

In string theory the role of cosmic strings can be played by the fundamental strings (or F-strings) themselves that define the theory perturbatively, by D-strings which are related to the F-strings by weak-strong or so called S-duality, or higher dimensional D-, NS- or M-branes that are partially wrapped on compact cycles associated to extra spacetime dimensions so that only one non-compact dimension remains, see the article by Copeland, Myers and Polchinski.

Cosmic strings, if they exist, would be extremely thin with diameters of the same order of magnitude as that of a proton, i.e. ~ 1 fm, or smaller. Given that this scale is much smaller than any cosmological scale these strings are often studied in the zero width, or Nambu-Goto approximation. Under this assumption strings behave as one-dimensional objects and obey the Nambu-Goto action, which is classically equivalent to the Polyakov action that defines the bosonic sector of superstring theory. Even though cosmic strings are thought to be extremely thin they would have immense density and so would represent significant gravitational wave sources. In field theory, the string width is set by the scale of the symmetry breaking phase transition.

In string theory, the string width is set (in the simplest cases) by the fundamental string scale, warp factors (associated to the spacetime curvature of an internal six-dimensional spacetime manifold) and/or the size of internal compact dimensions. (In string theory, the universe is either 10- or 11-dimensional, depending on the strength of interactions and the curvature of spacetime.)

During the expansion of the universe, cosmic strings would form a network of loops, and in the past it was thought that their gravity could have been responsible for the original clumping of matter into galactic superclusters. It is now known that their contribution to the structure formation in the universe is less than 10%.

Other types of topological defects in spacetime are domain walls, monopoles, and textures.