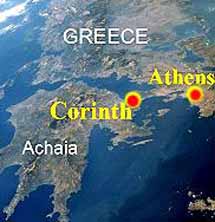 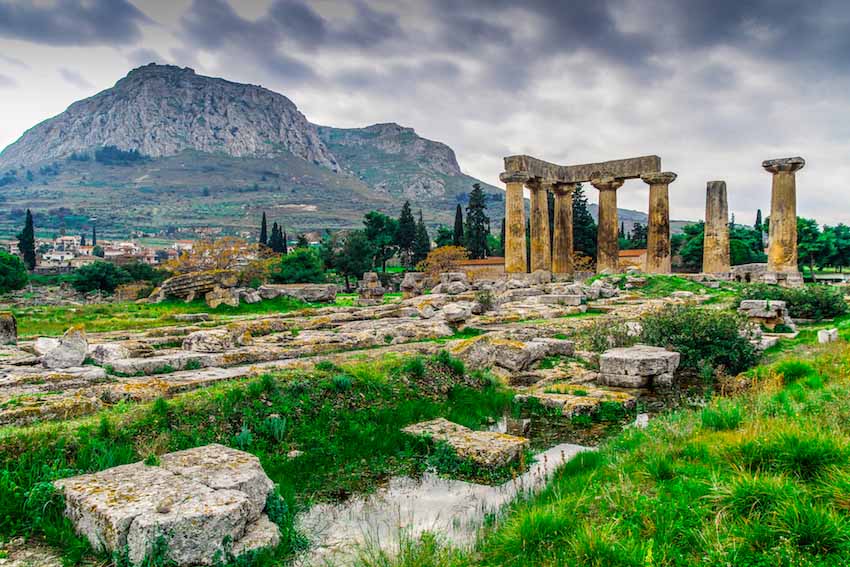 Corinth, or Korinth was a Greek city-state, on the Isthmus of Corinth, the narrow stretch of land that joins the Peloponnesus to the mainland of Greece. To the west of the isthmus lies the Gulf of Corinth, to the east lies the Saronic Gulf. Corinth is about 48 miles (78 km) southwest of Athens. The isthmus, which was in ancient times traversed by hauling ships over the rocky ridge on sledges, is now cut by a cana

The city was founded in the Neolithic Age, circa 6000 BC. According to myth, the city was founded by Corinthos, a descendant of the god Helios (the Sun), while other myths suggest that it was founded by the goddess Ephyra, a daugter of the titan Oceanus, thus the ancient name of the city (also Ephyra). There is evidence that the city was destroyed around 2000 BC.Before the end of the Mycenaean period the Dorians attempted to settle in Corinth. While at first they failed, their second attempt was successful when their leader Aletes followed a different path around the Corinthian Gulf from Antirio.

Some ancient names for the place, such as Korinthos, derive from a pre-Greek, "Pelasgian" language; it seems likely that Corinth was also the site of a Bronze Age Mycenaean palace-city, like Mycenae, Tiryns or Pylos. According to myth, Sisyphus was the founder of a race of ancient kings at Corinth. It was also in Corinth that Jason, the leader of the Argonauts, abandoned Medea.

Later, in classical times the ancient city rivalled Athens and Thebes in wealth, based on the Isthmian traffic and trade. Until the mid-6th century Corinth was a major exporter of black-figure pottery to cities around the Greek world. Athenian potters later came to dominate the market. Corinth's great temple on its ancient acropolis was dedicated to Aphrodite. According to most sources, there were more than one thousand temple prostitutes employed at the Temple of Aphrodite. Corinth was also the host of the Isthmian Games.

In the 7th century BC, when Corinth was ruled by the tyrants Cypselus (r. 657-627 BC) and his son Periander (r. 627-585 BC), the city sent forth colonists to found new settlements: Epidamnus (modern day Durres, Albania), Syracuse, Ambracia (modern day town of Lefkas), Corcyra (modern day town of Corfu) and Anactorium. Periander also founded Apollonia (modern day Fier, Albania) and Potidaea (in Chalcidice). Corinth was also one of the nine Greek sponsor-cities to found the colony of Naukratis in Ancient Egypt. Naucratis was founded to accommodate the increasing trade volume between the Greek world and the pharaohnic Egypt, during the reign of Pharaoh Psammetichus I of the 26th dynasty.

Periander was one of the Seven Wise Men of Greece. During his reign the first Corinthian coins were forged. He was the first to attempt to cut across the Isthmus to create a seaway to allow ship traffic between the Corinthian and the Saronic Gulf. He abandoned the venture due to the extreme technical difficulties he met, but he created the Diolkos (a stone-build overland ramp) instead. The era of the Cypselids, ending with Periander's nephew Psammetichus, named after the hellenophile Egyptian Pharaoh Psammetichus I (see above), was the golden age of the city of Corinth.

During this era Corinthians developed the Corinthian order, the third order of the classical architecture after the Ionic and the Doric. The Corinthian order was the most complicated of the three, showing the accumulation of wealth and the luxurious lifestyle in the ancient city-state, while the Doric order was analogous to the strict and simplistic lifestyle of the older Dorians like the Spartans, and the Ionic was a balance between those two following the philosophy of harmony of Ionians like the Athenians.

The city had two main ports, one in the Corinthian Gulf and one in the Saronic Gulf, serving the trade routes of the western and eastern Mediterranean, respectively. In the Corinthian Gulf lied Lechaion, which connected the city to it's western colonies (Greek: apoikoiai) and Magna Graecia, while in the Saronic Gulf the port of Kenchreai served the ships coming from Athens, Ionia, Cyprus and the rest of the Levant. Both ports had docks for the large war fleet of the city-state.

The city was a major participant in the Persian Wars, offering 40 war ships in the sea Battle of Salamis under the admiral Adeimantos and 5,000 hoplites (wearing their characteristic Corinthian helmets) in the following Battle of Plataea but afterwards was frequently an enemy of Athens and an ally of Sparta in the Peloponnesian League. In 431 BC, one of the factors leading to the Peloponnesian War was the dispute between Corinth and Athens over the Corinthian colony of Corcyra (Corfu), which probably stemmed from the traditional trade rivalry between the two cities.

This weakeness allowed for the subsequent invasion of the Macedonians of the north and the forging of the Corinthian League by Philip II of Macedon against the Persian Empire. Philip's son Alexander the Great was the first general of the Hellenes.In the 4th century BC, Corinth was home to Diogenes of Sinope, one of the world's best known cynics.

The Romans under Lucius Mummius destroyed Corinth following a siege in 146 BC; when he entered the city Mummius put all the men to the sword and sold the women and children into slavery before he torched the city, for which he was given the cognomen Achaicus as the conqueror of the Achaean League (see Battle of Corinth). While there is archeological evidence of some minimal habitation in the years afterwards, Julius Caesar refounded the city as Colonia laus Iulia Corinthiensis in 44 BC shortly before his assassination.

According to Appian, the new settlers were drawn from freedmen of Rome. Under the Romans it became the seat of government for Southern Greece or Achaia (Acts 18:12-16). It was noted for its wealth, and for the luxurious, immoral and vicious habits of the people. It had a large mixed population of Romans, Greeks, and Jews.

When Paul first visited the city (AD 51 or 52), Gallio, the brother of Seneca, was proconsul. Paul resided here for eighteen months (18:1-18). Here he first became acquainted with Aquila and Priscilla, and soon after his departure Apollos came from Ephesus. Although he intended to pass through Corinth the second time before he visited Macedonia, circumstances were such, in the absence of Titus, that he went from Troas to Macedonia, and then likely passed into Corinth for a "second benefit" (2 Corinthians 1:15), and remained for three months, according to Acts 20:3.

During this second visit in the spring of 58 it is likely the Epistle to the Romans was written. Paul's First Epistle to the Corinthians reflects the difficulties of maintaining a Christian community in such a cosmopolitan city.

The city was destroyed by an earthquake in 375 and again in 551.

During Alaric's invasion of Greece, in 395Đ396, Corinth was one of the cities he despoiled, selling many of its citizens into slavery.

During the reign of Byzantine emperor Justinian I, a large stone wall was erected from the Saronic to the Corinthian gulf, protecting the city and the Peloponnesean peninsula from the barbarian invasions of the north. The stone wall was about six miles (10 km) long and was named Examilion (exi=six in Greek). During this era Corinth was the seat of the Thema of Hellas (representing modern day Greece).

In the 12th century (during the reign of the Comnenus dynasty), the wealth of the city, generated from the silk trade to the Latin states of western Europe, attracted the attention of the Sicilian Normans under the Roger of Sicily, who plundered it in 1147. Corinth