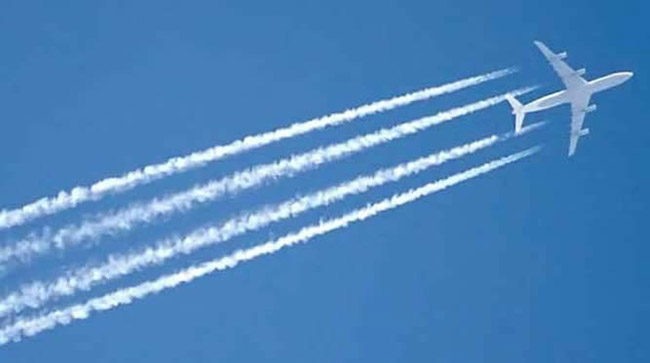 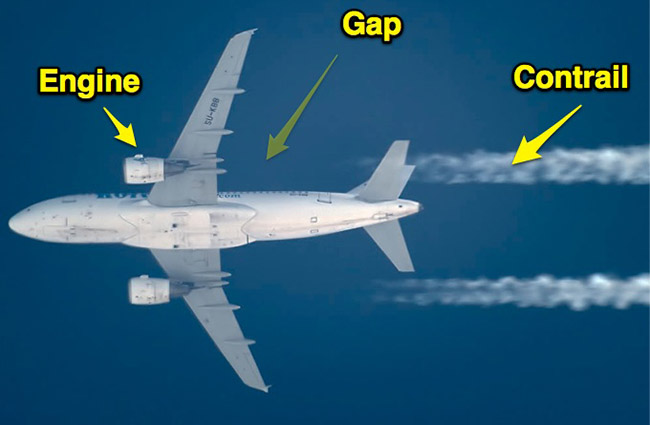 Contrails - short for "condensation trails" or vapor trails - are line-shaped clouds sometimes produced by aircraft engine exhaust, typically at aircraft cruise altitudes several miles above the Earth's surface. Contrails are composed primarily of water, in the form of ice crystals. The combination of water vapor in aircraft engine exhaust and the low ambient temperatures that often exists at these high altitudes allows the formation of the trails. Impurities in the jet exhaust from the fuel, including sulfur compounds (0.05% by weight in jet fuel) provide some of the particles that can serve as sites for water droplet growth in the exhaust and, if water droplets form, they might freeze to form ice particles that compose a contrail Their formation can also be triggered by changes in air pressure in wingtip vortices or in the air over the entire wing surface.

Depending on the temperature and humidity at the altitude the contrails form, they may be visible for only a few seconds or minutes, or may persist for hours and spread to be several miles wide, eventually resembling natural cirrus or altocumulus clouds. Persistent contrails are of interest to scientists because they increase the cloudiness of the atmosphere. The resulting cloud forms may resemble cirrus, cirrocumulus, or cirrostratus, and are sometimes called cirrus aviaticus. Persistent spreading contrails are thought by some, without overwhelming scientific proof, to have a significant effect on global climate. Read more

In these pics the contrails look like shooting stars. 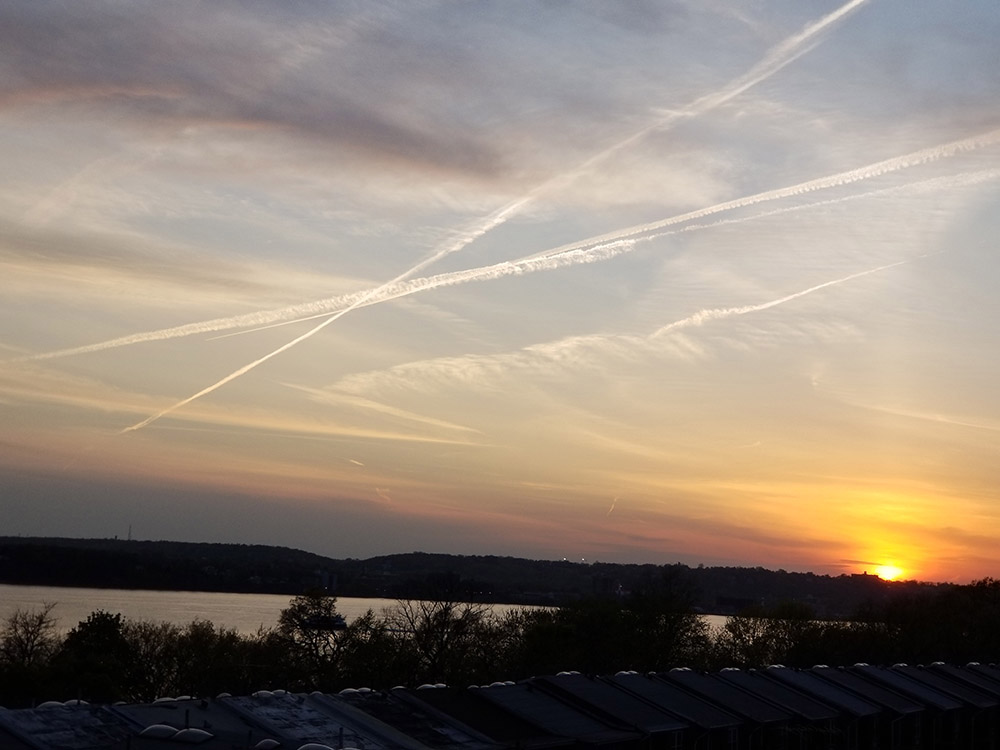 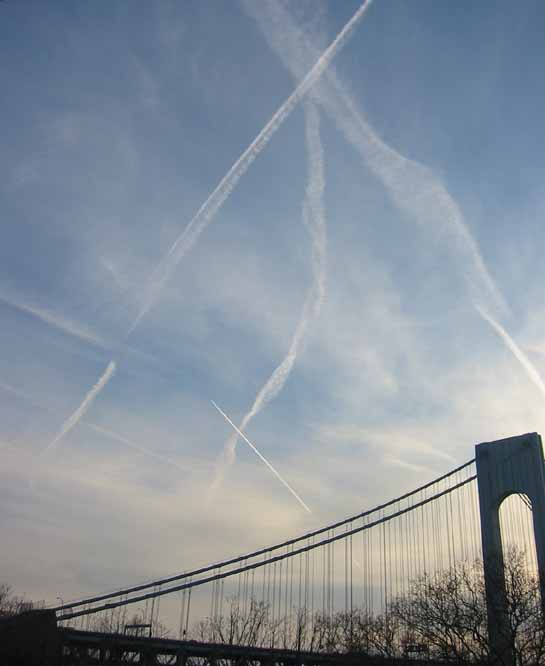 Contrails and Sunset over the Verrazano Bridge - March 2016 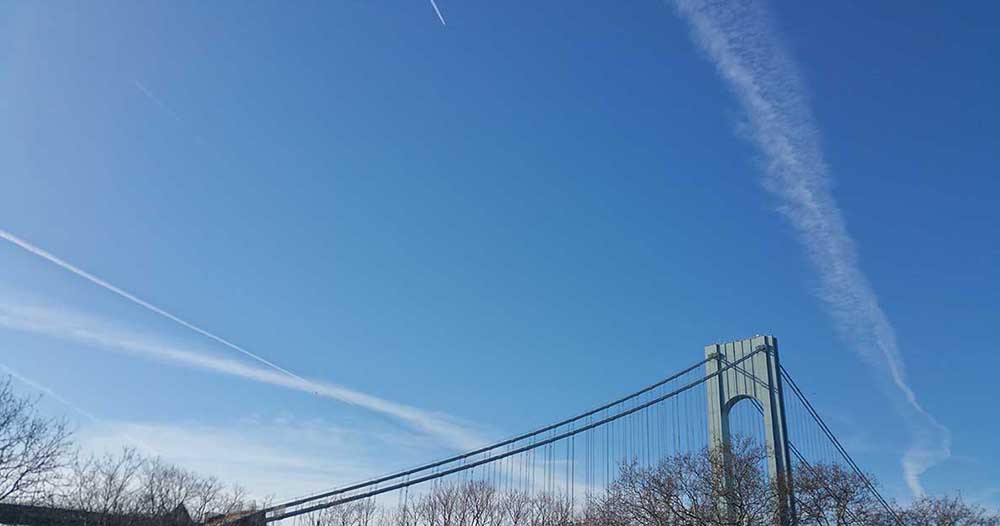 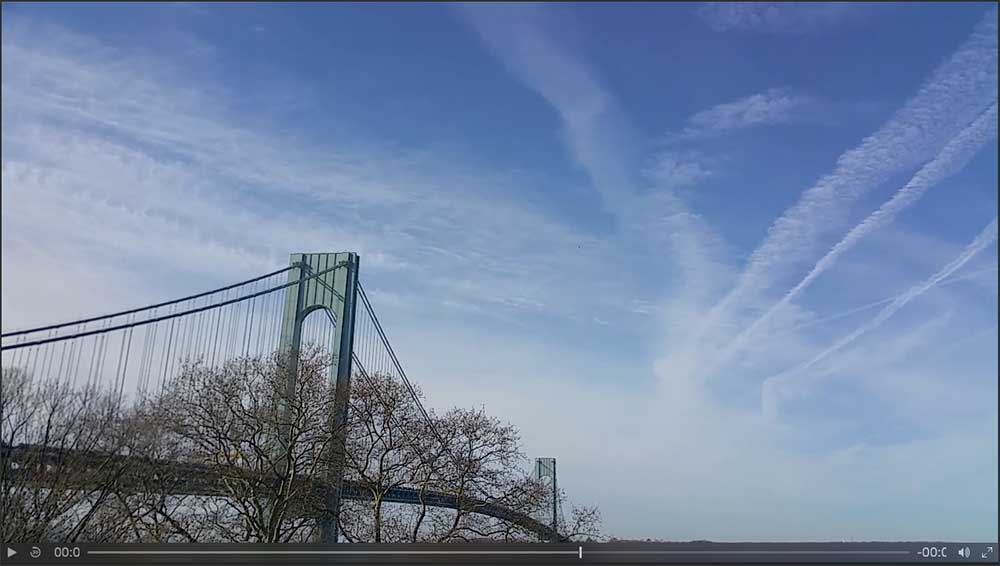 The chemtrail conspiracy theory posits the erroneous belief that long-lasting condensation trails are "chemtrails" consisting of chemical or biological agents left in the sky by high-flying aircraft, sprayed for nefarious purposes undisclosed to the general public. Believers in this conspiracy theory say that while normal contrails dissipate relatively quickly, contrails that linger must contain additional substances. Those who subscribe to the theory speculate that the purpose of the chemical release may be solar radiation management, weather modification, psychological manipulation, human population control, biological or chemical warfare, or testing of biological or chemical agents on a population, and that the trails are causing respiratory illnesses and other health problems.

The claim has been dismissed by the scientific community. There is no evidence that purported chemtrails differ from normal water-based contrails routinely left by high-flying aircraft under certain atmospheric conditions. Although proponents have tried to prove that chemical spraying occurs, their analyses have been flawed or based on misconceptions. Because of the persistence of the conspiracy theory and questions about government involvement, scientists and government agencies around the world have repeatedly explained that the supposed chemtrails are in fact normal contrails.