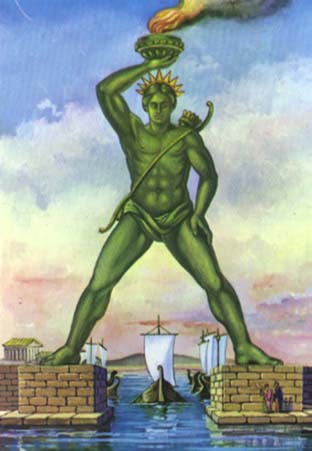 The Colossus of Rhodes was a giant statue of the god Helios, erected on the Greek island of Rhodes by Chares of Lindos between 292 BC and 280 BC. It was roughly the same size as the Statue of Liberty in New York, although it stood on a lower platform. It was one of the Seven Wonders of the World.

Alexander the Great died at an early age in 323 BC without having had time to put into place any plans for his succession. Fighting broke out among his generals, the Diadochi, with three of them eventually dividing up much of his empire in the Mediterranean area.

During the fighting Rhodes had sided with Ptolemy, and when Ptolemy eventually took control of Egypt, Rhodes and Ptolemaic Egypt formed an alliance which controlled much of the trade in the eastern Mediterranean. Another of Alexander's generals, Antigonus I Monophthalmus, was upset by this turn of events.

In 305 BC he had his son Demetrius (now a famous general in his own right) invade Rhodes with an army of 40,000. However, the city was well defended, and Demetrius had to start construction of a number of massive siege towers in order to gain access to the walls.

The first was mounted on six ships, and these blew over in a storm before they could be used. He tried again with an even larger land-based tower named Helepolis, but the Rhodian defenders stopped this by flooding the land in front of the walls so the tower could not move.

In 304 BC a relief force of ships sent by Ptolemy arrived, and Demetrius's army left in a hurry, leaving the majority of their siege equipment. Despite his failure at Rhodes, Demetrius earned the nickname Poliorcetes, "besieger of cities", by his successes elsewhere.

To celebrate their victory, the Rhodians decided to build a giant statue of their patron god Helios. Construction was left to the direction of Chares, a native of Rhodes, who had been involved with large-scale statues before. His teacher, the famed sculptor Lysippus, had constructed a 60-foot-high statue of Zeus. In order to pay for the construction of the Colossus, the Rhodians sold all of the siege equipment that Demetrius left behind in front of their city.

Ancient accounts (which differ to some degree) describe the structure as being built around several stone columns (or towers of blocks) on the interior of the structure, standing on a 15-metre-high (50 feet) white marble pedestal near the Mandraki harbour entrance (others claim on a breakwater in the harbor). Iron beams were driven into the stone towers, and bronze plates attached to the bars formed the skinning.

Much of the material was melted down from the various weapons Demetrius's army left behind, and the abandoned second siege tower was used for scaffolding around the lower levels. Upper portions were built with the use of a large earthen ramp. The statue itself was over 34 metres (110 feet) tall. After 12 years, in 280 BC, the great statue was completed. 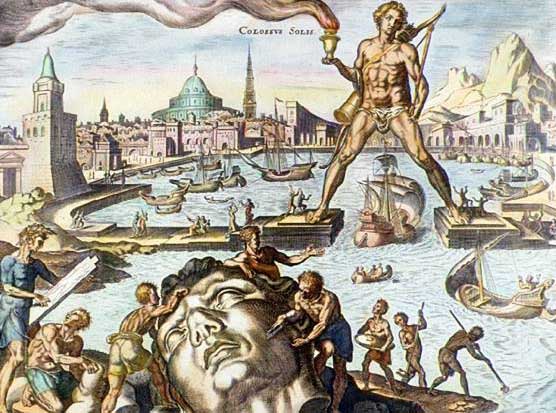 The statue stood for only 56 years until Rhodes was hit by an earthquake in 224 BC. The statue snapped at the knees and fell over onto the land. Ptolemy III offered to pay for the reconstruction of the statue, but an oracle made the Rhodians afraid that they offended Helios, and they declined to rebuild it. The remains lay on the ground for over 800 years, and even broken, they were so impressive that many travelled to see them.

Pliny the Elder remarked that few people could wrap their arms around the fallen thumb and that each of its fingers was larger than most statues. In AD 654 an Arab force under Muawiyah I captured Rhodes, and according to the chronicler Theophanes, the remains were sold to a travelling salesman from Edessa. The purchaser had the statue broken down, and transported the bronze scrap on the backs of 900 camels to his home. Pieces continued to turn up for sale for years, after being found on the caravan route.

The harbor-straddling Colossus was a figment of later imaginations. Many older illustrations (above) show the statue with one foot on either side of the harbor mouth with ships passing under it: "... the brazen giant of Greek fame, with conquering limbs astride from land to land ..." (from "The New Colossus", the poem found at the base of the Statue of Liberty). Shakespeare's Cassius in Julius Caesar (I,ii,136-38) says of Caesar:

Why man, he doth bestride the narrow world
Like a Colossus, and we petty men
Walk under his huge legs and peep about
To find ourselves dishonourable graves


The Colossus in Modern Times

In 1989, a stone construction resembling a gigantic human fist was found in the sea of Rhodes. It was supposed that it was the first discovery of a part of the Colossus. However it was decided that it was only stone and mud debris thrown in the sea by a bulldozer.

There has been much debate as to whether to rebuild the Colossus. Those for it say it would boost tourism in Rhodes greatly, but those against construction say it would cost too large an amount (over 100 million euro). This idea has been proposed many times since it was first proposed in 1970 but, due to lack of funding, work has not yet started. The plans for the Colossus have been in the works since 1998 by the Greek-Cypriot artist Nikolaos Kotziamanis.

In Disney's Hercules the satyr Philoctetes lives on the Isle of Rhodes, and there are visible bits of statue on the island such as the head and still standing feetIn the game Age of Mythology, a Colossus can be summoned to fight in the player's army. It has a very statuesque appearance.

In the poem "The Colossus", Sylvia Plath references the Colossus of Rhodes. Perhaps the most famous reference to the Colossus is in the immortal poem, "The New Colossus," by Emma Lazarus in 1883:

Not like the brazen giant of Greek fame,/ With conquering limbs astride from land to land;/ Here at our sea-washed, sunset gates shall stand/ A mighty woman with a torch, whose flame/ Is the imprisoned lightning, and her name Mother of Exiles. From her beacon-hand/ Glows world-wide welcome; her mild eyes command/ The air-bridged harbor that twin cities frame./ "Keep, ancient lands, your storied pomp!" cries she/ With silent lips. "Give me your tired, your poor,/ Your huddled masses yearning to breathe free,/ The wretched refused of your teeming shore./ Send these, the homeless, tempest-tost to me,/ I lift my lamp beside the golden door!"

Those famous last lines are inscribed on a plaque inside the Statue of Liberty in New York City's harbor.

The Colossus has been featured as a wonder of the world in the games Civilization, Rise of Nations, Rome: Total War and many others.

In X-Men, one of the characters is named after the Colossus. 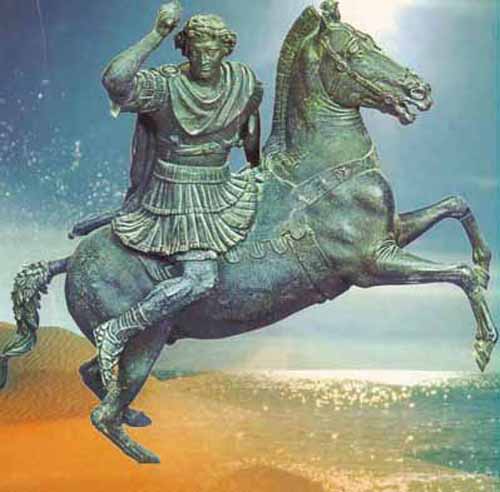