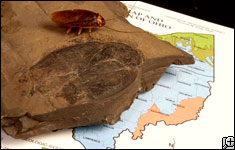 Geologists excavating an old mine in eastern Ohio have found a 300-million-year old cockroach that measures nearly 3.5 inches long, making it the largest complete fossil of a cockroach on record.

The huge roach, Arthropleura pustulatus , is over twice the size of today's cockroaches and beats the previous largest fossil roach on record by nearly a full inch.

News of the discovery will be announced today at the Geological Society of America's annual meeting in Boston.

Aside from its enormous size, other subtle characteristics distinguish the cockroach from its present day descendents. According to Cary Easterday, a master's student in geological sciences at Ohio State University who discovered the fossil, the ancient insect had slightly different legs. The pattern of veins throughout its body also differs from that of modern roaches.

"Nevertheless," Easterday said, "it is more similar than different to today's cockroaches." The insect, which lived 55 million years before dinosaurs roamed the earth, is amongst the oldest known cockroaches on record. Other extinct insects predate the fossil by around 10 million years.

Easterday said that when the cockroach was alive, Ohio had a tropical climate with a mountainous, river-filled environment similar to landscapes found in present day India and Bangladesh. Amphibians were the dominant life form, along with early reptiles and other insects. A 5-foot-long, 1 ¬‡-foot-wide centipede-like creature also was found at the mine site, called 7-11 because it is located at the intersection of Ohio State Routes 7 and 11.

"It (the preserved site) occurred right after a major extinction event that followed a massive drought period," Easterday told Discovery News. "Many trees, plants and creatures disappeared, while new life, such as conifers, began to emerge."

Gary Piper, associate professor of entomology at Washington State University, was not surprised by the fossil find or the cockroach's hardiness.

"Their success is based largely on their biology and habits," explained Piper. "Cockroaches have chewing mouth parts and rather general dietary requirements. They are nocturnal and forage for food and water close to cracks and crevices that they use for harborage. Cockroaches lay eggs in small cases that provide protection from an adverse environment, parasites, predators, and modern day insecticides."

Piper added, "There is no concern about any cockroach species being places on an endangered species list anytime soon!"