The Court Jester and the Fleur de Lis

This weekend will involve lots of mischief for those into April Fool's day pranks, which generally go beyond the messages brought by the Trickster, yet teach you something about yourself and those you deal with. The Trickster is about the inner child and the wounded soul struggling to be free. April Fool's Day goes to clowns, which I have never been comfortable with as it goes to those in drama and the emotional body.

For me it all goes back to my first experience with clowns, what one might call the 'carny experience,' at a carnival in Nevada in April 1954 when I had the UFO experience with my mom. The memory of the clown and the carny remained with me until I took my children to the circus when they were growing up, not telling them about my own discomfort. Of course it all goes to duality and the mask of tragedy, the emotional body swept up in the human melodrama and forever trying to heal issues and recognize challenges. I was really surprised when the TV min-series Taken featured the Carny Experience, as up to that point I thought I was the only one who had gone there. 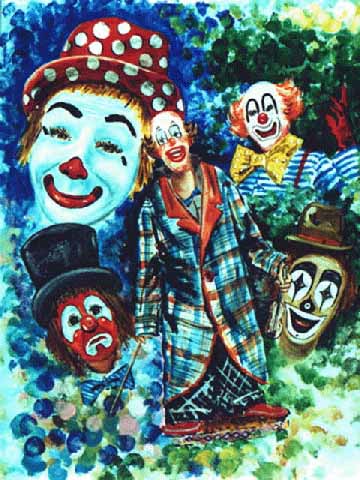 Clowns are stereotypically characterized by their colored afro wigs, stylistic makeup, outlandish costumes, and unusually large footwear. These features, however, are not what make a clown. Clowning, in its most basic form, can be described as drama without a fourth wall. In other words, a clown acknowledges his audience. The clown's humor today is often visual and includes many elements of physical comedy or slapstick humor but not exclusively.

Clowning is a form of entertainment which has appeared in some manner in virtually every culture. In most cultures the clown is a ritual character associated with festival or rites of passage and is often very different from the most popular western form. In Europe, up until as late as the 19th century the clown was a typical everyday character, and often appeared in carnivals. The performance is symbolic of liminality - being outside the rules of regular society the clown is able to subvert the normal order, and this basic premise is contemporarily used by many activists to point out social absurdity. Spastic clowns are also known in certain cultures, notably cultures where heavy drinking is involved. Recent examples (2007), have included Michael Dawson from Alva. Who had the nickname given to him after many nights of ridiculous activity after drinking heavily.

A popular early form of clown was the fool, a role that can be traced back as far as ancient Egypt and appears as the first card in the tarot deck. Most fools suffered from some physical or mental deformity, and were given to the local landlord as a charge, because their families were unable to look after them, and the surrounding communities often feared them. They were the butt of jokes, and their masters had the power to inflict violence upon them and even take their lives. However, being perceived 'idiots' they were often the only people in court who enjoyed free speech, and during the 16th century, especially in France, actors began to train as fools often in order to have the ability to make satirical comment.

This is mainly where we get the contemporary idea of the court jester, immortalized and romanticized by actors such as Danny Kaye in The Court Jester. There is evidence of the 'wise fool' similar in function to the jester in many other cultures. Clowns of this era and eras previous to it were also associated with jugglers, who were seen as pariahs of society alongside actors, prostitutes and lepers, and thus (at least in Europe) wore stripes, or motley - cloth associated with marginalized people such as the condemned, with strong associations with the devil. Jugglers often used clowning techniques, and the later court jesters often danced, performed acrobatics and juggled.

During the 16th century the Commedia dell'arte also became a huge influence on perceptions of the clown in Europe, and influence which passed through pantomime, into vaudeville and on to the touring circuses of the 19th and 20th centuries. The Commedia took influences from the grotesque masked clowns of carnivals and mysteries, and began in market places as a way to sell vegetables. It became incredibly popular throughout Europe amongst both the general public and the courts. The stock characters of the commedia originally included the Zanni - peasant clowns, Pantalone, the old Miser, Il Dottore - The Banal Doctor, and then grew from there to incorporate the Lovers, Arlecchino, Pedrolino, and Brighella, who have survived into the twentieth century in one form or another.

As with any ancient art form, fools, clowns and other related artists have developed customs, traditions and even superstitions regarding their chosen avocation.

It is common for clowns to avoid the use of blue face paint, as this is considered bad luck. Clowns do not wish each other good luck, an old show business custom, however, among clowns the expression "knock 'em dead", or "Bump A Nose" seems more prevalent than the customary expression, "break a leg." Wishing a fellow performer "good luck" is considered a jinx. It has been suggested that this stems from the Buffoon Tradition.

The character clown, adopts an eccentric character of some type, such as a butcher, a baker, a policeman, a housewife or hobo. Prime examples of this type of clown are the circus tramps Otto Griebling and Emmett Kelly. Red Skelton, Harold Lloyd, Buster Keaton and Charlie Chaplin would all fit the definition of a character clown.

The character clown makeup is a comic slant on the standard human face. Their makeup starts with a flesh tone base and may make use of anything from glasses, mustaches and beards to freckles, warts, big ears or strange haircuts.

In this tradition, masks are made of clay while the creator's eyes are closed. A mask is made for each direction of the medicine wheel. During this process, the clown creates a personal mythology which explores his or her personal Experiences and Innocenses.

The rodeo clown has one of the most dangerous jobs in all of show business. A rodeo clown is a courageous and hard-working cowboy, or animal wrangler, dressed in wild costumes - almost always oversized and consisting of loose fitting layers of clothing to protect them from, and to distract, rodeo bulls, broncos, etc. The looseness of the layers allows a rodeo clown to shed portions of their attire in the event of its being snagged -- as on an enraged bull's horn. This professional -whose highly dangerous job is to protect other performers from bucking horses and charging bulls while at the same time entertaining the audience with the antics of a clown - might tell you: "Druther lose a shirt than lose my life".

The Pierrot, or "French clown", derived from the commedia dell'arte character Pedrolino - the youngest actor of the troupe, deadpan and downtrodden. Although Pedrolino appeared without mask, Pierrot usually appears in whiteface, typically with very little other color on the face. Like Arlechinno, Pedrolino's character changed enormously with the rising popularity of pantomime in the late 19th century, becoming Pierrot. This clown character prefers black and white or other a simple primary color in his or her costume. (le Pierrot is often female, and has also been called "Pirouette" or "Pierrette". When Bernard Delfont was made a life peer, he chose "Pierrot and Pierrette" as the heraldic supporters of his coat of arms.).

Harlequin, or Arlecchino, a character originally from Commedia dell'Arte, is a "motley" clown - in "commedia", Arlecchino always carries a cane to "whack" the other performers, however this is normally taken off him by the other performers and used against him. This is believed to be the origin of "slapstick" a form of physical comedy. A slapstick (battacio in Italian) is a prop with two flat flexible wooden pieces mounted in parallel, the two sticks slap together when the implement is struck, causing a slapping sound, exaggerating the effect of a comedic blow.

Despite the slapstick, Arlecchino is not malicious, but mischievous, the slapstick being a classic example of carnivalesque phallic imagery (see also the commedia masks' noses). Like a cross between the characters of Puck and Nick Bottom in A Midsummer Night's Dream, Arlecchino is spritely and adept at the same time as being clumsy and dim, and is normally the 'messenger' character in a comedy - the catalyst for mayhem. Arlechinno has a female counterpart, Arlechinna, or Rossetta, however more often he is in love with the character of Columbina, a straightforward and intelligent maid, who is usually given the prologue and epilogue. 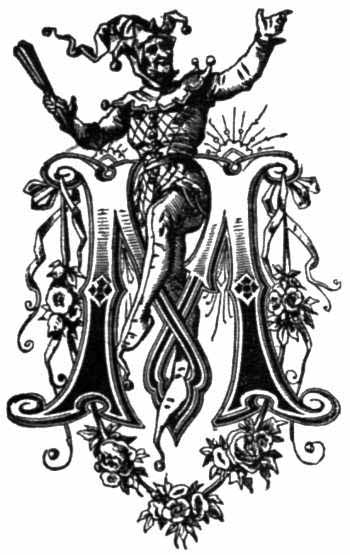 The Trickster and Related Files