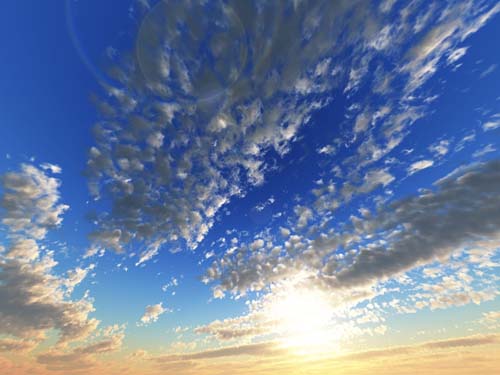 When a hologram closes many things seem surreal as we observe them at this level of conscious awareness. People often tell me that celestial alignments seem off, based on scientific observation. Within planet Earth, they have observed unexplained changes linked to the forces of nature and temporal distortions. It is always best to look for scientific explanations first but many people have come to realize that nothing is as it seems. Does this in any way correlate with ....


The sky is falling ... sort of. Over the last 10 years, the height of clouds has been shrinking, according to new research. The time frame is short, but if future observations show that clouds are truly getting lower, it could have an important effect on global climate change.

Clouds that are lower in the atmosphere would allow Earth to cool more efficiently, potentially offsetting some of the warming caused by greenhouse gases. "We don't know exactly what causes the cloud heights to lower," study researcher Roger Davies of the University of Auckland in New Zealand said in a statement. "But it must be due to a change in the circulation patterns that give rise to cloud formation at high altitude." Clouds are a wildcard in understanding Earth's climate. Ephemeral as they are, they're difficult to track over time, and factors such as height and location make a big difference in whether clouds will slow the effects of global warming or exacerbate them. And no one fully understands how clouds will respond to a warming climate.

For a decade, however, the Multi-angle Imaging Spectro-Radiometer on NASA's Terra spacecraft has been watching Earth's clouds. Now, Davies and his colleagues have analyzed the device's first 10 years of cloud-top height measurements from March 2000 to February 2010. They found that global average cloud height decreased by around 1 percent over the decade, a distance of 100 to 130 feet (30 to 40 meters). Most of the reduction stemmed from fewer clouds forming at very high altitudes. The researchers reported their results in the journal Geophysical Research Letters. The Terra satellite is set to continue collecting data through the rest of this decade, which will help determine whether or not the cloud lowering is a consistent trend.