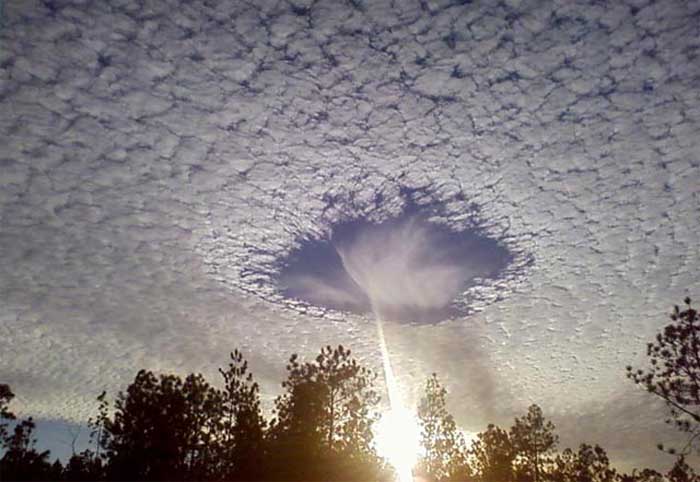 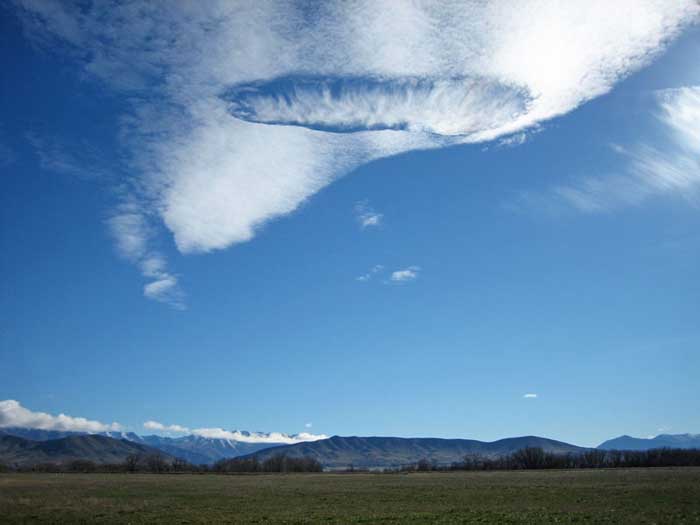 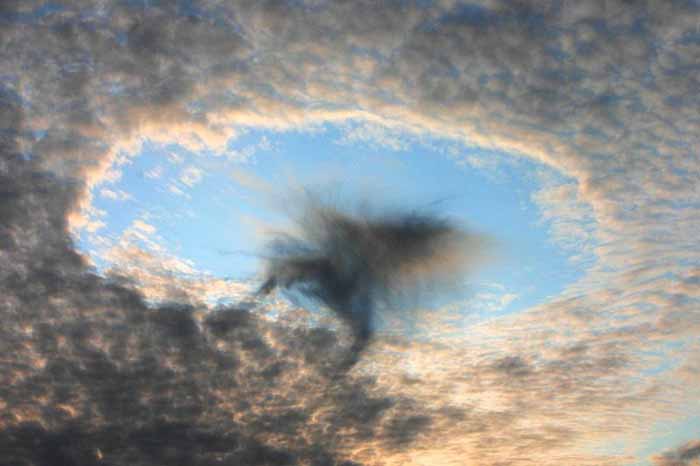 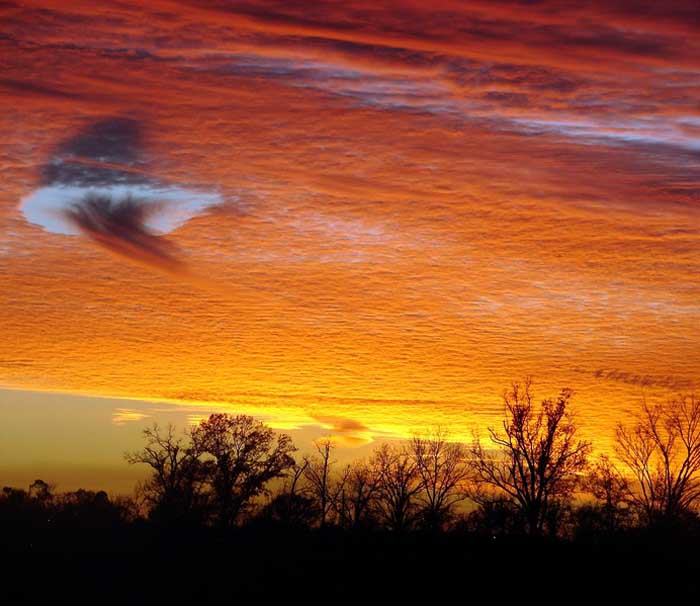 A fallstreak hole (also: hole punch cloud and punch hole cloud) is a large circular gap that can appear in cirrocumulus or altocumulus clouds. Such holes are formed when the water temperature in the clouds is below freezing but the water has not frozen yet due to the lack of ice nucleation particles. When a portion of the water does start to freeze it will set off a domino effect, due to the Bergeron process, causing the water vapor around it to freeze and fall to the earth as well. This leaves a large, often circular, hole in the cloud.

It is believed that a disruption in the stability of the cloud layer, such as that caused by a passing jet, may induce the domino process of evaporation which creates the hole. Such clouds are not unique to one geographic area and have been photographed from the United States to Russia. Because of their rarity and unusual appearance, fallstreak holes are often mistaken for or attributed to unidentified flying objects. 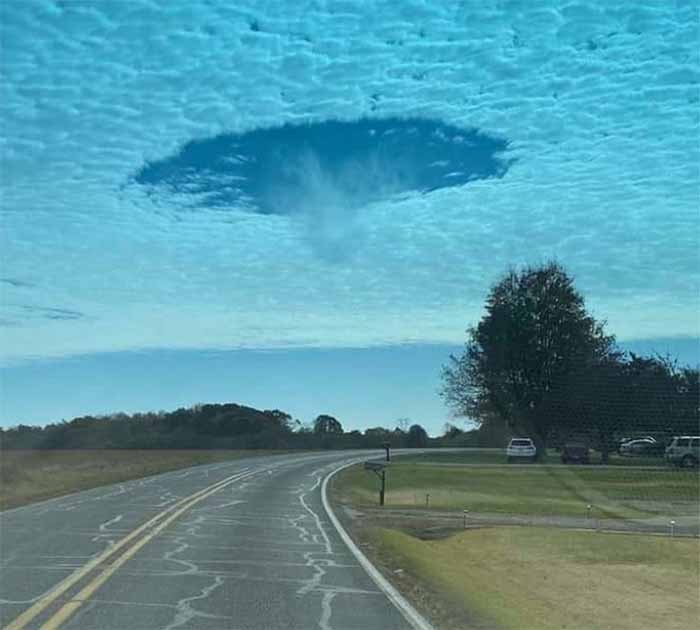 Images showing a mysterious circular gap that appeared in the clouds over a North Carolina highway have ignited a scramble for explanations on social media, including the possibility it was created by a UFO. North Carolina TV station WBTV was the first to post a photo showing what appears to be a near perfect circle in the clouds. 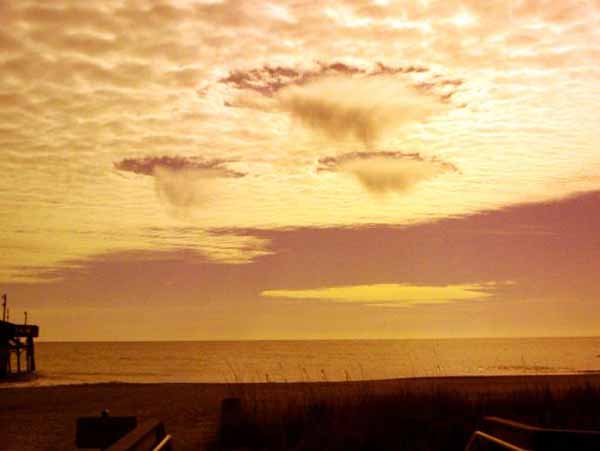 
Triple "hole-punch clouds" appeared close together off South Carolina January 7, 2011. Three nearly identical, UFO-like cloud formations recently appeared over Myrtle Beach, South Carolina, sparking online discussions linking the features to everything from the Second Coming to recent mass bird deaths to secret military experiments. At least one scientist believes the so-called hole-punch clouds have a military explanation, though it may not be quite what conspiracy theorists expect. On January 7, IT technician Wesley Tyler was running out to his car for a computer part when he noticed the saucer-like formations. 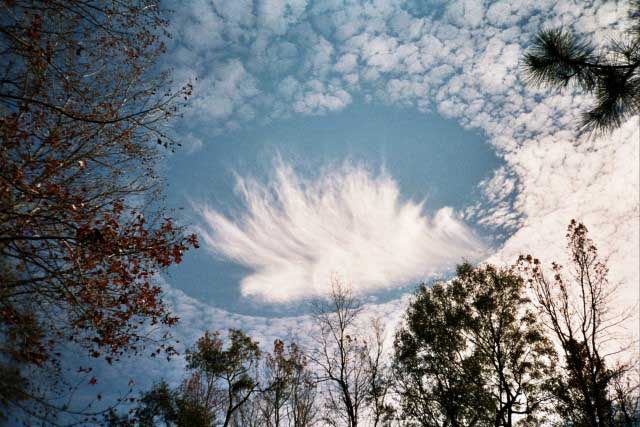 Aircraft can accidentally punch holes in clouds, leaving a trail of snow or rain in their wake, a new study finds. Turboprop and jet aircraft that climb or descend under certain atmospheric conditions can inadvertently trigger what's known as cloud seeding. This technology is usually associated with schemes to control the weather. However, cloud seeding can happen by accident as planes soaring through mid-level clouds leave behind odd-shaped holes or channels in the clouds and cause narrow bands of snow or rain to develop and fall to the ground.

Holes punched in clouds are a phenomenon that has been recognized for many years and seen in photos from around the world. A front-page feature on Yahoo! carried the headline "A Halo over Moscow" after photos emerged of just such a hole in October 2009. The secret behind these mysterious clouds has now been revealed: Supercooled water droplets that remain liquid even at subfreezing temperatures - below about 5 degrees Fahrenheit (minus 15 degrees Celsius). When an airplane cuts through clouds containing the supercooled water droplets, air is cooled behind aircraft propellers or over jet wings, and these water droplets freeze and drop toward Earth.

Hole-punched clouds and accidental cloud seeding may be more common in regions such as the Pacific Northwest and western Europe where cloud layers with supercooled droplets are more common, Heymsfield said.

To unravel the mystery, Heymsfield and his colleagues set to the skies with a battery of instruments in tow. When they flew through some falling snow west of Denver International Airport in 2007, the research team did not notice anything unusual at the time. Once on the ground, a closer analysis of their data revealed a few peculiar anomalies.

Ground-based radar revealed an unusual echo in the area, indicating that the snow had evolved quickly and was unusually shaped. Also, the aircraft's camera recorded a hole in an otherwise solid deck of altocumulus clouds, as well as a burst of snow extending to the ground.

The final piece of the puzzle came when the researchers scrutinized the snowflakes within the snow beneath the hole-punch. These plate-shaped crystals showed evidence of what's known as riming - the accumulation of liquid water - whereas ice particles elsewhere in the cloud showed little or no riming." This tells us that the aircraft literally 'seeded' the cloud just by flying through it," Heymsfield said. "You wouldnšt necessarily see it from satellite or from the ground. I had no idea this was happening. I was sitting in back of the plane. And then this data set just fell in our laps. It was a lucky break," Heymsfield added.

A few years ago scientists were surprised by the sight of two planes carving a hole through a cloud - which then began spewing snow. A new study spawned by the accidental discovery solves the mystery behind so-called hole-punch clouds and explains how airplanes can change the weather, at least on an extremely local level.

Scientists have studied hole-punch clouds since the 1940s and have long suspected that planes play a role in their formation. Now, ice microphysicist Andrew Heymsfield and colleagues have found that aircraft really can create the odd clouds. Their research also uncovered something totally new: that aircraft can unleash precipitation by carving the cloud tunnels, which had never before been observed.

Clouds at a certain the right altitude and temperature - relatively common over western Europe and the U.S. Pacific Northwest, for example - are saturated with water droplets cooled to about 5 degrees Fahrenheit (minus 15 degrees Celsius). Because the water in these clouds is so pure - with no particles around which vapor can condense and freeze - the droplets remain liquid down to minus 35 degrees Fahrenheit (minus 34 degrees C). If the cloud gets much colder, though, they freeze into ice particles that can produce rain or snow.

When a plane's propeller, for example, spins through a cloud, the propeller exerts a rearward force. The force expands air, cooling by as much as 54 degrees Fahrenheit (30 degrees Celsius), said Heymsfield, of the National Center for Atmospheric Research (NCAR) in Boulder, Colorado. Jets do the same thing when air is forced over their wings, though jets cool air by only about 36 degrees Fahrenheit (20 degrees Celsius). As planes push cloud temperatures past the tipping point at which supercooled water freezes, the aircraft "seed" the clouds with ice particles, the study says.

Heymsfield and colleagues flew smack-dab into the hole-punch discovery after having conducting a cloud study from a heavily instrumented turboprop plane near Denver International Airport in 2007. A later look at ground-based radar showed an unexplained band of snowfall in the area. "When we went back to our forward- and downward-looking video camera data, we could see a canal-like hole" in block of clouds. We could look down and see a snow shaft falling out of the hole to the ground."

U.S. Federal Aviation Administration records show that another turboprop followed the same path in short order. The snow squall began five minutes after the second plane had passed. Snow fell for 45 minutes along a band 20 miles (32 kilometers) long and 2.5 miles (4 kilometers) wide, dropping some two inches (five centimeters) on the ground under the band.

Because hole punching triggers dynamic events within the clouds, he added, the new research, published this month in the Bulletin of the American Meteorological Society, could improve our understanding of cloud circulation. The discovery could someday lead to better efforts at producing rainfall by cloud seeding, meaning that, for a change, the weather could be at the mercy of planes, rather than the other way around. 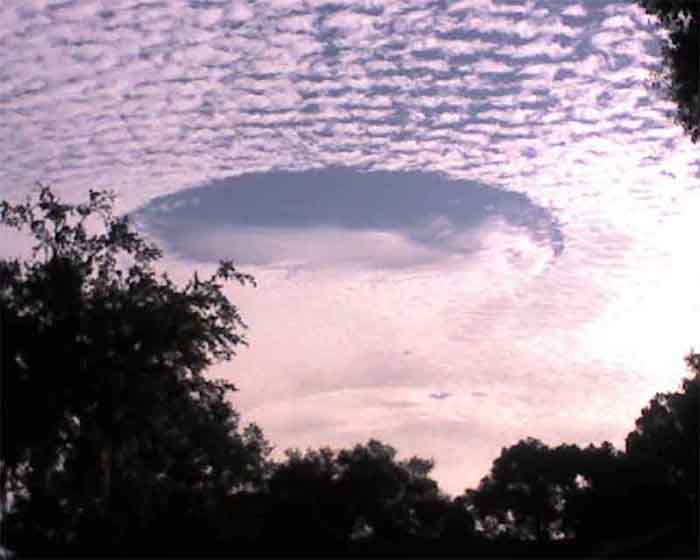 It was an odd, but not oddly shaped, cloud formation and it caught the eye of many in the Bay area Monday morning. ABC Action News viewer Jerry Kessie grabbed his camera and snapped shots of the cumulus ringous and sent them to ABC Action News where we have posted them on our website.

Photo journalist Scott Eason and Captain Al spotted the unidentified hole in the sky saying, "We had just landed the chopper after doing morning traffic. So we got out of the helicopter and looked up and it was just this strange perfect shape in the clouds. So i got out my camera phone and snapped a picture of it." So what is it and should we be worried?

Meteorologist Charlie Paxton at the National Weather Service, in Ruskin says, "No!" He explains they are almost completely natural, "The clouds had a hole in them basically. A jet went through the super cooled water cloud. Turned to ice. And we end up with a hole in the cloud with an ice cloud in the middle."

Plain and simple, the super cooled water that makes up some clouds at about 25-thousand feet, latch on to the dust, or exhaust particles being spit out as a commercial jetliner flies through the cloud. The now droplets then instantly freeze crystal clear. And there you have it. You got the "fixins of a hole where the rain freezes thin".

According to ABC Action News Meteorologist Denis Philips they're commonly referred to as hole punch clouds. "From our perspective it looks like a hole in the middle of a bigger cloud. It happened in Mobile, Alabama a few years back. Lots of pictures on the internet. So it happens. It's not that unusual but then again, we wouldn't be doing a story on it if it happened every day."

At the same time though, don't confuse them with lenticular clouds, usually formed near mountains because of swirling winds, or UFO's, best seen in major motion pictures like Will Smith's "Independence Day", or the flying "cup and sauce" best captured on Photoshop. 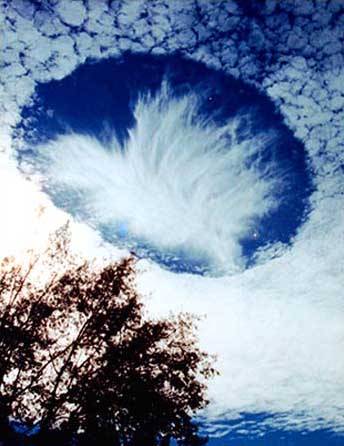 Mobile Alabama - 'Hole in the Sky'

A giant hole that appeared in a uniform layer of cloud over Mobile, Alabama, in the US, has produced some intriguing photos. Local resident Joel Knain said as he took pictures: "I immediately realized that I was seeing something unique."

Meteorological experts believe the hole formed when ice-crystals from a passing plane fell through the cloud, causing the water droplets in it to evaporate. Experts say the process involved is related to that of cloud seeding, which is used to make rain over crop fields.

The unusual phenomenon was observed on December 11, 2003. "I ran inside to get my camera and shot-off 10-12 frames to capture the scene," Joel told BBC News Online. "I would guess that we stood there for 10-15 minutes just staring in amazement."

Strictly speaking there is no scientific term for the apparition, and what exactly it is has been the subject of much meteorological speculation. One hypothesis is that the hole is made by falling ice-crystals that could have come from the exhaust of a passing aircraft. It is possible the air was at just the right temperature and with just the right moisture content so that the falling crystals could absorb water from the air and grow.

The moisture removed from the air could have increased the evaporation of the cloud's water droplets, which then disappeared to produce the dramatic hole. The wispy clouds seen below the hole may be heavier ice-crystals that have fallen from the hole, evaporating (the correct term is subliming) before they reach the ground.