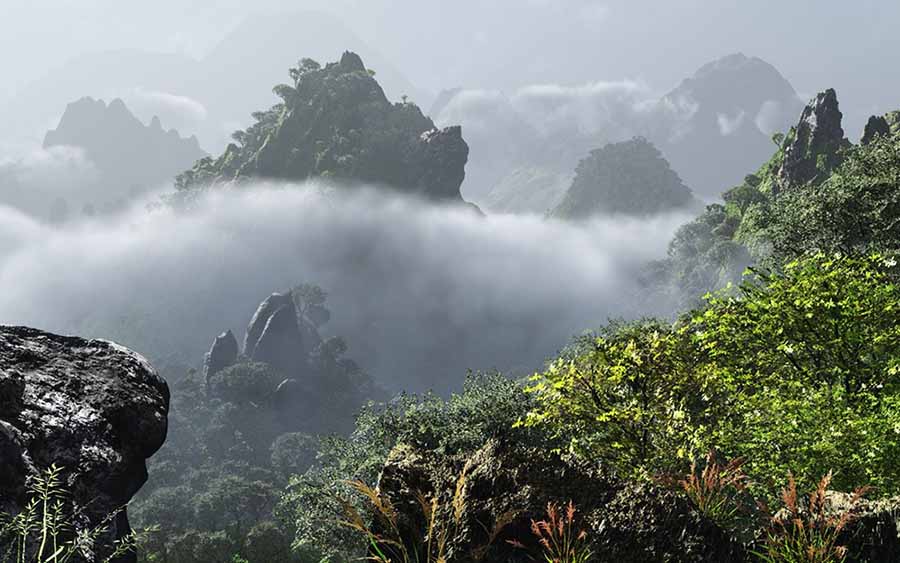 A cloud forest, also called a water forest, is a generally tropical or subtropical, evergreen, montane, moist forest characterized by a persistent, frequent or seasonal low-level cloud cover, usually at the canopy level, formally described in the International Cloud Atlas (2017) as silvagenitus. Cloud forests often exhibit an abundance of mosses covering the ground and vegetation, in which case they are also referred to as mossy forests. Mossy forests usually develop on the saddles of mountains, where moisture introduced by settling clouds is more effectively retained. 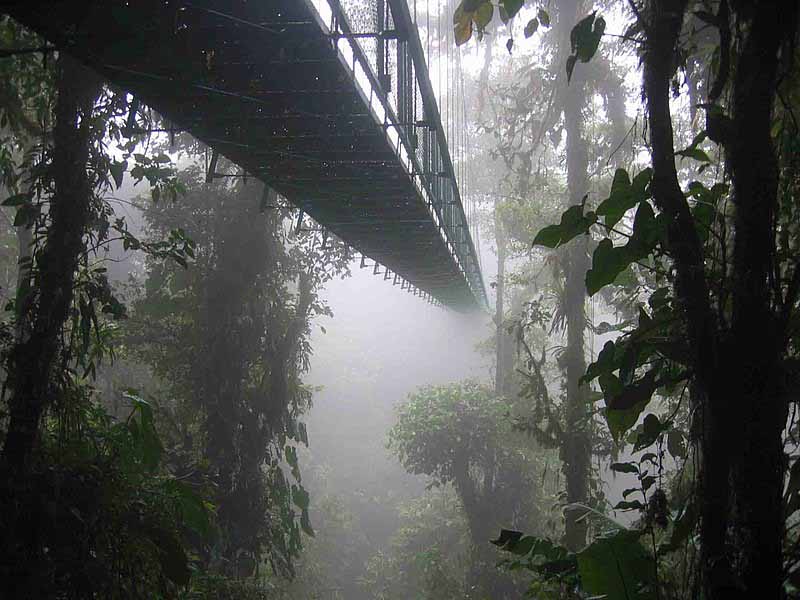 Dependent on local climate, which is affected by the distance to the sea, the exposition and the latitude (from 23°N to 25°S), the altitude varies from 500 m to 4000 m above sea level. Typically, there is a relatively small band of altitude in which the atmospheric environment is suitable for cloud forest development. This is characterized by persistent fog at the vegetation level, resulting in the reduction of direct sunlight and thus of evapotranspiration. Within cloud forests, much of the moisture available to plants arrives in the form of fog drip, where fog condenses on tree leaves and then drips onto the ground below. Annual rainfall can range from 500 to 10,000 mm/year and mean temperature between 8-20°C.

While cloud forest today is the most widely used term, in some regions, these ecosystems or special types of cloud forests are called mossy forest, elfin forest, montane thicket, and dwarf cloud forest.

The definition of cloud forest can be ambiguous, with many countries not using the term (preferring such terms as Afromontane forest and upper montane rain forest, montane laurel forest, or more localized terms such as the Bolivian yungas, and the laurisilva of the Atlantic Islands), and occasionally subtropical and even temperate forests in which similar meteorological conditions occur are considered to be cloud forests. Only 1% of the global woodland consists of cloud forests. Important areas of cloud forest are in Central and South America, East and Central Africa, Indonesia, Malaysia, the Philippines, Papua-New Guinea, and in the Caribbean. 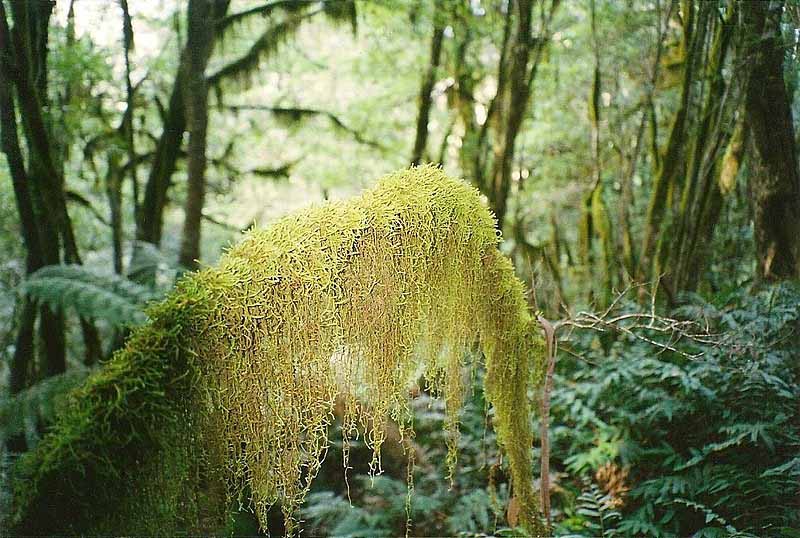 In comparison with lower tropical moist forests, cloud forests show a reduced tree stature combined with increased stem density and generally the lower diversity of woody plants. Trees in these regions are generally shorter and more heavily stemmed than in lower-altitude forests in the same regions, often with gnarled trunks and branches, forming dense, compact crowns. Their leaves become smaller, thicker and harder with increasing altitude. The high moisture promotes the development of a high biomass and biodiversity of epiphyte, particularly bryophytes, lichens, ferns (including filmy ferns), bromeliads and orchids. The number of endemic plants can be very high.

An important feature of cloud forests is the tree crowns can intercept the wind-driven cloud moisture, part of which drips to the ground. This fog drip occurs when water droplets from the fog adhere to the needles or leaves of trees or other objects, coalesce into larger drops and then drop to the ground. It can be an important contribution to the hydrologic cycle.

Due to the high water content of the soil, the reduced solar radiation and the low rates of decomposition and mineralization, the soil acidity is very high, with more humus and peat often forming the upper soil layer.

Areas with a high annual precipitation due to a frequent cloud cover in combination with heavy and sometimes persistent orographic rainfall; such forests have a perceptible canopy strata, a high number of epiphytes, and a thick peat layer which has a high storage capacity for water and controls the runoff; In drier areas with mainly seasonal rainfall, cloud stripping can amount to a large proportion of the moisture available to plants. 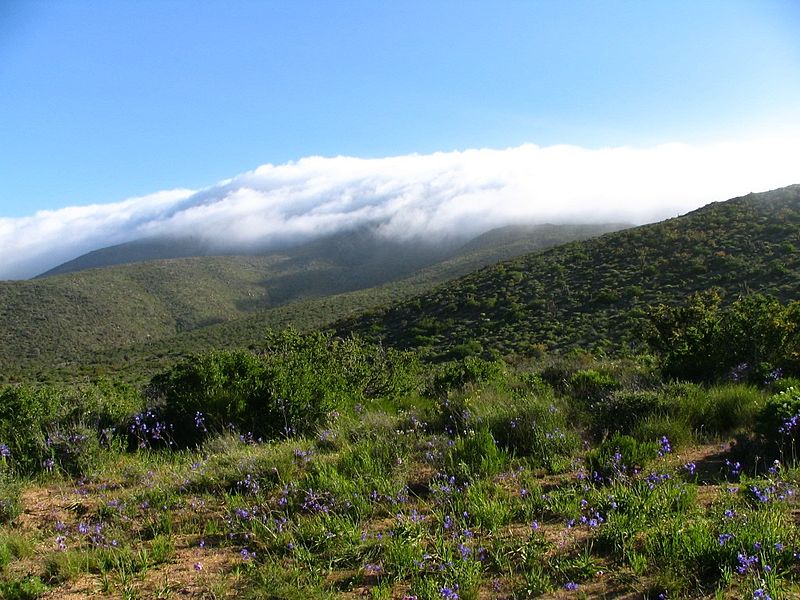 In 1970, the original extent of cloud forests on the Earth was around 50 million hectares. Population growth, poverty and uncontrolled land use have contributed to the loss of cloud forests. The 1990 Global Forest Survey found that 1.1% of tropical mountain and highland forests were lost each year, which was higher than in any other tropical forests. In Colombia, one of the countries with the largest area of cloud forests, only 10Đ20% of the initial cloud forest cover remains. Significant areas have been converted to plantations, or for use in agriculture and pasture. Significant crops in montane forest zones include tea and coffee, and the logging of unique species causes changes to the forest structure. In 2004, an estimated one-third of all cloud forests on the planet were protected at that time.

Because of their delicate dependency on local climates, cloud forests will be strongly affected by global climate change. Results show that the extent of environmentally suitable areas for cloud forest in Mexico will sharply decline in the next 70 years. A number of climate models suggest low-altitude cloudiness will be reduced, which means the optimum climate for many cloud forest habitats will increase in altitude.

Linked to the reduction of cloud moisture immersion and increasing temperature, the hydrological cycle will change, so the system will dry out. This would lead to the wilting and the death of epiphytes, which rely on high humidity. Frogs and lizards are expected to suffer from increased drought. Calculations suggest the loss of cloud forest in Mexico would lead to extinction of up to 37 vertebrates specific to that region.[18] In addition, climate changes can result in a higher number of hurricanes, which may increase damage to tropical montane cloud forests. All in all, the results of climate change will be a loss in biodiversity, altitude shifts in species ranges and community reshuffling, and, in some areas, complete loss of cloud forests.

Cloud-forest conditions are hard and expensive to replicate in a glasshouse because it is necessary to maintain a very high humidity. This is usually expensive as a high temperature must usually be maintained as well, and a high temperature combined with high humidity calls for good air circulation or else fungi and algae will develop. Such displays usually are quite small, but there are some notable exceptions. For many years, the Singapore Botanic Gardens have a so-called coolhouse, whereas the newly opened (2012) Gardens by the Bay feature a very big 0.8 hectares (2.0 acres) coolhouse that is simply named "Cloud Forest". The latter features a 35-metre (115 ft)-high artificial mountain clad in epiphytes such as orchids, ferns, clubmosses, bromeliads and others. Read more