The term clone is used in horticulture to refer to descendants of a single plant which were produced by vegetative reproduction or apomixis. Many horticultural plant cultivars are clones, having been derived from a single individual, multiplied by some process other than sexual reproduction. As an example, some European cultivars of grapes represent clones that have been propagated for over two millennia. Other examples are potato and banana. Grafting can be regarded as cloning, since all the shoots and branches coming from the graft are genetically a clone of a single individual, but this particular kind of cloning has not come under ethical scrutiny and is generally treated as an entirely different kind of operation. 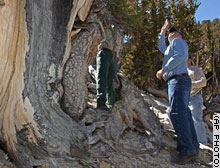 A nonprofit group has snipped some cuttings to clone what is believed to be the world's oldest tree, a bristlecone pine they say has grown for 4,767 years on a wind-swept mountain in eastern California. With the guidance of a U.S. Forest Service ranger, representatives from Michigan-based Champion Tree Project International hiked Tuesday to the tree, at an elevation of 10,400 feet in the White Mountains on the California-Nevada border. The tree was dubbed Methuselah after scientist Edmund Schulman found it and age-dated it by a core sample in the 1950s. Although the name is biblical, the tree is believed to predate Christ by almost 3,000 years. "It's healthy," said David Milarch, co-founder with his son of the tree project. "It's gnarly from almost 5,000 years of harsh weather. But they got plenty of good material."

The specimens to Chris Friel, a doctoral student in plant pathology at UC Davis who is trying to clone the tree. "Within a year, either I'll have an itty bitty little tree or I won't," Friel said. "Frankly, the chances on an ancient tree are extremely slim." David Milarch said the Methuselah tree stands about 55 feet tall, with a misshapen oval-shaped trunk measuring about 41/2 feet wide.

Jared Milarch and Mock also took samples for cloning from a bristlecone pine believed to be the largest of the species and growing in the same forest -- a 60-foot tall tree known as "the Patriarch." Richard Harris, a forestry specialist at the University of California, Berkeley, said it was possible that the Methuselah tree was the oldest in the world. However, he said boring provides only an age estimate, and noted the difficulty of accurately counting 4,767 rings in a core sample from a twisted bristlecone trunk just 41/2 feet across.

The Forest Service backed the Champion Tree Project's efforts to clone prized trees for research and to restock sparse forest areas, Payne said. The nonprofit National Tree Trust also helped the effort. The Milarches began the Champion Tree Project in 1996, and have attempted to clone more than 70 trees nationwide. The organization provided a clone from a 450-year-old champion red ash for planting at a September 11 Pentagon memorial. It also collected bits of poplar trees said to have been planted by George Washington on his estate, Mount Vernon, and expect to return clones for replanting. "We're finding the last genetic links to forests that were here for tens of thousands of years," David Milarch said.