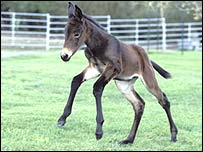 Scientists in the United States have announced the birth of the world's first cloned mule. The foal, called Idaho Gem, is nearly a month old and appears to be perfectly healthy, the researchers say. The first clone of any animal in the horse family.They suggest their work could lead to champion racehorses being routinely cloned in the future. The research is published in the journal Science.

Idaho Gem looks the perfect foal from his pointy ears to his still slightly unsteady legs. His birth sets a number of milestones. Gem is not only the first cloned mule, he is the first clone of any animal in the horse family; and he is the first clone of an animal which cannot normally reproduce. Mules are almost always sterile. They are formed when a male donkey breeds with a female horse; horses have 64 chromosomes, donkeys 62 - mules end up with 63. The success rate from cloning was typically low - from over three hundred embryos, only three viable foals developed; Gem himself plus two brothers which are yet to be born.

The research was sponsored by an American mule-racing enthusiast; but the real implications could lie in horse-breeding. The scientist in charge of Gem's creation, Professor Gordon Woods of the University of Idaho, says the team has solved a technical hurdle which has until now prevented cloning in any member of the horse family. The cloning success rate was 1 in 100

So cloning champion racehorses or show-jumpers should now be possible. "It could also help with endangered species," said Professor Woods, "species like the Przewalski horse." International horse-racing rules currently outlaw any form of assisted reproduction, including cloning; but show-jumping has no such rules. Male show-jumping horses are routinely castrated, so cannot breed - making cloning, perhaps, an attractive option for their owners. Jacky Knightley, a spokeswoman for the British Show-Jumping Association, commented that cloning would take all the fun out of breeding, and could make the sport as boring as Formula One motor racing.