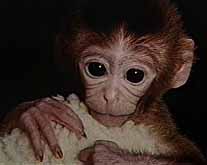 Oregon researchers say they have cloned a monkey by splitting an early-stage embryo and implanting the pieces into mother animals. The technique has so far produced only one living monkey, a bright-eyed rhesus macaque female named Tetra, now 4 months old. Professor Gerald Schatten, a researcher at the Oregon Health Sciences University in Portland who led the research, said four more animals are on the way."This is essentially the method of Brave New World," said Ronald M. Green, an ethicist at Dartmouth College. "This opens the prospect of mass identical replication."

Tetra the monkey is different from Dolly the sheep, which was produced by Scientists at Scotland's Roslin Institute using a process called nuclear transfer -- taking the nucleus out of an adult cell and using it to reprogram an unfertilized egg. Some scientists argue that animals like Dolly are not 100 percent clones because they have genetic material both from the adult cell they were taken from, and from the egg that is hollowed out to make the clone. Tetra was produced by a technique called "embryo splitting." Here's how it works:

In the case of their experiment, three of the embryos didn't survive. The fourth, Tetra, was born 157 days later. Her name means "one of four." Tetra isn't the first monkey to be cloned, but she is the first using the embryo-splitting technique. More are on the way. Schatten said that four mother monkeys are pregnant with cells taken from two separate embryos. Three of the mothers were implanted with two unrelated embryo splits and the fourth mother was impregnated with a single embryo split.

The babies are due in May. "It is possible that we will have genetically identical monkeys born to different mothers," he said. Schatten says the "embryo splitting" process is similar to what happens in nature when a mother has twins. "This is just artificial twinning," he said. The method is commonly used in animals such as cattle but had never before been used to create a monkey. The technique also has been used to create clones of human embryos at least once. In 1993 Dr. Jerry Hall said he had cloned human embryos by splitting them, although he said the clones were destroyed.

Why do scientists need identical monkeys? 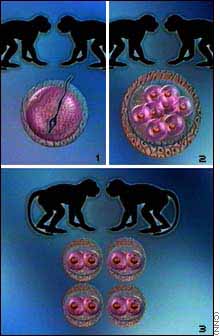 Currently, most medical therapies are first tested in mice, but monkeys are much closer to human biology and would be more reliable in developing daring new techniques such as gene therapy or growing new organs using stem cells, Schatten said. "It is a huge leap from a mouse to a patient," Schatten said. "The monkeys could fill that scientific gap." But Schatten said it's virtually unknown for identical twin rhesus monkeys to be produced naturally. "What we're on the road towards is making identical twins, identical triplets, and the identical quads which could serve as the models for treating the life-threatening diseases that still plague us today," he said.

"This is very exciting and very important," said Dr. John Strandberg with the National Institutes of Health. "I can't think of a single kind of monkey-based research that wouldn't benefit from using identical animals."Strandberg said identical animals are so valuable that researchers often inbreed mice or rats to obtain nearly the same effect.

Cloned monkeys also would also facilitate an important of test the old argument of whether nature or nurture plays a bigger role in development of offspring. "We could learn what the environmental effect is, separate from genetics," Schatten said. "There are theories that maternal environment can result in an IQ drop of around 10 points. "There are theories that influences in pregnancy have consequences very late in life, he said. For example, the children and even grandchildren of malnourished women may be prone to heart disease and diabetes."By taking say a set of triplets and putting them into three different moms ... you could have one mom listen to Mozart, another heavy metal and maybe NPR (U.S. National Public Radio) for a third. And maybe you could have the very same baby born in the very same mom but in a sequential pregnancy."