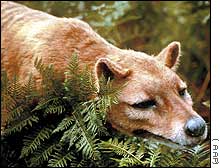 Conjuring images of Jurassic Park, Australian scientists say they are on the way to reviving a previously extinct species -- the Tasmanian Tiger -- using cloning technology. The last Tasmanian Tiger, or Thylacine, died in captivity around 65 years ago. The dog-like creature was a carnivorous, pouched marsupial with distinctive stripes on its back and hindquarters, which lived in the wilderness of Australia's Tasmania state. Geneticists working for the Australian Museum said Tuesday they had successfully replicated Thylacine DNA using a process called polymerase chain reaction (PCR).

This breakthrough allows the scientists to produce millions of pure copies of undamaged DNA fragments which they believe can work in a living cell. Director of the Australian Museum Professor Mike Archer told CNN that the PCR process only worked if DNA being used was viable. "This technique was an extremely critical step in producing sufficient amounts of Tasmanian Tiger DNA to proceed with the research and extremely good news for future steps in accomplishing this project," he said. The next stage is to make large quantity copies of all the genes of the Tasmanian Tiger so these can be used to construct synthetic chromosomes. Archer said there was now not a "massive technical barrier" to producing Tasmanian Tiger clones, "only a hell of a lot of hard work. The big challenge now is the creation of the genetic library."

Archer said some scientists believed the first cloned tiger pup could be born within a decade, but timing was difficult to predict because of the unknowns ahead in such a project. No other long extinct species has ever been cloned, although unsuccessful attempts have been made to extract DNA from a frozen mammoth. The museum is currently working on viable DNA from three Thylacines -- two females and a male -- and hopes to get access to more DNA to enable it to develop sufficient genetic variation.

He said Australia was "out in front of the rest of the world" with this work, but far greater resources were now needed to complete the project. "We are looking for some significant players to help," he said, adding that the project was attracting considerable international interest. Archer said if the cloning of the Tasmanian tiger was successful, it could spark attempts to revive other extinct species. While stories abound that some Thylacines continue to live in the remote wilds of Tasmania, there has been no verified sightings nor reliable evidence to support this.