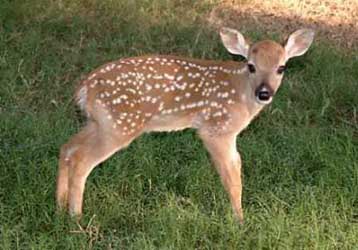 Scientists at Texas A&M University have produced what they believe is the first cloned deer, the school says. Tests have confirmed that a fawn named Dewey born to a surrogate mother in May was a genetic duplicate of a male white-tailed deer from southern Texas whose skin samples were used in the cloning process, the school said.

Photos posted on the Texas A&M Internet site Monday showed the little gray deer standing in a patch of grass. "Dewey is developing normally for a fawn his age and appears healthy," said Dr. Mark Westhusin, who was lead investigator on the project. Even though white-tailed deer are abundant in the wild, Westhusin said in a statement the creation of Dewey could prove helpful in preserving endangered species such as the Key West deer of Florida. Texas A&M, located in College Station, Texas 90 miles northwest of Houston, said it was the first academic institution to have cloned five different species. Its scientists have also cloned cattle, goats, pigs and a cat, the school said.