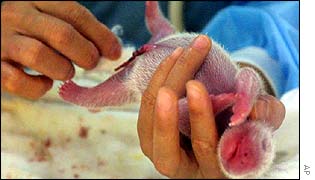 China has cleared two major hurdles in its quest to clone the highly endangered giant panda and just one problem remains to be surmounted, the scientist leading the project says. Chen Dayuan said researchers had worked out how to create a panda embryo using an egg cell from another species and implant the embryo in the uterus of a surrogate mother, also of a different species.


Panda clone could save species   BBC - June 22, 1999
Chinese scientists say they have successfully produced an embryo clone of a giant panda, and are hoping that it will now develop to maturity. They are hailing it as a possible breakthrough in their efforts to save one of the world's most endangered species. Only about 1,000 pandas live in the wild, with another 100 in zoos. They are notoriously reluctant to reproduce, and experts have warned that the animal could be extinct within 25 years. The state-run Xinhua news agency said researchers from the Chinese Academy of Sciences introduced genetic material from a dead female panda into the egg cells of a white rabbit. The resulting embryo was nurtured over 10 months and scientists are now trying to implant it in a host animal's uterus.