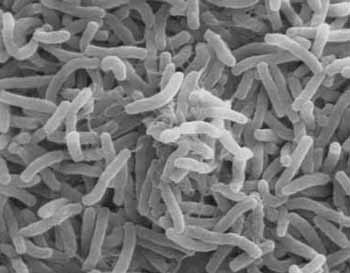 Cholera is an infection in the small intestine caused by the bacterium Vibrio cholerae. The main symptoms are profuse, watery diarrhea and vomiting. Transmission occurs primarily by drinking water or eating food that has been contaminated by the feces of an infected person, including one with no apparent symptoms.

The severity of the diarrhea and vomiting can lead to rapid dehydration and electrolyte imbalance, and death in some cases. The primary treatment is oral rehydration therapy, typically with oral rehydration solution (ORS), to replace water and electrolytes. If this is not tolerated or does not provide improvement fast enough, intravenous fluids can also be used.

Antibacterial drugs are beneficial in those with severe disease to shorten its duration and severity. Worldwide, it affects 3Đ5 million people and causes 100,000Đ130,000 deaths a year as of 2010.

Cholera was one of the earliest infections to be studied by epidemiological methods.

Although cholera may be life-threatening, prevention of the disease is normally straightforward if proper sanitation practices are followed. In developed countries, due to nearly universal advanced water treatment and sanitation practices, cholera is no longer a major health threat. The last major outbreak of cholera in the United States occurred in 1910Đ1911 Effective sanitation practices, if instituted and adhered to in time, are usually sufficient to stop an epidemic.