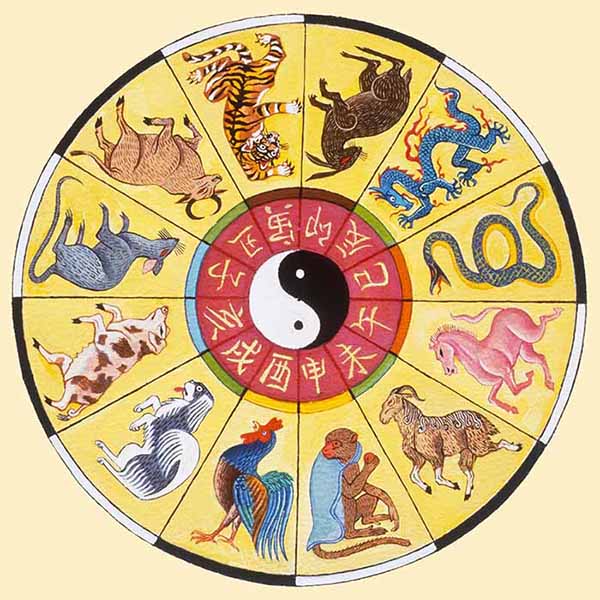 Chinese astrology is based on the traditional astronomy and calendars. Chinese astrology came to flourish during the Han Dynasty (2nd century BC to 2nd century AD). Chinese astrology has a close relation with Chinese philosophy (theory of the three harmonies: heaven, earth, and water), and uses the principles of yin and yang and concepts that are not found in Western astrology, such as the wuxing (five phases), the ten Heavenly Stems, the twelve Earthly Branches, the lunisolar calendar (moon calendar and sun calendar), and the time calculation after year, month, day, and shichen (double hour).

Chinese astrology is based on the astronomy and traditional calendars. The Chinese astrology does not calculate the positions of the sun, moon and planets at the time of birth. Therefore, there is no astrology in the European sense in China.

Chinese astrology has a close relation with Chinese philosophy (theory of the harmony of sky, humans and earth) and different "principles" to Western: the wu xing teachings, yin and yang, astronomy: five planet, the 10 Celestial stems, the 12 Earthly Branches, the lunisolare calendar (moon calendar and sun calendar), the time calculation after year, month, day and shiche

Chinese astrology is the divination of the future from the Chinese calendar, which is based on astronomy, and ancient Chinese philosophy. In particular, it is based on the sexagenary cycle of 60 years that has been documented since the time of the Shang Dynasty at the latest. This basic cycle has been constructed from two cycles: the 10 heavenly stems (the five elements in their yin and yang forms) and the 12 earthly branches, or the 12-year cycle of animals referred to as the Chinese zodiac. The Chinese animal zodiac also operates on a cycle of months or 'moons' and of hours of the day.

The Chinese zodiac refers to a pure calendrical cycle; there are no equivalent constellations like those of the occidental zodiac. In imperial times there were astrologers who watched the sky for heavenly omens that would predict the future of the state, but this was a quite different practice of divination from the popular present-day methods.

The ancient Chinese astronomers called the 5 major planets by the names of the element they were associated with: Venus corresponds to Metal (gold); Jupiter to Wood; Mercury to Water; Mars to Fire; Saturn to Earth. According to Chinese Astrology, a person's destiny can be determined by the position of the major planets, along with the positions of the Sun, Moon and comets and the person's time of birth and Zodiac Sign. The system of the twelve year cycle of animal signs was built from observations of the orbit of Jupiter. Chinese astronomers divided the celestial circle into 12 sections to follow the orbit of Jupiter, the Year Star). Astronomers rounded the orbit of Suixing to 12 years (from 11.86). Suixing was associated with Sheti (Bootes) and sometimes called Sheti.

Another popular legend has it that a race was used to decide the animals to report to the Jade Emperor:

All the animals lined up on the bank of a river and were given the task of getting to the opposite shore. Their order in the calendar would be set by the order in which the animals managed to reach the other side. The cat wondered how he would get across if he was afraid of water. At the same time, the ox wondered how he would cross with his poor eyesight. The calculating rat suggested that he and the cat jump onto the ox's back and guide him across. The ox was steady and hard-working so that he did not notice a commotion on his back. In the meanwhile, the rat snuck up behind the unsuspecting cat and shoved him into the water. Just as the ox came ashore, the rat jumped off and finished the race first. The lazy pig came to the far shore in twelfth place. And so the rat got the first year named after him, the ox got the second year, and the pig ended up as the last year in the cycle. The cat finished too late (thirteenth) to win any place in the calendar, and vowed to be the enemy of the rat forevermore.

Some versions of the tale say that the cattle nominated a water buffalo to represent them because he was more proficient at water. The trade was acceptable because both animals are members of the family of bovines.

Another expands the race; the route ran through a forest, over ranges of plains and grasslands, and along a stream, before finally crossing a lake to the destination town.

Yet another variation tells of two different races. The first involved all the animals, in two divisions to avoid the fast animals dominating the top, and the top six in each division would "make the cut" for a second round, which would then determine the order of placement of the animals in the zodiac. This format is rather like the one that the National Football League uses to determine its playoff teams (six from each conference).

There is also a cycle of the Five Elements (Wood, Fire, Earth, Metal (Gold), Water) on top of the cycle of animals. A person's year sign can be a gold dragon, a wood rooster etc. In ancient match-making practice in China, couples were brought together according to their compatible signs. For example, it is believed that dog and dog don't get along, but dog and pig do; a water dog supports a wood pig but dominates a fire pig in their relationship because water benefits wood, but controls fire according to the Chinese five elements' interaction. In Japan, completion of an entire sixty year cycle of twelve animals and five elements is celebrated in a special birthday for sixty-year olds called kanreki.

The elements are also associated with colors, the traditional correspondence being green to Wood, red to Fire, brown to Earth, white to Metal, and black to Water. Some websites denote the years by the color and zodiac sign (as opposed to animal sign and element). (Notice the title "Green (Wooden) Chicken Year".)

The elements are combined with the binary Yin Yang cycle, which enlarges the element cyle to a cycle of ten. Even years are yang, odd years are yin. Since the zodiac animal cycle of 12 is divisible by two, every zodiac can only occur in either yin or yang: the dragon is always yang, the snake is always yin, etc. This combination creates a 60-year cycle, starting with Wood Rat and ending with Water Pig. The current cycle began in the year 1984.

Since the (traditional) Chinese zodiac follows the (lunisolar) Chinese calendar, the switch over date for the zodiac signs is the Chinese New Year, not January 1 as in the Gregorian calendar. Therefore, a person that was born in January or early February may have the sign of the previous year. For example, 1990 was the year of the horse, but anyone born from January 1 to January 25, 1990 was born in the year of the snake (the sign of the previous year), because the 1990 year of the horse began on January 26, 1990.

There are some newer astrological texts which follow the Chinese Agricultural Calendar (the jie qi), and thus place the change over of zodiac signs at the solar term li chun (beginning of Spring), at solar longitude 315 degrees.

The Chinese zodiac signs are used by cultures other than Chinese also. For one example, they usually appear on Japanese New Year's cards. The United States Postal Service and those of several other countries issue a postage stamp each year to honor this Chinese heritage. However, those unfamiliar with the use of the Chinese lunar calendar usually just assume that the signs switch over on January 1 of each year. Read more


More than 3,000 years ago, Chinese people invented the 10 Heavenly Stems and 12 Earthly Branches for chronological purposes. These signs are used to designate the hours, days, months and years. However, since most people at that time were illiterate, the signs were difficult to use. Later, to make things easier to memorize, people used animals to symbolize the 12 Earthly Branches. The animals in order are the mouse, ox, tiger, rabbit, dragon, snake, horse, sheep, monkey, rooster, dog and pig.

Many Chinese people strongly believe that the time of a person's birth is the primary factor in determining that person's personality. Many fortune-tellers, when telling your fortune, say what they need to know is your exact time of birth. Then, whether you are successful in your life and career, or whether you will be happy is clear to the fortune-tellers.

According to one legend, during a Chinese New Year celebration, Buddha invited all the animals to his kingdom, but unfortunately, for reasons only known to the animals, a total of 12 turned up. The mouse was naturally the first, followed by the ox, then the tiger, the rabbit and so on and finally the pig.

Out of gratitude, Buddha decided to name the year after each of the animals in their order of arrival, and people born of that year would inherit the personality traits of that particular animal. These animals are also supposed to have some influence over the period of time they were named after.

It is essential in China that every person knows which animal sign he is born under. That is because it has been implicitly agreed upon that no important steps of life should be taken without consulting first the Chinese Zodiac. Some Chinese consider this superstition, but many truly believe that the signs reveal the hidden secrets of a person's character.

By the 5th century, the Chinese had cataloged 1464 stars.

In Beijing, there were about 5,000 stargazers.

Ancient astrologers could correctly predict when tides, seasons, and other things, just by looking at the stars and planets. One of the uses for astrology was for farming - the proper time to plant and harvest crops.

A lot of the Chinese looked to the stars, but some were drawn to the Earth, trying to solve riddles and mysteries of math. They did not know that everything was made from hundreds and millions of atoms, but instead they thought everything was made up of the five elements: fire, earth, metal, water and wood. They looked at how these elements could change, and explained how nature worked in those terms. Wood goes through a basic change to become fire (flames), fire turns into the earth (ashes), earth makes the metal (iron and other metals) mined from the earth. Metal brings water (metal collects dew if outside over night). And to make the circle, water produces wood (wood plants need water to grow). The scientists did not think of the five elements as DNA, but more like changing things in nature; and that is how the Chinese viewed life and nature.

The roots of this interpretive art, are based deeply in the classical philosophy of Confucius, Lao-tse and the Yi Jing (I Ching). According to Chinese legend, the order of the twelve signs was determined by Buddha, upon celebration of the Chinese New Year (which falls on different dates, from mid-January to mid-February.) The Buddha invited all of the animals in the kingdom together for a meeting, but only 12 creatures attended.