A seal, in an East and Southeast Asian context, is a general name for printing stamps and impressions thereof which are used in lieu of signatures in personal documents, office paperwork, contracts, art, or any item requiring acknowledgement or authorship. On documents they were usually used to print an impression using a pigmented paste or ink, unlike the wax impression commonly used in Europe. The process started in China and soon spread across East Asia. China, Japan and Korea currently use a mixture of seals and hand signatures, and, increasingly, electronic signatures.

Chinese seals are typically made of stone, sometimes of metals, wood, bamboo, plastic, or ivory, and are typically used with red ink or cinnabar paste specifically refers to the imprint created by the seal, as well as appearing in combination with other morphemes in words related to any printing, as in the word "printing".

The role of seals in the Chinese culture can hardly be underestimated. For the last 3,000 years they have been used in both official and private spheres. The earliest examples of seals come from the Shang dynasty (BCE 16-11 c.) from the archeological sites at Anyang. However very little is known about their usage at this early stage, it is only starting from the Spring and Autumn period (BCE 722-481) that we begin to see an increased quantity of seals paired with textual references to them. 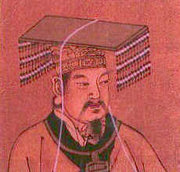 According to a Han dynasty story, the first seal was given to the Yellow Emperor by a yellow dragon with a chart on its back. Another story says that it was given to Emperor Yao by a phoenix as the emperor was sitting in a boat. In any case, the receipt of the seal signifies the conferral of the Mandate of Heaven. He who has the seal possesses the Mandate of Heaven, in other words, he has been given the right to rule the empire. So when Tang, the first ruler of the Shang dynasty overthrows the last tyrant of the previous Xia dynasty, he seizes the royal seal and thus establishes his power.

with inscription in Chinese (left) and Manchu (right)

Until the end of Warring States period (BCE 403-221), there was only one way of calling seals, both official and private, regardless of their use and material. This name was xi which in the following periods gradually became the designation for imperial seals.

According to the History of Tang dynasty, Empress Wu (634-705) issued an order to change the word xi which was up until then used for imperial seals, to bao (treasure). Apparently, she disliked the fact that the word xi was close in sound to the si (death). But when Emperor Zhongzong resumed the throne in 705, he changed the name for imperial seals back to xi. In subsequent centuries the two words were alternated, depending on the period.

At the time of the Han dynasty, the emperor had six seals, during the Tang he had eight, during the Ming over a dozen, and by the time of the Qing, there were several dozens of official imperial seals. The inscription on these official seals usually refers to receiving the Mandate of Heaven or being the successor of Heaven.

Another type of imperial seal was a seal that the emperor used to indicate that a certain document was written in his own handwriting. Emperor Qianlong (1736-1795) for example, was famous for his literary ambitions, including calligraphy, and had produced a large amount of texts affixed with his seal. When his calligraphy was carved into stone steles, the seal was copied onto the surface of the stone too.

Yet another seal was used by the emperors to appraise and appreciate art. It was customary for collectors and connoisseurs of art to affix their seals on the surface of a scroll of painting or calligraphy. The paintings acquired by the imperial household were affixed by the imperial seal. Many famous paintings from the Forbidden City have seals of generations of subsequent emperors on them.

Official seals have been conferred to officials as a token of their office and authority. These seals were usually small enough to be carried on the official's belt. There were regulations as to the material and shape of the handle of these seals: some had to be golden, some copper, some with a handle in the shape of a turtle, some of a camel.

Up to the Eastern Han dynasty (25-330), the color of ink used to affix official seals was regulated depending on the position of the owner, some officials had to use green ink, some purple, some yellow etc.

The calligraphy of the inscription had changed a great deal over the long span of Chinese history. Approaching the Han dynasty, the characters on the seal inscriptions tend to become thicker and more angular. From the Sui dynasty (581-618), they become rounded and thinner, and during the Song and Yuan periods we can witness the spectacular jiudie (nine-folded) script. In the Qing period, most official seals are bilingual with the Chinese inscription on the right side and the Manchu on the left. 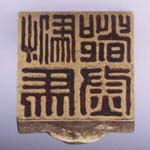 Private seals are naturally unregulated; therefore they show the largest variety in content, shape, size, material and calligraphy. Despite their varied characteristics, they can still be categorized based on their use.

Seals with names, pen names, pseudonyms etc on them were used as a signature by people in their private life. This is how artists sign their works and letters. Chinese literati commonly used a number of different pen names so identifying a person's name from a seal can be a tricky business.

Collector seals were mainly used for the purpose of authenticating pieces of art. Thus a seal of a famous collector or connoisseur would become an integral part of a work of art and could substantially raise its value. Thus in the course of several centuries, some Chinese paintings became covered by a dozen of different seals.

The rest of private seals can be conveniently categorized under the umbrella term "leisure seals". The inscription on these seals is usually a short text which is either a quote from a famous writing or just some saying that the owner thought important. Typical inscriptions are "Respect fate", "Attain wisdom", "Respect", "Use loyalty and humanity in your affairs" etc. One could compare these seals to signatures with a quote at the end of email messages where the people append some saying they consider valuable at the end of their message. Read more