Astronomy in China has a very long history, with historians indicating that the Chinese were the most persistent and accurate observers of celestial phenomena anywhere in the world before the Arabs. Star names later categorized in the twenty-eight mansions have been found on oracle bones unearthed at Anyang, dating back to the middle Shang Dynasty (Chinese Bronze Age), and the mansion system's nucleus seems to have taken shape by the time of the ruler Wu Ding (1339-1281 BC).

Detailed records of astronomical observations began during the Warring States period (fourth century BC) and flourished from the Han period onward. Chinese astronomy was equatorial, centered as it was on close observation of circumpolar stars, and was based on different principles from those prevailing in traditional Western astronomy, where heliacal risings and settings of zodiac constellations formed the basic ecliptic framework.

Some elements of Indian astronomy reached China with the expansion of Buddhism after the Eastern Han Dynasty (25-220 AD), but the most detailed incorporation of Indian astronomical thought occurred during the Tang Dynasty (618-907), when numerous Indian astronomers took up residence in the Chinese capital, and Chinese scholars, such as the great Tantric Buddhist monk and mathematician Yi Xing, mastered its system. Islamic astronomers collaborated closely with their Chinese colleagues during the Yuan Dynasty, and, after a period of relative decline during the Ming Dynasty, astronomy was revitalized under the stimulus of Western cosmology and technology after the Jesuits established their missions. The telescope was introduced in the seventeenth century. In 1669, the Peking observatory was completely redesigned and refitted under the direction of Ferdinand Verbiest. Today, China continues to be active in astronomy, with many observatories and its own space program. Chinese Astronomy  Wikipedia


The ancient Chinese invented the first planetarium, which was actually made by an emperor. The planetarium was a big enclosed place with stars and constellations on the inside. The person using the planetarium would sit in a chair that was hanging from the top of the enclosed dome.

A solar eclipse of 16 June 763 BC mentioned in an Assyrian text is important for the Chronology of the Ancient Orient.

Ancient Chinese astronomy was primarily a government activity. It was the astronomer's role to keep track of the solar, lunar, and planetary motions as well as divine what astronomical phenomena may mean for the ruling emperor. Solar eclipses, infrequent and dramatic, were important enough to be recorded in chronicles and on "oracle" bones. Below are a few translated eclipse records found in the documents of ancient China from various dynasties. In general, the translations give the Roman calendar dating of the event, the Chinese dating, and the observation. Following in parentheses is the record in which the observation is noted. More translated records can be found in the references given below. Unless otherwise noted, the translations below can be found in the book Historical Eclipses and Earth's Rotation by F. Richard Stephenson.

"Oracle" bones are pieces of animal bones and tortoise shells inscribed with astronomical observations, that were probably used for divinations. Oracle bones hail from the Shang dynasty (c. 1600 - 1050 BC) and make many references to solar eclipses. The eclipse records are often incomplete, however, and the dating of the bones is not reliable.

Eclipse observations from the Chou dynasty and Warring States period (c. 1050-221 BC), and onward, have been reliably dated, and it appears that some astronomers recognized eclipses as naturally occurring phenomena. From the Chou dynasty, 36 solar eclipse observations are recorded in the Ch'un-ch'iu beginning around 720 BC. The Piao and the Shih-chi documents refer to nine solar eclipses from the Warring States period.

During the Ming dynasty (1368-1644 AD), total solar eclipse observations are found in the histories of Ming provinces after 1500 AD. Prior to 1500 AD, eclipse records can be found in the Imperial Annals. These observations, however, are not of total solar eclipses. Aug 20, 1514 AD: "At the hour of wu suddenly the Sun was eclipsed; it was total. Stars were seen and it was dark. Objects could not be discerned at arm's length. The domestic animals were alarmed and people were terrified. After one (double-)hour it became light." (local history of Tung-hsiang county, Chiang-his province) 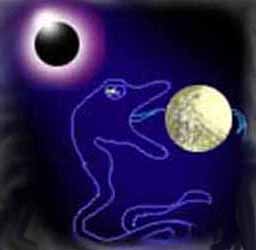 To the ancient Chinese, solar eclipses meant
that dragons were devouring the sun.