The Chachapoyas Culture of Peru 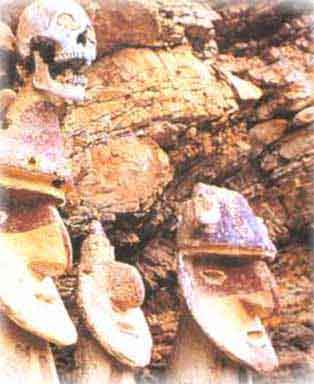 The Chachapoyas are a lost civilization in the upper Amazon of Peru. Discovered in a remote and rugged area of the Amazonian Andes in 1843, seventy years before Machu Picchu was brought to public attention, the colossal ruin known as KuŽlap was built by members of a regional culture or group of cultures known as the Chachapoya.

The Chachapoyas, also called the Warriors of the Clouds, were an Andean people living in the cloud forests of the Amazonas region of present-day Peru. The Incas conquered their civilization shortly before the arrival of the Spanish in Peru. When the Spanish arrived in Peru in the 16th century, the Chachapoyas were one of the many nations ruled by the Inca Empire. Their incorporation into the Inca Empire had not been easy, due to their constant resistance to the Inca troops.

Since the Incas and the Spanish conquistadors were the principal sources of information on the Chachapoyas, unbiased first-hand knowledge of the Chachapoyas remains scarce. Writings by the major chroniclers of the time, such as El Inca Garcilaso de la Vega, were based on fragmentary second-hand accounts. Much of what we do know about the Chachapoyas culture is based on archaeological evidence from ruins, pottery, tombs and other artifacts.

Origin of the Chachapoyas -- Ever since early chroniclers reported the Chachapoyas to be a tall, fair-skinned race, there has been much popular speculation about their origins. Additionally, some claim that mummified remains of Chachapoyans resemble a Caucasoid-like physical type. A recent media report claimed that: "The Chachapoyas were a tall, fair-haired, light-skinned race that some researchers believe may have come from Europe." This contradicts standard theories of migration to the New World. If not an autapomorphy, (or an artifact of preservation conditions; see also the debate about the Tarim mummies), the Chachapoyas were a unique population. Accounts such as that of Cieza de Le—n only indicate that they did have lighter skin than other Native Americans of the region, and as with other anomalous populations (such as the Guanche people of the Canary Islands), their origins and appearance are subject to speculation and exaggeration.

According to the analysis of the Chachapoyas objects made by the Antisuyo expeditions of the Amazon Archaeology Institute, the Chachapoyas do not exhibit Amazon cultural tradition; rather their cultural goods have Andean roots. Given that the terrain faciliates peripatric speciation - as evidenced by the high biodiversity of the Andean region - the physical attributes of the Chachapoyas are most likely reflecting founder effects, assortative mating, or related phenomena in an initially small population sharing a relatively recent common ancestor with other Amerind groups.

The anthropomorphous sarcophagi resemble imitations of funeral bundles provided with wooden masks typical of the Horizonte Medio, a dominant culture on the coast and highlands, also known as the Tiahuanaco-Huari or Wari culture. The "mausoleums" may be modified forms of the chullpa or pucullo, elements of funeral architecture common throughout Peru and in Tiahuanaco-Huari.

The reason for an Andean people to inhabit the Amazonian Andes in particular seems to be the need to expand agrarian borders. The agricultural environments of both the Andes and the coastal region, characterized by its extensive desert areas and limited soil suitable for farming, became insufficient for sustaining a population like the ancestral Peruvians, which had grown for 3000 years.

During the sovereign Huayna Capac's government, the Chachapoyas rebelled: They had killed the Inca's governors and captains (...) and (...) soldiers (...) and many others were imprisoned, they had the intention to make them their slaves. As an answer, Huayna Capac, who was in the Ecuadorian ca–aris land and while he was gathering his troops, sent messengers to negotiate peace. But again, the Chachapoyas "punished the messengers (...) and threatened them with death".

Then Huayna Capac ordered to attack them. He crossed the Mara–on river over a bridge of wooden rafts that he ordered to be built probably in the surroundings of Balsas, next to Celend’n. From here, the Inca's troops went to Cajamarquilla (Bolivar), with the intention of destroying this town that was "one of the principal towns" of the 'Chachapoyas. From Cajamarquilla, an embassy consisting of women came out to meet them. In front of them there was a matron, who was a former concubine of Tupac Inca Yupanqui. They were asking for mercy and forgiveness, which the Inca granted them. In memory of this event of peace consecration, the place where the negotiation had taken place was declared sacred and closed so from now on "(...) neither men nor animals, nor even birds, if it was possible, would put their feet in it." To assure the pacification of the Chachapoyas, the Incas installed garrisons in the region. They also arranged the transfer of groups of villagers under the system of mitmac, or change of territories of human groups: "(...) it gave them grounds to work and places for houses not much far from a hill that is next to the city (Cuzco) called Carmenga." Of the Inca presence in the territory of Chachapoyas remain the architectural rests of Cochabamba, placed in the outskirts of Utcubamba in the current district of Leimebamba.

The architectural model of the Chachapoyas is characterized by circular stone constructions as well as raised platforms constructed on slopes. Their walls were sometimes decorated with symbolic figures. Some structures such as the monumental fortress of Kuelap and the ruins of Cerro Ol‡n are prime examples of this architectural style.

Chachapoyan constructions may date to the 9th or 10th century; this architectural tradition still thrived at the time of the arrival of the Spanish until the latter part of the 16th century. To be sure, the Incas introduced their own style after conquering the Chachapoyas, such as in the case of the ruins of Cochabamba in the district of Leimebamba.

The presence of two funeral patterns is also typical of the Chachapoyas culture. One is represented by sarcophagi, placed vertically and located in caves that were excavated at the highest point of precipices. The other funeral pattern was groups of mausoleums constructed like tiny houses located in caves worked into cliffs. Chachapoyan handmade ceramics did not reach the technological level of the Mochica or Nazca cultures. Their small pitchers are frequently decorated by cordoned motifs. As for textile art, clothes were generally colored in red. A monumental textile from the precincts of Paj‡ten had been painted with figures of birds. The Chachapoyas also used to paint their walls, as an extant sample in San Antonio, province of Luya, reveals. These walls represent stages of a ritual dance of couples holding hands.

Although there is archaeological evidence that people began settling this geographical area as early as 200 A.D. or before, the Chachapoyas culture is thought to have developed around 800 A.D. The major urban centers, such as KuŽlap and Gran Paj‡ten, may have developed as a defensive measure against the Huari, a Middle Horizon culture that covered much of the coast and highlands.

In the fifteenth century, the Inca empire expanded to incorporate the Chachapoyas region. Although fortifications such as the citadel at KuŽlap may have been an adequate defense against the invading Inca, it is possible that by this time the Chachapoyas settlements had become decentralized and fragmented after the threat of Huari invasion had dissipated. The Chachapoyas were conquered by Inca ruler Tupac Inca Yupanqui around 1475 A.D. The defeat of the Chachapoyas was fairly swift; however, smaller rebellions continued for many years. Using the mitmaq system of ethnic dispersion, the Inca attempted to quell these rebellions by forcing large numbers of Chachapoya people to resettle in remote locations of the empire.

It was due to the harsh treatment of the Chachapoyas during the years of subjugation that many of the Chachapoyas initially chose to side with the Spanish colonialists when they arrived in Peru. Guaman, a local ruler from Cochabamba, pledged his allegiance to the conquistador Francisco Pizarro after the capture of Atahualpa in Cajamarca. The Spanish moved in and occupied Cochabamba, extorting what riches they could find from the local inhabitants.

During Inca Manco Capac's rebellion against the Spanish, his emissaries enlisted the help of a group of Chachapoyas. However, Guaman's supporters remained loyal to the Spanish. By 1547, a large faction of Spanish soldiers arrived in the city of Chachapoyas, effectively ending the Chachapoyas independence. Residents were relocated to Spanish-style towns, often with members of several different ayllu occupying the same settlement. Disease, poverty, and attrition led to severe decreases in population; by some accounts the population of the Chachapoyas region decreased by 90% over the course of 200 years after the arrival of the Spanish.

The Chachapoyas people built the great fortress of KuŽlap, with more than four hundred buildings and massive exterior stone walls, possibly to defend against the Huari around 800 AD. Referred to as the 'Machu Picchu of the north,' KuŽlap receives few visitors due to its remote location. Other archaeological sites in the region include the settlement of Gran Paj‡ten, Gran Saposoa, the tombs at Revash, and the burial site at Laguna de los Condores (Lake of the Condors), among many others. 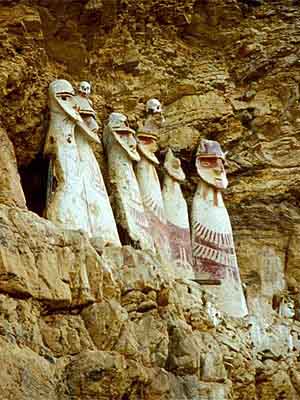 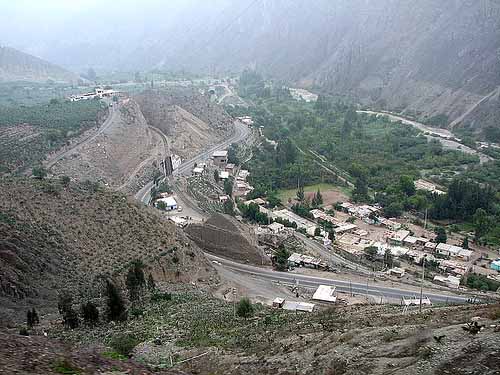 Archaeologists have discovered a lost city carved into the Andes Mountains in Peru by the mysterious Chachapoya tribe, which is also known as the 'cloud people'. According to a report in the Telegraph, the settlement covers some 12 acres and is perched on a mountainside in the remote Jamalca district of Utcubamba province in the northern jungles of Peru's Amazon. The buildings, found on the Pachallama peak, are in remarkably good condition, estimated to be over 1,000 years old and comprised of the traditional round stone houses built by the Chachapoya, the 'Cloud Forest People'.

The area is completely overgrown with the jungle now covering much of the settlement, but explorers found the walls of the buildings and rock paintings on a cliff face. The remote nature of the site appears to have protected the site from looters as archaeologists found ceramics and undisturbed burial sites. The citadel is perched on the edge of an abyss. We suspect that the ancient inhabitants used this as a lookout point from where they could spot potential enemies, according to archaeologist Benedicto Perez Goicochea.

The ruins were initially discovered by local people hacking through the jungle. They were drawn to the place due to the sound of a waterfall. The local people armed with machetes opened a path that arrived at the place where they saw a beautiful panorama, full of flowers and fauna, as well as a waterfall, some 500 meters high, said the mayor of Jamalca, Ricardo Cabrera Bravo.

Initial studies have found similarities between the new discovery and the Cloud PeoplesŐ super fortress of Kulep, also in Utcubamba province, which is older and more extensive that the Inca Citadel of Machu Picchu, but has not been fully explored or restored. Little is known about the Chachapoya, except that the mighty Incas had beaten them into submission in 1475. Spanish texts from the era describe the Cloud People as ferocious fighters who mummified their dead. They were eventually wiped out by small pox and other diseases brought by the Europeans.