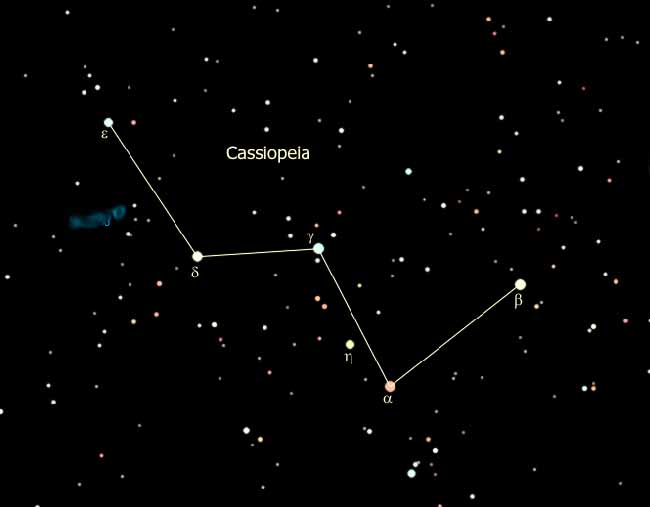 Cassiopeia contains two stars visible to the naked eye that rank among the most luminous in the galaxy: p Cas and V509 Cas. The star n Cas is a nearby (19.4 ly) binary star comprising of a yellow Sun-like dwarf and an orange dwarf star.

This beautiful constellation at the edge of the Milky Way has definitely the shape of a "W". It is assiociated with the Perseus constellation family. Sweeping this region with binoculars (or even an opera glas) is rewarding (especially the region around delta Cas).

Cassiopeia is one of the stars that orbits the Polestar throughout the year. It is shaped like a W, with a makeup of five second- and third-magnitude stars, and has been a well-known constellation since ancient times. It contains about 370 variable stars and the large variety of clusters and binaries make it easily viewable with even a small telescope. It has been known in ancient Japan as the "Yamagata Star" and "Ikari Star."

In Arabian countries this constellation is called Caph, which is also the name of beta Cas.

After dark in Fall months, turn your back on the direction the sun went down and then shift a bit northward; you will be looking to the north-east. Starting straight overhead at the zenith, measure 2 palm-widths down towards the northeast. You will see there a group of five stars forming a "lazy M". This is the constellation Cassiopeia, or "Cassiopeia's Chair". You can see why it is also called the "Celestial M". As the night progresses, this northern constellation swings counterclockwise around the polestar Polaris and towards morning will become the "Celestial W".

The stars in Cassiopeia are all less than second magnitude brightness, but as they are visible at northern latitudes for the whole night all year, you may want to know them better. The brightest, Schedar, is a multiple star, pale rose overall and slightly variable, from 2.2 to 2.8 magnitudes, while the second brightest , Caph is a white star steady at 2.4 magnitudes.

When Caph is straight up towards the zenith from Polaris, it is celestial midnight, and this star is a 24-hour clock hand moving counter-clockwise around Polaris. The middle star, known as Gamma Cass for want of a historical name, is a brilliant white binary, magnitudes 2 and 11, the first star found with bright emission spectral lines. The last two stars, nearest Polaris, share one name, Ruchbah, from Arabic for "the knee".

Cassiopeia was a queen and the wife of Cepheus, the Ethiopian king of Joppa (now known as Jaffa, in Israel), and the mother of Andromeda. The queen was both beautiful and vain, and the story of how her vanity caused great distress is told in relation to the constellation Andromeda.

After promising her daughter in marriage to Perseus, Cassiopeia had second thoughts. She convinced one of Poseidon's sons, Agenor, to disrupt the ceremony by claiming Andromeda for himself. Agenor arrived with an entire army, and a fierce struggle ensued.

In the battle Cassiopeia is said to have cried "Perseus must die". At any rate it was Perseus who was victorious, with the help of the Gorgon's head.

Perseus had recently slain Medusa, the Gorgon, and had put its head in a bed of coral. He retrieved the head and waved it in midst of the warring wedding party, instantly turning them all to stone. In the group was both Cepheus and Cassiopeia.

A contrite Poseidon put both father and mother in the heavens. But because of Cassiopeia's vanity, he placed her in a chair which revolves around the Pole Star, so half the time she's obliged to sit upside down.