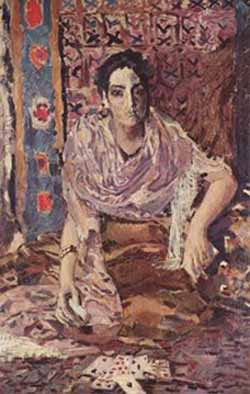 Cartomancy is a form of fortune-telling or divination using a deck of cards, the most poplular being Tarot. The practice of cartomancy has been observed since playing cards first came into use in Europe in the 14th century. Practitioners of cartomancy are generally known as cartomancers, card readers or, simply, readers. Some practitioners have claimed that cartomancy's origins date back to ancient Egyptian times, the art being derived from wisdom given to the ancient Egyptians by the scribe-god Thoth, although this belief is by no means common today.

Cartomancy using standard playing cards was the most popular form of providing "fortune telling" card readings in the 18th, 19th and 20th centuries. In English-speaking countries, a standard deck of Anglo-American bridge/poker playing cards (i.e., 52-card, four suit set) can be used in the cartomancy reading.

In recent years, however, the popularity of Tarot readings have diminished to a certain degree the popularity of the once-common cartomancy readings using standard playing cards.According to some traditions, a deck that is used for cartomancy should not be used for any other purpose. Cartomancers generally feel that the deck should be treated as a tool and cared for accordingly. Some cartomancers also feel that the cards should never be touched by anyone other than their owner.

Although a standard card deck is used for cartomancy, many other decks have also been designed that are intended specifically for use for divination, the best known of which are tarot decks. In the view of some, including the webmaster of the Aeclectic Tarot website, any deck that is not a tarot deck is referred to simply as a cartomancy deck; however, others are of the view that the use of any cards (including tarot cards or non-tarot oracle cards) in this way is still cartomancy.

The suits "Swords" and "Wands" are disputed between cartomancers, especially those that follow a Pagan path that believes each suit belongs to a special element of nature. Some consider the suits, Swords and Wands, to be switched in their meanings.

As a psychic reader who uses cards, I created my own deck in 1988 and still use it today. In truth, a skilled psychic reader does need any tools to get messages for their clients.