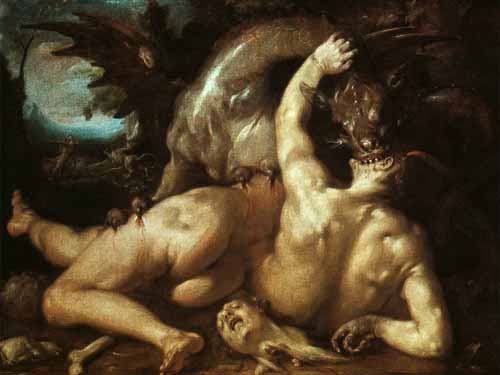 The story of the founding of Thebes is related to one of the stories in the previous section, namely the abduction of Europa, the daughter of king Agenor of Tyre in Phoenicia.

After her disappearance, Agenor commanded his sons to search for their lost sister, and one of those sons, Cadmus, came to Greece but was unsuccessful in finding her.

He consulted the Oracle of Delphi to learn what to do, and was told that his destiny was to start a great city, and to know the proper place for it by following a cow until it laid down from weariness.

After he did this, the cow was sacrificed in a ritual which also required water from a nearby sacred spring; but Cadmus was unaware that the spring was guarded by a dragon (or serpent), the offspring of the god Ares, and his men were slaughtered by the monster,

Thus Cadmus himself had to defeat the monster. After it was dead, Athena appeared and advised Cadmus what to do next: he was to remove the teeth of the dragon and plant them in the ground like seeds.

When he did this, the teeth sprouted into armed warriors, ready to attack. Cadmus tricked them into fighting one another, until only five survived, known as the Sparti (Sown men), who became the first citizens of his new city, initially named Cadmeia.