Book of the Earth 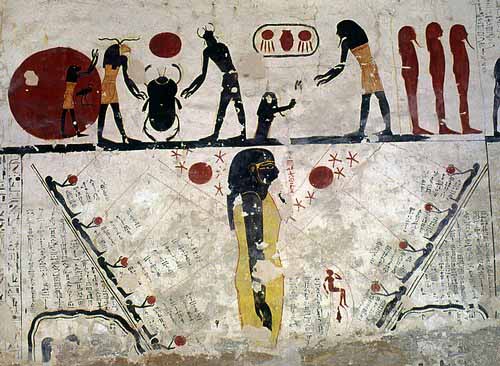 The "Book of the Earth" is an Ancient Egyptian funerary text that has been called many names such as The Creation of the Sun Disk and the Book of Aker. The Book primarily appears on the tombs of Merneptah, Twosret, Ramesses III, Ramesses VI, and Ramesses VII and serves as a counterpart to the Book of Caverns. The central figures in the story are Osiris, Ra and ba, while the over arching plot is the journey the sun takes through the earth god, Aker. 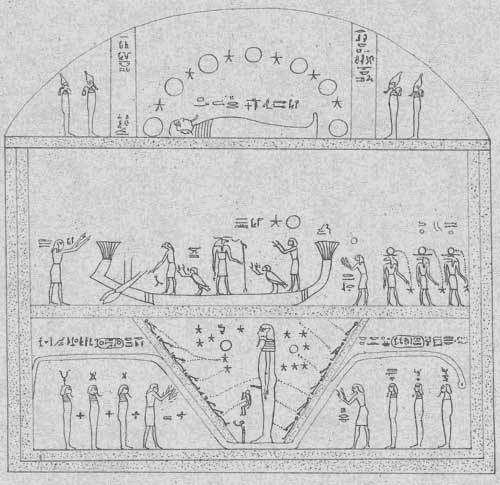 Jean-Francois Champollion was the first one to publish the scenes and texts from the tomb of Ramesses VI in his Monuments de l'Egypte where he deciphered the hieroglyphs depicted in the tombs. Alexandre Piankoff was the first one to really study the composition of the images and hieroglyphics and looked for a meaning behind it. Bruno H. Stricker provided an explanation of the book as a divine embryology in 1963.


Although it is uncertain, it is believed that the surviving panels of the original composition were divided into three registers. Thus making it unclear about whether or not scenes from other tombs are actually part of the story of the Book of the Earth.

Scholars believe that the Book consists of two halves with one half containing scenes of punishment. The Book of the Earth uses the sun disc as a reoccurring theme. The scenes are oriented so that they are facing to the right, and so that there is no visible morning goal, nor is there depicted the entry into the netherworlds. In the tomb of Ramesses VI, the book runs from right to left, which is the opposite of the typical configuration.