Book of the Heavenly Cow 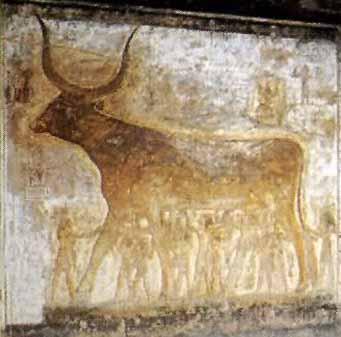 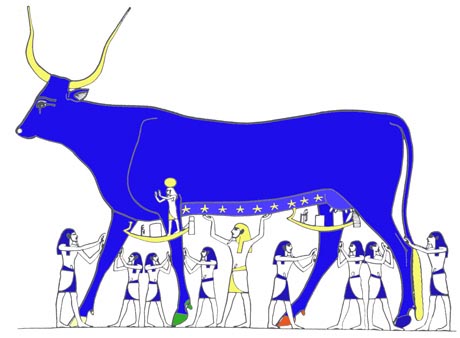 The Book of the Heavenly Cow, or The Book of the Cow of Heaven, is an Ancient Egyptian text thought to have originated during the Amarna Period and, in part, describes the reasons for the imperfect state of the world in terms of humankind's rebellion against the supreme sun god Ra. Divine punishment was inflicted through the goddess Hathor with the survivors suffering through separation from Ra who now resided in the sky on the back of Nut the heavenly cow.

With this "fall", suffering and death came into the world along with a fracture in the original unity of creation. The supreme god now changes into many heavenly bodies, creates the "Fields of Paradise" for the blessed dead, perhaps appoints Geb as his heir, hands over the rule of humankind to Osiris (Thoth ruling the night sky as his deputy) with Shu and the Heh gods now supporting the sky goddess Nut. Though the text is recorded in the New Kingdom period it is written in Middle Egyptian and may have been written during the Middle Kingdom period.

The book appears in complete form on the walls of chambers in the tombs of Seti I, Ramesses II, and Ramesses III, and a portion appears in a niche in the tomb of Ramesses VI. Its earliest known appearance, in a truncated form, is on the burial shrines of Tutankhamun. The text includes three illustrations, including a large image of the "Cow of Heaven" (the goddess Nut, personification of the sky) supported by Shu along other gods and the king.

The book may have originated from the Pyramid Texts dawn myth accounts but by the New Kingdom the idea was developed to explain death and suffering in an imperfect creation. The work has been viewed as a form of theodicy and a magical text to ensure the King's ascent into heaven. It has also been viewed as thematically similar to more developed accounts of the destruction of mankind in the Mesopotamian and biblical stories of the flood. The reign of Akhenaten, the pharaoh who had attempted to bring about a break in the existent religious traditions, may be the inspiration for the work.

The text is divided in half by the image of the cow and her supporters. There are no other firm breaks in the text, but scholars who have analyzed it suggest a loose division into four sections. The first section describes the "Destruction of Mankind", in which humans plot against Ra. After consulting with the other gods, he decides to send the goddess Hathor, as the violent Eye of Ra, to slaughter the rebels, bringing death into the world. Ra saves the rest of humanity by putting out beer dyed to resemble blood, which Hathor drinks, becoming intoxicated. The remaining sections deal with Ra's withdrawal into the sky, his organization of the underworld for the dead to dwell in, and with the theology surrounding the ba, or soul.

In 1876, Edouard Naville published English and French translations of the version of the Book of the Heavenly Cow from Seti I's tomb, followed by the version from the tomb of Ramesses III in 1885. Heinrich Brugsch published the first German-language edition in 1881. Other translations were produced by Charles Maystre in 1941, Alexandre Piankoff in 1955, and Erik Hornung in 1983 and 1991.