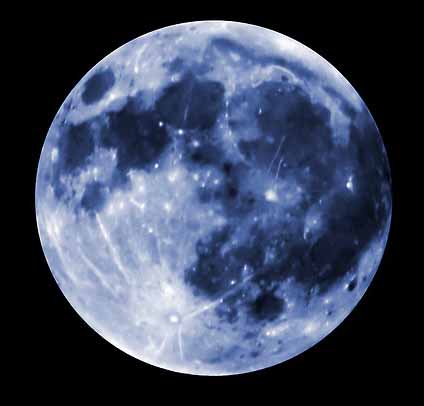 The term Blue Moon has at least three different meanings. One is a common phrase for a rare event, that really has little to do with the moon itself. Another is a description of the apparent color of the moon, which is frequently yellowish and rarely bluish. Full moons are given names in folklore, and two definitions of blue moon are a name for a rare full moon that does not have a folk name. One modern blue moon definition is for a second, extra full moon that occurs in a calendar month. The older definition of blue moon is for an extra full moon that occurs in a quarter of the year, which would normally have three full moons, but sometimes has four. Oddly, it's the third full moon in a season that has four which is counted as the "extra" full moon and named 'blue moon'.


Earliest use in English

The origin of the term Blue Moon is steeped in folklore, and its meaning has changed and acquired new and interesting meanings and nuances over time. The earliest known recorded usage was in 1528, in a pamphlet entitled Rede Me and Be Not Wrothe: "Yf they say the mone is belewe, we must believe that it is true". This implies the expression had a meaning of something that was absurd, and bears close resemblance to another moon-related adage first recorded in the following year "They woulde make men beleue ... that ye Moone is made of grene chese".

The most obvious meaning of blue moon is when the moon (not necessarily a full moon) appears to a casual observer to be unusually bluish, which is a rare event. The effect can be caused by smoke or dust particles in the atmosphere, such as happened after forest fires in Sweden in 1950 and Canada in 1951 and, notably, after the eruption of Krakatoa in 1883, which caused moons to appear blue for nearly two years.

The older meaning of blue moon to name an extra full moon, as was used in the Maine Farmer's Almanac, was the third full moon in a quarter of the year when there were four full moons. (Normally a quarter year has three full moons.) The division of the year into quarters for this purpose has the dividing line set between March 21 and March 22. This has to do with the rule for setting the date for the Christian Holy Day of Easter, which depends on the last full moon (as calculated by a somewhat inaccurate formula) on or before the Equinox on March 21 (which is also somewhat inaccurate).

This meaning of blue moon was lost when the editors of the original Farmer's Almanac died. It was recovered only when researchers for Sky & Telescope magazine noticed that the Maine Farmer's Almanac from 1829 to 1937 reported blue moons that did not fit the meaning of the term calendar blue moon described below. (See What's a Blue Moon?

In recent times, people have taken to calling a full moon a blue moon based on the Gregorian calendar. By this use of the term, a blue moon is the second of two full moons to occur in the same calendar month. This definition of blue moon originated from a mistake in an article in the 1946 Sky & Telescope magazine, which failed in an attempt to infer the earlier definition used in the original Farmer's Almanac (see above). It was helped to popularity when a Trivial Pursuit question used this as a source for one of its questions. Sky & Telescope discovered the error nearly 60 years later and the magazine printed a retraction and correction. But by the time the correction came, the calendar definition had already come into common use. Because it is so much easier to understand, the "mistaken" calendar-based meaning has stuck.

Calendar blue moons occur infrequently, thus using the saying once in a blue moon to describe a rare event is still meaningful. The infrequency of extra moons in a month is because the length of the Gregorian calendar months are all very close to the length of the 29.5306 day period (on average) of the moon's phases: the synodic month, or lunation. Second full moons are possible because every month except February is longer than this period by 1 or 2 days, but the odds are low. One calendar blue moon occurs Ń on average Ń every 2.72 years. The next two calendar blue moons (based on UTC) will be on June 30, 2007 (but May 31, 2007 in the Western Hemisphere; see below); and December 31, 2009. Because February (according to UTC) will have no full moon in 2018, January and March will each have a calendar blue moon that year.

Occasionally whether a moon is called blue depends on the time zone. Any full moon occurs simultaneously everywhere, but at that moment clocks and calendars are not the same.

For example, when it is early evening on August 31 in Europe, it is already early morning September 1 in Australia. Hence, residents of London seeing a full moon when their clocks and calendar say it is August 31 would call what they see a calendar blue moon. People seeing the same full moon from Sydney would note by their clocks and calendar that it is the early morning of September 1, and they would not term it a blue moon.

Because this is confusing, astronomers worldwide and the calendar makers who rely on them typically choose the time zone of the Royal Greenwich Observatory, in England, or the nearly identical UTC time zone. As a practical matter, because the moon seems to the casual viewer to be full for almost three days, the use of a foreign time zone for calendar markings for full moons makes little practical difference.