Biorhythm measurements are an attempt to predict various aspects of a person's life through simple mathematical cycles. The notion has no more predictive power than chance, and is now considered a classic example of pseudoscience by modern science.

According to believers in biorhythms, a person's life is affected by rhythmic biological cycles which affect one's ability in various domains, such as mental, physical, and emotional activity. These cycles begin at birth and oscillate in a steady sine wave fashion throughout life; thus, by modeling them mathematically, a person's level of ability in each of these domains can be predicted from day to day.

Most biorhythm models use three cycles: a 23-day "physical" cycle, a 28-day "emotional" cycle, and a 33-day "intellectual" cycle. Although the 28-day cycle is the same length as the average woman's menstrual cycle and was originally described as a "female" cycle, the two are not necessarily in any particular synchronization. Each of these cycles varies between high and low extremes sinusoidally, with days where the cycle crosses the zero line described as "critical days" of greater risk or uncertainty.

In addition to the three popular cycles, various other cycles have been proposed, based on linear combination of the three, or on longer or shorter rhythms.[


Biorhythms are the natural monthly fluctuations that govern... 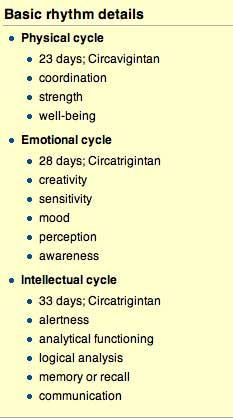 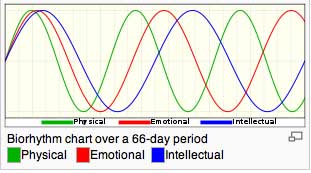