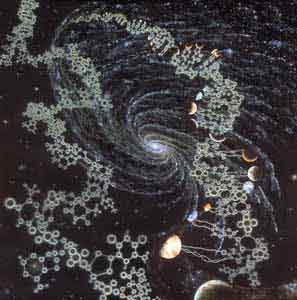 Astrobiology is an interdisciplinary field, combining aspects of astronomy, biology and geology, which is focused primarily on the study of the origin, distribution and evolution of life. It comes from the Greek words astron = star, bios = life and logos = word/science), and is also known as exobiology (Greek: exo = out) or xenobiology (Greek: xenos = foreign).

Some major astrobiological research topics include:

Exobiology and xenobiology are terms also found in science fiction, although typically such terms refer to the speculative biology of an extraterrestrial. A xenobiologist is usually a human doctor or biologist who is expert on the physiology of alien organisms and life forms.

Although astrobiology is an emerging field, the question of whether life exists elsewhere in the universe is a verifiable hypothesis and thus a valid line of scientific enquiry. Astrobiology does not claim to be a pure scientific discipline in the sense of physics or biology but rather represents an effort by researchers in different disciplines to attempt answers to questions about life by drawing on knowledge of multiple scientific fields. Since we have only one example of a planet teeming with life most work is speculative, educated guesses based on fundamental laws of physics, (bio-)chemistry, and our current understanding of biology.

A particular focus of current astrobiology research is the search for life on Mars. There is a growing body of evidence to suggest that Mars has previously had a considerable amount of water on its surface; water is considered to be an essential precursor to the development of life, although this has not been conclusively proven.

Missions specifically designed to search for life include the Viking program and Beagle 2 probes, both directed to Mars. The Viking results were inconclusive and Beagle 2 failed to transmit from the surface and is assumed to have crashed. A future mission with a strong astrobiology role would have been the Jupiter Icy Moons Orbiter, designed to study the frozen moons of Jupiter - some of which may have liquid water - had it not been canceled.

In 2004, the spectral signature of methane was detected in the Martian atmosphere by both Earth-based telescopes as well as by the Mars Express probe. Methane has a relatively short half-life in the Martian atmosphere, so there must be a recent source of it. Since one possible source, active volcanism, has thus far not been detected on Mars, this has led scientists to speculate that the source could be (microbial) life.

Missions to other planets (such as ExoMars and Beagle 2: Evolution to Mars and Cassini to Saturn's moon Titan) hope to further explore the possibilities of life on other planets in our solar system.

Secondary questions, such as the availability of suitable worlds and chemical precursors, have had much success. Numerous extrasolar planets have been detected using the "wobble method" and transit method, showing that planets are more common than previously postulated, though due to technological limitations, most of the planets so far discovered have been hot gas giants in close orbit with their stars, thought to be inhospitable to any life. It is not yet known whether our solar system, with rocky inner planets ideal for life, is of an aberrant configuration. Improved detection methods and increased observing time will undoubtedly discover more planetary systems, and possibly ones more like ours.

The progress of infrared astronomy and submillimetre astronomy has "opened" additional star systems. Infrared searches have detected belts of dust and asteroids around distant stars, underpinning the formation of planets. Some infrared images purportedly contain direct images of planets, though this is disputed. Infrared and submillimetre spectroscopy has identified a growing number of chemicals around stars which underpin the origin or maintenance of life.

When looking for life in other planets, some simplifying assumptions are useful to reduce the size of the task of astrobiologists. One is to assume that the vast majority of life-forms in our galaxy are based on carbon chemistries, as are all life-forms on Earth. While it is possible that non carbon-based life exists, carbon is well known for the unusually wide variety of molecules that can be formed around it.

The presence of liquid water is also a useful assumption, as it is a common molecule and provides an excellent environment for the formation of complicated carbon-based molecules that could eventually lead to the emergence of life. Some researchers posit environments of ammonia, or more likely water-ammonia mixtures. These environments are considered suitable for carbon or noncarbon life, while opening more temperature ranges (and thus worlds) for life.

A third assumption is to focus on Sun-like stars. Very big stars have relatively short lifetimes, meaning that life would not likely have time to evolve on planets orbiting them. Very small stars provide so little heat and warmth that only planets in very close orbits around them would not be frozen solid, and in such close orbits these planets would be tidally "locked" to the star. Without a thick atmosphere, one side of the planet would be perpetually baked and the other perpetually frozen.

In 2005, the question was brought back to the attention of the scientific community, as the long lifetimes of red dwarves could allow some biology on planets with thick atmospheres. This is significant, as red dwarves are extremely common.

About 10% of the stars in our galaxy are Sun-like, and there are about a thousand such stars within 100 light-years of our Sun. These stars would be useful primary targets for interstellar listening. However, we only know of one planet where life exists: our own. There is no way to know if any of the simplifying assumptions are correct.


The Sciences of Astrobiology

Most astronomy-related astrobiological research falls into the category of extrasolar planet (exoplanet) detection, the hypothesis being that if life arose on Earth then it could also arise on other planets with similar characteristics. To that end, a number of instruments designed to detect 'Earth-like' exoplanets are under development, most notably NASA's Terrestrial Planet Finder (TPF) and ESA's Darwin programs. A number of less ambitious ground-based efforts are also underway (see exoplanet).

The goal of these missions is not only to detect Earth-sized planets but also to image them spectroscopically. By examining planetary spectra it will be possible to determine the basic composition of an extrasolar planet's atmosphere and surface; given this knowledge, it may be possible to assess the likelihood of life being found on that planet. A NASA research group, the Virtual Planet Laboratory (VPL), is using computer modeling to generate a wide variety of 'virtual' planets to see what they would look like if viewed by TPF or Darwin. It is hoped that once these missions come online, their spectra can be cross-checked with these 'virtual' planetary spectra for features that might indicate the presence of life. One mission is planned to the Jupiter moon, Europa. This mission is designed to search for life in the ocean of this moon.

An estimate for the number of planets with (intelligent) extraterrestrial life can be gleaned from the Drake equation, essentially an equation expressing the probability of intelligent life as the product of factors such as the fraction of planets that might be habitable and the fraction of planets on which life might arise. However, whilst the rationale behind the equation is sound, it is unlikely that the equation will be constrained to reasonable error limits any time soon.

The first term, Number of Stars, is generally constrained within a few orders of magnitude. The second and third terms, Stars with Planets and Planets with Habitable Conditions, are being evaluated for the Sun's neighborhood. Another associated topic is the Fermi paradox, which suggests that if intelligent life is common in the universe then there should be obvious signs of it. This is the purpose of projects like SETI, which tries to detect signs of radio transmissions from intelligent extraterrestrial civilizations.

Another active research area in astrobiology is solar system formation. It has been suggested that the peculiarities of our solar system (for example, the presence of Jupiter as a protective 'shield' or the planetary collision which created the Moon) may have greatly increased the probability of intelligent life arising on our planet. No firm conclusions have been reached so far.

Extremophiles (organisms able to survive in extreme environments) are a core research element for astrobiologists. Such organisms include biota able to survive kilometers below the ocean's surface near hydrothermal vents and microbes that thrive in highly acidic environments. Characterization of these organisms - their environments and their evolutionary pathways - is considered a crucial component to understanding how life might evolve elsewhere in the universe. Recently, a number of astrobiologists have teamed up with marine biologists and geologists to search for extremophiles and other organisms living around hydrothermal vents on the floors of our own oceans. Scientists hope to use their findings to help them create hypotheses on whether life could potentially exist on certain moons in our own solar system.

The origin of life, as distinct from the evolution of life, is another ongoing field of research. Oparin and Haldane postulated that the conditions on the early Earth were conducive to the formation of organic compounds from inorganic precursors and thus to the formation of many of the chemicals common to all forms of life we see today. The study of this process, known as prebiotic chemistry, has made some progress but it is still unclear whether or not life could have formed in such a manner on Earth. The alternative theory of panspermia is that the first elements of life may have formed on another planet with even more favorable conditions, and then have been carried over to Earth by a variety of means.

The fossil record provides the oldest known evidence for life on Earth. By examining this evidence, geologists are able to better understand the types of organisms that arose on the early Earth. Some regions on Earth, such as the Pilbara in Western Australia are also considered to be geological analogs to regions of Mars and as such might be able to provide clues to possible Martian life.

Astrobiology has had to struggle for respectability; while many scientists are enthusiastic about the broad questions involved, there remains concern as to whether astrobiology is distinct enough from its parent disciplines (particularly biology) to constitute a true science. Astrobiology is at present a largely speculative extrapolation of Earth conditions into off-Earth environments. Extremophiles, for example, may reveal how life has evolved in exotic locales throughout the universe, yet this remains unverified and the study of extremophiles is adequately covered under the rubric of biology. This ambivalent status is reflected by academic acceptance: those interested may specialize in astrobiology as a subset of an established science. Although some have thought a formal degree program in astrobiology unlikely, the University of Glamorgan, UK, started just such a degree in 2006.

Perhaps a more serious criticism of astrobiology is whether the very act of extrapolating from a single data source is unscientific. At best, this creates tautologies ("Earth-like life will evolve under circumstances which are sufficiently Earth-like for a sufficient period of time") and at worst it may abrogate critical aspects of the scientific method. Characterization of non-Earth life is extraordinarily unsettled; hypotheses and predictions as to its existence and origin vary wildly; true astrobiological experiments (with modest exceptions such as the ALH84001 meteorite) simply cannot occur at present. Finally, astrobiology has been criticized for being unimaginative in the tacit assumption that Earth-like life presents the most likely template for life elsewhere.

There are some who now consider xenobiology separate from astrobiology for this reason. They stipulate that astrobiology is the search for earth-like life outside of our solar system. Xenobiologists, they say, are concerned with the possibilities open to us once we consider that life need not be carbon-based or oxygen-breathing, so long as it reproduces and displays the other 4 prerequisites for life.