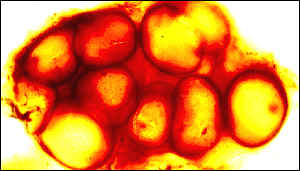 Cyanobacteria - they changed the face of the Earth

The earliest direct evidence of organisms releasing oxygen into Earth's atmosphere has been found in the ancient remains of bacterial slime from Australia, researchers reported Wednesday. 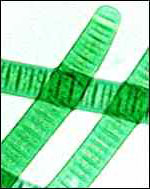 "Life wouldn't be what it is today if we didn't have oxygen in the atmosphere and in the ocean," said Roger Summons, the chief research scientist for the Australian Geological Survey Organization and the lead author of the study in Wednesday's journal Nature.

The research may also provide a tool in the search for life on Mars.

Scientists had long suspected that organisms called cyanobacteria first started converting sunlight and carbon dioxide into food energy and oxygen billions of years ago. But no evidence had been previously found in fossils.

Summons and his colleagues tested samples from a drill core in Western Australia's Hammersley Basin, one of the most geologically stable areas on Earth, and later, samples from Mexico, Germany and Israel.

They discovered a durable molecular signature - "fingerprints" - unique to certain cyanobacteria that lived on the shores of the ancient oceans, long before plants, animals and other complex life emerged.

"This is the first good evidence of early oxygenic photosynthesis," said Jere Lipps, professor of biology at the University of California, Berkeley. "That's important because we couldn't be certain based on microfossils or other geologic evidence."

The technique of identifying the molecular signature of ancient organisms also could be used in the hunt for life elsewhere in the universe.

David McKay, a NASA researcher who led a 1996 team that announced a meteorite from Mars showed evidence of ancient life, agreed.

"This is really potentially useful," he said Wednesday. "We think that this is the first of a number of molecular biomarkers that may be documented in the future and that can be applied directly to returned Mars samples."

Forms of cyanobacteria exist today, often referred to as blue-green algae because they resemble the slimy substance. They can be found in places like the hot springs of Yellowstone National Park.

The microbes may have been pumping oxygen into the atmosphere for as long as 3 1/2 billion years - 1 billion years after the Earth formed.

"The further you go back, there are fewer and fewer well-preserved samples," said Linda Jahnke, a study co-author and bacteriologist at NASA's Ames Research Center in Moffett Field. "It's a fact of the reworking of the surface of the Earth. Things are being buried all the time."

Danish researchers have found evidence of what they believe to be the world's oldest fossils -- plankton dating back 3.7 billion years in Greenland, according to Journal of Science

The oldest fossils found to date were bacteria believed to be 3.5 billion years old, according to researchers who said that the bacteria were more complex than the Greenland find.

Scientists have long believed that the bacteria evolved from more primitive ancestors, although Earth's geological changes have wiped out most fossil traces. In the absence of any real fossil record, geologist Minik Rosing of the Geological Museum of Copenhagen tried to find the fossil record in the chemical detritus, or debris left by the organisms when they disappeared.

Looking for microscopic traces of carbon left by primitive plankton, Rosing and his team went to western Greenland to search for sedimentary rocks on the bottom of a 3.7 billion-year-old ocean. "These data and the mode of occurrence indicate that the reduced carbon represents biogenic detritus which was perhaps derived from planktonic organisms," Rosing wrote in Science.