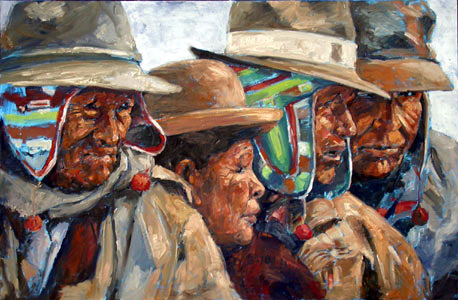 The Aymara are a native ethnic group in the Andes region of South America; about 2.3 million live in Bolivia, Peru, Northern Chile, and Northern Argentina (in particular in Salta province). They lived in the region for many centuries before becoming a subject people of the Inca, and later of the Spanish in the 16th century.

The Aymara have existed in the Andes in what is now Bolivia (and, to a lesser extent, Peru) for over 2,000 years, according to some estimates. Some scholars, and many Aymara themselves, associate them with the highly advanced civilization centered at Tiwanaku, though due to the lack of written history this cannot be proven conclusively, and does not fit with the linguistic evidence.

The region where Tiwanaku and the modern Aymara are located, the Altiplano, was conquered by the Incas under Huayna Capac (reign 1483-1523), although the exact date of this takeover is unknown. It is most likely that the Inca had a strong influence over the Aymara region for some time. The architecture for which the Inca are now known is clearly modeled after the Tiwanaku style.

Though conquered by the Inca, the Aymara retained some degree of autonomy under the empire. Looking at the history of the languages, however, rather than their current distribution, it is clear that Aymara was once spoken much further north, at least as far north as central Peru, where most Andean linguists feel it is most likely that Aymara originated.

In fact, the Inca nobility may themselves originally have been Aymara-speakers, who switched to Quechua only shortly before the Inca expansion: the Cuzco area has many Aymara placenames, and the so-called 'Secret language of the Incas' actually appears to be a form of Aymara.

Most Aymara-speakers now live in the Lake Titicaca region, and are concentrated south of the lake. The urban center of the Aymara region is El Alto, a 750,000-person city near the Bolivian capital La Paz. In addition, numerous Aymara live and work as campesinos in the surrounding Altiplano. The Aymara language does have one surviving relative, spoken by a small, isolated group of about 1000 people far to the north in the mountains inland from Lima in Central Peru (in and around the village of Tupe, Yauyos province, Lima department). This language, known as Jaqaru/Kawki, is of the same family as Aymara, indeed some linguists refer to it as 'Central Aymara', alongside the main 'Southern Aymara' branch of the family spoken in the Titicaca region.

The native language of the Aymara is also named Aymara; in addition, many Aymara speak Spanish, which is the dominant language of the countries in which they live, as a second language. The Aymara flag is known as the Wiphala; it consists of seven colors quilted together with diagonal stripes. Aymara have grown and chewed coca plants for centuries, and used its leaves in traditional medicine as well as in ritual offerings to the sun god Inti and the earth goddess Pachamama. Over the last century, this has brought them into conflict with state authorities who have carried out coca eradication plans in order to prevent the creation of the drug cocaine, which is created by extracting the chemical from coca leaves in a complex chemical process. Coca plays a profound role in the indigenous religions of both the Aymara and the Quechua, and in more recent times has become a symbol of cultural identity.

There are numerous movements for greater independence or political power for the Aymara. These include the Tupac Katari Guerrilla Army, led by Felipe Quispe, and the Movement Towards Socialism, a political party organized by cocalero Evo Morales. These and many other Aymara organizations have been involved in activism in Bolivia, including the 2003 Bolivian Gas War and the 2005 Bolivia protests.

One of the goals of the movement, as put forth by Quispe, is the establishment of an independent indigenous state, Collasuyu, named for the eastern (and largely Aymara) region of the Inca empire which covered the southeastern corner of Peru and much of what is today Bolivia. Evo Morales has run for president in several recent elections with several close calls, and in 2005 he finally won a surprise victory, winning the largest majority vote since Bolivia returned to democracy and becoming the first indigenous president of Bolivia. He is also credited with the ousting of Bolivia's previous two presidents.


Backs to the Future PhysOrg - June 13, 2006
New analysis of the language and gesture of South America's indigenous Aymara people indicates they have a concept of time opposite to all the world's studied cultures -- so that the past is ahead of them and the future behind.