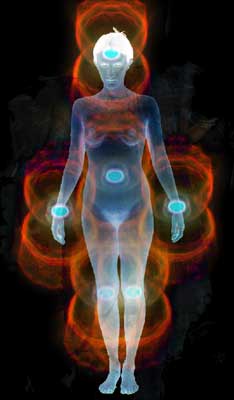 Everything has an aura. 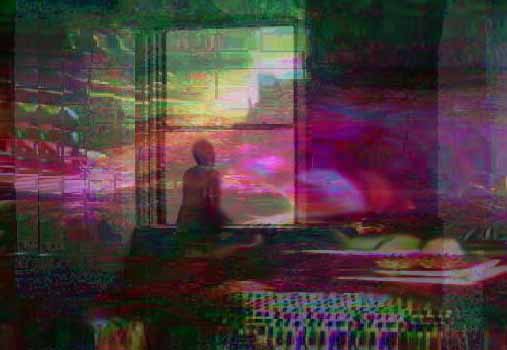 In metaphysics, Aura refers to the energy field emanating from the surface of a person or object. This emanation is visualized as an outline of cascading color and may be held to represent soul vibrations, chakra emergence, or a reflection of surrounding energy fields.

Auras may be viewed by the naked eye, though some psychics, like Edgar Cayce, believe this ability weakens with age. Focused training may improve one's ability to see auras. Layers of aura are separate and distinct yet connected to all the remaining layers. In the books of Carlos Castaneda auras are referred to as luminous cocoons.

However, these energy fields are sometimes claimed to be documented by a rare form of photography called Kirlian photography. 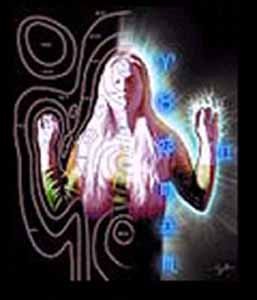 Auras are in a constant state of flux.

When I look at a photo of a person who has no aura - or the aura appears black - I know the person has crossed over - in part - or totally - as their physical body no longer has an electromagnetic energy field.

Your aura usually consist of more than one color at a time. 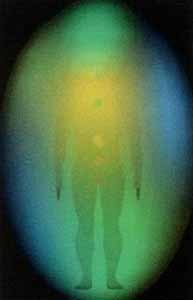 It can extend out very far or remain close to the body, which occurs when the person is protecting themselves form someone or something.

Some people can psychically look at the subject and see images within the person's aura. These images may include symbols/archetypes, people, digits, or even another aspect of the person's soul that is coming through in their third dimensional aura from another realm.

When two people have just been lovers, they will show up in each other auras, the color of their auras depending on the nature of their relationship. 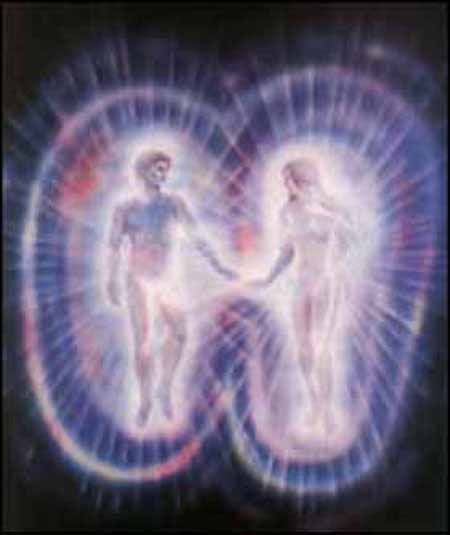 When people have done healing work together, or shared physical contact, they will share a common auric field for a period of time as they have merged their electromagnetic energies. 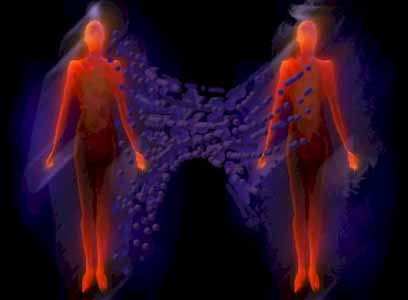 Auras can be seen physically, or sensed psychically, or both.

To practice seeing auras - have the subject stand in front of a white background and look to the side of their body - either side is fine.

Daylight is often the best light as the sun's rays are full spectrum.

If you watch the person for a minute, you will see their electromagnetic energies as sort of wavy lines of energies. This looks a lot like the energy you see when you are watching an airplane taking off in a movie.

Please do not strain you eyes. Relax. You might want to let your eyes go a little out of focus while you are looking for an aura.

You may only see the aura for a few seconds, then it will disappear.

After you see that energy, you may also see or sense a color frequency, maybe two or three colors, in the aura.

After several minutes you should be able to see some sort of energy field around the person, even if you cannot determine the color.

Remember that auras change all the time according to the person's mood and environment.

As with all psychic tools, learning to read auras seems easy for some people while others need lost of practice.

The color of your aura is determined by your emotions, physical surroundings, spiritual work you are doing, items in the room, such as crystals which can magnify or change the colors of any aura.

As everything that is in our reality is created from electromagnetic energy, everything has an aura - plants, animals, etc.

When you are working as a healer, you are bringing balance to the person's electromagnetic field.

You should observe the person slowly then determine if they have holes in their aura. It would look as if the electromagnetic energies had suddenly stopped.

This will tell you where there is a problem or imbalance in their physical body.

I always suggest you discuss the problem with the person first. All physical illness comes from the emotional which created the problem in the first place.

You must find the psychological cause of the problem first, to determine if the person actually wants to be healed on an emotional and soul level. If they are they are not ready, the healing and balancing can only last for a sort time and will revert back, or manifest in another area of the body. All healing must be done on the soul level first!

You can use your hands in a slow sweeping motion over the part of the aura where the energy (chi) does not appear to flow properly.

As you move your hands across the person's aura - you should both experience some sort of change in the energy flow.

You do not touch the person--just the auric field of that person. This healing technique goes to Therapeutic Touch.

If you would like to see your own aura, find a mirror that is in a well lit room. Relax. Look at your head or head and shoulder area. Focus on one side of your head. Soon you should be able to see the electromagnetic energies as a field of light - around your head.

Do you want to feel the electromagnetic energies coming from your body? Try holding the palms of your hand facing each other - about two inches apart. Wait a few second. You will feel something. If you hands are nervous and cold, that will hamper the energies.

Try moving your palms further and further apart slowly. See how far you can go before you no longer feel the 'pull'. Remember to check periodically by moving your hands slightly and slowly.

Now try pointing your fingers towards each other and feel those energies. Again move your fingertips to and fro.

You can repeat this with another person.

Aura energies are linked to colors, the chakra system, musical tones/notes, as they all resonate to the same frequency. Sound, light and color are all interconnected at source.

I have had fun changing my aura while taking an Aura or Kirlian Photo. Meditation or working with anything that can enhance your electromagnetic energy fields will raise your frequency and move you to a higher frequency color of light. In other words - you hold a few clear quartz crystals and meditate--->take your picture----> it will have a clear white tone unless you have a serious medical problem. So as you see all things are connected by the flow of the electromagnetic energy fields that create our reality. 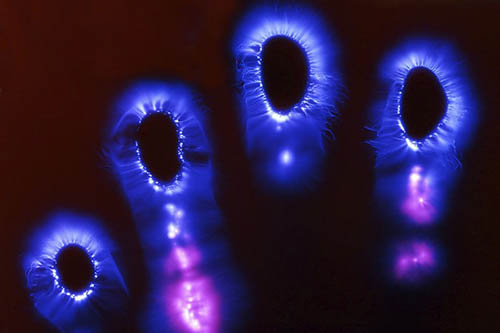 What Are the Auras Around People Seen in Photos?   Epoch Times - February 29, 2016
In some spiritual traditions, people are said to have auras around them. Sometimes the auras are described as being various colors or at various levels of intensity, depending on the person's characteristics. Photos taken using special methods are said to show the energy people emanate, their auras. Several theories to explain what auras might be:

A. biophotons released during injury
B. the skin's moisture
C. body heat
D. a type of energy communication
E. a bioenergy field
F. the result of a condition called synesthesia. 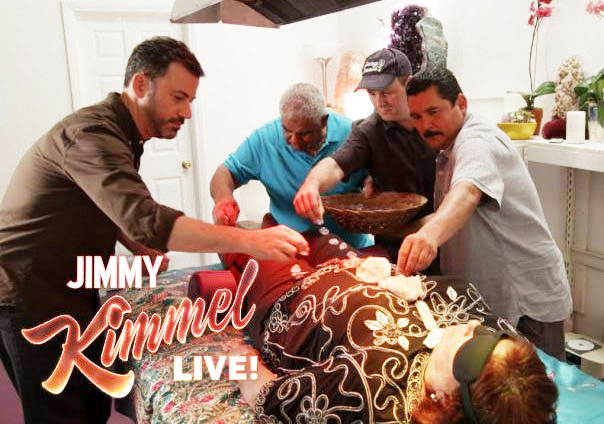 Jimmy Kimmel took his aunt Chippy to the Aura Shop to have her aura photo taken and read. Auras, or energy field pictures around a sentient life form, goes with someone's mood in that moment. I can think the color GOLD and the image will show up as gold. I can pretty much think any color or combinations of colors and voila that's what appears around me. There's nothing spiritual about it - just science and math as is everything else in our reality. 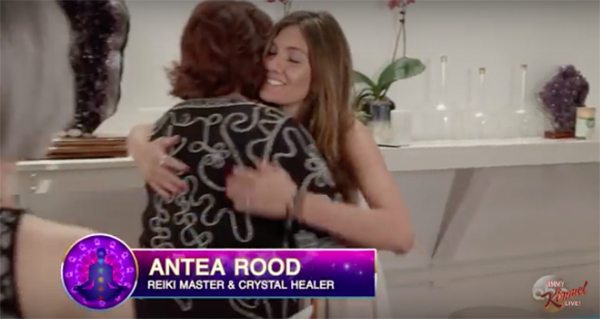 Kimmel set up a fake aura photo of Chippy allowing her to believe she had horns therefore needed crystal healing by one of our cliche long haired beautiful goddess looking woman who would fix her ... Just lay back, relax, close your eyes, etc. The way they presented the laying of crystals on the body, really made a mockery of everything some people believe in, but Kimmel is a comedian and in the end told his aunt the truth. Watch the Video

Too many people are taken in by charlatans who they feel are going to heal them, raise their frequency, and all that jazz, but none of that is true. What is true is that we live in a simulation and going about our lives as is program. That's it ... 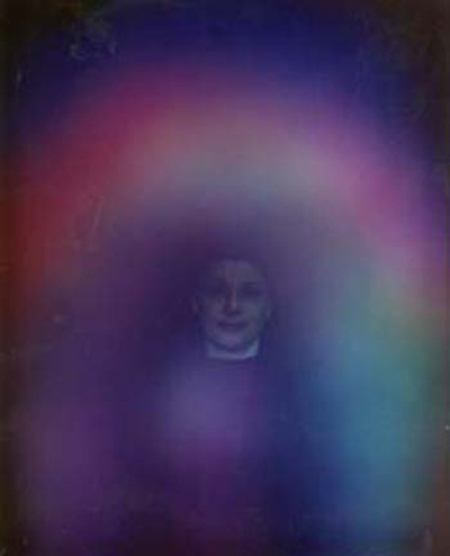 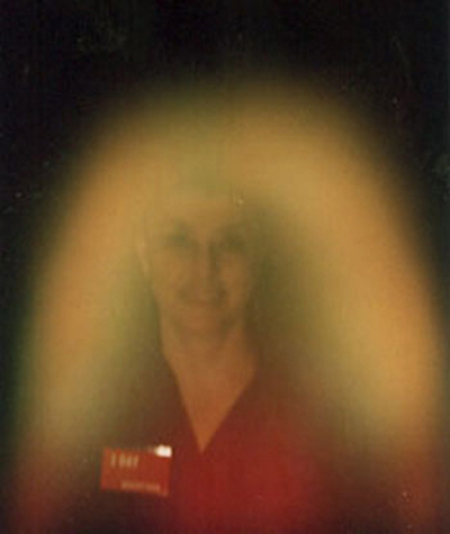 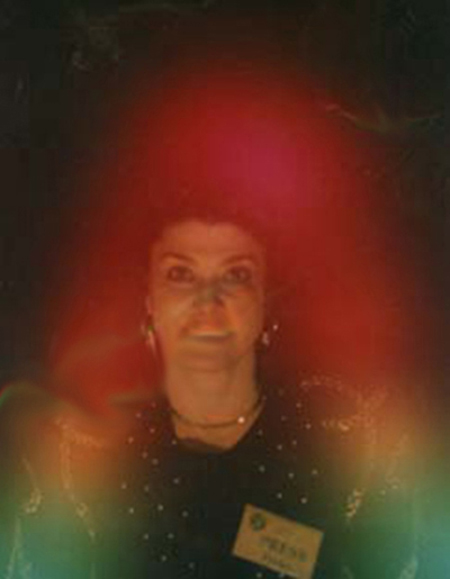 COLORS: THEIR MEANINGS AND FREQUENCIES