Asteroids In the News

Earth's oldest asteroid impact 'may have ended ice age'   BBC - January 22, 2020
Scientists have identified the world's oldest asteroid crater in Australia, adding it may explain how the planet was lifted from an ice age. The asteroid hit Yarrabubba in Western Australia about 2.2 billion years ago - making the crater about half the age of Earth, researchers say. Their conclusion was reached by testing minerals found in rocks at the site. The scientists say the find is exciting because it could account for a warming event during that era.

Comet Ingredients Swallowed by an Asteroid, Found Sealed Inside a Meteorite   Live Science - April 15, 2019
The raw materials from a comet have been found sealed inside a pristine, primitive meteorite. The meteorite was found in the LaPaz icefield of Antarctica and has weathered very little since the time it crashed to Earth. According to a new study published today (April 15) in the journal Nature Astronomy, researchers found that this sample of space rock contains something strange: bits of the building blocks of a comet that became trapped in the meteorite's parent asteroid just 3 million years after the solar system formed. Because this sample of cometary building block material was swallowed by an asteroid and preserved inside this meteorite, it was protected from the ravages of entering Earth's atmosphere.


The Asteroid Bennu Keeps Spinning Faster and Scientists Aren't Sure Why   Space.com - March 12, 2019
Right now, the asteroid known as Bennu is spinning once every 4.3 hours. But scientists working on NASA's OSIRIS-REx mission to the space rock have used data gathered before the probe's arrival to calculate that Bennu's rotation rate is speeding up over time by about 1 second each century.

Astronomers Around the World Are Training in Case a Giant Asteroid Threatens Earth   Gizmodo - March 5, 2019

Touchdown! Japanese spacecraft Hayabusa 2 lowers itself to asteroid Ryugu and fires a pellet at the surface in historic attempt to take a 'bite' of its dust and return the samples to Earth   Daily Mail - February 21, 2019

Hayabusa-2: Japan spacecraft touches down on asteroid   BBC - February 22, 2019
A Japanese spacecraft has touched down on an asteroid in an attempt to collect a sample of rock from the surface. The Hayabusa-2 probe was trying to grab the sample from a pre-chosen site on the asteroid Ryugu just before 23:00 GMT on 21 February. The spacecraft reached asteroid Ryugu in June 2018 after a three-and-a-half-year journey from Earth. It is expected to return to Earth with the rocky material it has cached in 2020. During sample collection, the spacecraft approached the 1km-wide asteroid with an instrument called the sampler horn. On touchdown, a 5g "bullet" made of the metal tantalum was fired into the rocky surface at 300m/s. The particles kicked up by the impact should have been be caught by the sampler horn. 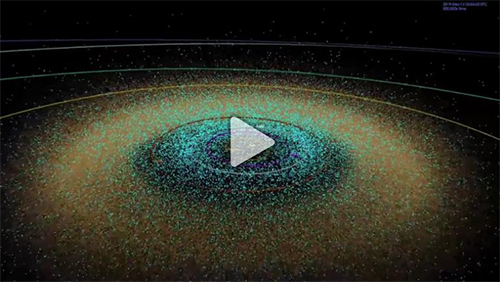 An odd kind of asteroid has been hiding out in our solar system, close to Venus, and it took a new state-of-the-art surveying camera to detect it. The Zwicky Transient Facility, known as ZTF, was installed on the Samuel Oschin Telescope at the California Institute of Technology's Palomar Observatory in March. Since then, it has observed over a thousand supernovae outside our galaxy, extreme cosmic events and more than a billion Milky Way stars.


Water found on asteroid, confirming Bennu as excellent mission target   Science Daily - December 11, 2018
Spectral observations made by the OSIRIS-REx spacecraft identified hydrated minerals across the asteroid, confirming that Bennu, a remnant from early in the formation of the solar system, is an excellent specimen for the OSIRIS-REx mission to study the composition of primitive volatiles and organics.


Lonely asteroid tells solar system story   BBC - May 9, 2018
Researchers have observed the first object of its kind - a carbon-rich asteroid in the Kuiper Belt. Orbiting in the collection of icy rubble beyond Neptune, the asteroid's composition strongly suggests it did not form there. Instead, the 300km-wide object may have been ejected from an orbit among the giant planets, during the turbulent early history of the Solar System. The object is so distant, it took scientists several years to analyze.


Primordial asteroids discoveries include a void in the main belt and the oldest family of asteroids   Science Daily - August 3, 2017
Astronomers recently discovered a relatively unpopulated region of the main asteroid belt, where the few asteroids present are likely pristine relics from early in solar system history. The team used a new search technique that also identified the oldest known asteroid family, which extends throughout the inner region of the main asteroid belt.


Clues to ancient giant asteroid found in Australia   PhysOrg - May 16, 2016
Scientists have found evidence of a huge asteroid that struck the Earth early in its life with an impact larger than anything humans have experienced. Tiny glass beads called spherules, found in north-western Australia were formed from vaporized material from the asteroid impact. The impact would have triggered earthquakes orders of magnitude greater than terrestrial earthquakes, it would have caused huge tsunamis and would have made cliffs crumble.


Congress Passes Landmark Space Mining Rights Bill   Epoch Times - November 11, 2015
The Senate has passed legislation expected to spur the development of the space mining industry, by establishing property rights for minerals harvested in outer space and lengthening the period for which space companies would be exempt from certain regulatory bodies. Rare earth minerals are abundant on asteroids throughout the solar system, including the six platinum group metals, and the value of minerals buried inside a single asteroid could figure in the hundreds of billions.


Asteroid Impacts 3.3 Billion Years Ago Caused Earth's Oceans To Boil   Huffington Post - May 28, 2015
Some 3.3 billion years ago, monster asteroids -- in some cases bigger than Rhode Island -- repeatedly slammed into the Earth with impacts so violent that air temperatures soared to 932 degrees Fahrenheit for weeks at a time, according to a new study published in the journal Geology.


'Largest ever asteroid impact' found in Australia   BBC - March 24, 2015
The 400-kilometre (250-mile) wide area is buried deep in the earth's crust and consists of two separate impact scars. The team behind the discovery, from the Australian National University (ANU), said the asteroid broke into two before it hit, with each fragment more than 10km across. The impact is thought to have occurred at least 300 million years ago. The surface crater has long since disappeared from central Australia's Warburton Basin but geophysical modeling below the surface found evidence of two massive impacts.


Largest-ever meteorite crater found in Australian outback   Telegraph.co.uk - March 23, 2015
Scientists have discovered two deep scars in the earth's crust in outback Australia that are believed to mark the remains of a meteorite crater with a 250-mile diameter Đ the largest ever found. The scars are each more than 120 miles in diameter and are believed to mark the spot where a meteorite split into two, moments before it slammed into earth. The impact is believed to have occurred more than 300 million years ago.


Asteroid impacts on Earth make structurally bizarre diamonds   PhysOrg - November 21, 2014
Scientists have argued for half a century about the existence of a form of diamond called lonsdaleite, which is associated with impacts by meteorites and asteroids. A group of scientists based mostly at Arizona State University now show that what has been called lonsdaleite is in fact a structurally disordered form of ordinary diamond.

Two Rings for Asteroid Chariklo   NASA - April 9, 2014
Asteroids can have rings. In a surprising discovery announced two weeks ago, the distant asteroid 10199 Chariklo was found to have at least two orbiting rings. Chariklo's diameter of about 250 kilometers makes it the largest of the measured centaur asteroids, but now the smallest known object to have rings. The centaur-class minor planet orbits the Sun between Saturn and Uranus. The above video gives an artist's illustration of how the rings were discovered. As Chariklo passed in 2013 in front of a faint star, unexpected but symmetric dips in the brightness of the star revealed the rings. Planetary astronomers are now running computer simulations designed to investigate how Chariklo's unexpected ring system might have formed, how it survives, and given the asteroid's low mass and close passes of other small asteroids and the planet Uranus, how long it may last.


Icy Chariklo asteroid has ring system   BBC - March 26, 2014
The asteroid Chariklo has been confirmed as the smallest object in the Solar System to display a ring system. Encircling bands of material are more usually associated with the giant planets, such as Saturn and Uranus. Chariklo may be just 250km wide but observations made when it passed in front of a distant star reveal the presence of two distinct rings.

Watch Potentially Hazardous Asteroid Whip Past Earth   National Geographic - February 18, 2014
A giant space rock three times the size of football field is about to sail past Earth. Its passage will be broadcast live around the world via the web. Thankfully there was no chance of collision.


A close call in space tonight: Asteroid zips by Earth   CNN - February 18, 2014
Only in space would 2 million miles be considered a close call. An asteroid with an estimated diameter of three football fields zoomed by Earth late Monday, missing our home by about that distance. It traveled at some 27,000 miles per hour.


Rock from heaven is a scientists' delight   PhysOrg - February 12, 2014
A year ago on Saturday, inhabitants of the Russian city of Chelyabinsk looked skyward, some frozen in fear that a nuclear war had begun. Overhead, an asteroid exploded in a ball of fire, sending debris plummeting to Earth in brilliant streaks. The shockwave blew out windows, hurting about 1,600 people, and the burst of ultraviolet light was so strong that more than two dozen people suffered skin burns. Today, enshrined in Russia's folk memory as a big scare, the Chelyabinsk Meteorite, for space scientists, is a boon. They say it has yielded unprecedented insights into the makeup and orbit of asteroids and the risks that a rogue rock may pose to Earth. Only a few asteroids ever cross Earth's path. Fewer still survive the fiery contest of friction with the atmosphere. Those that do are likely to fall in the sea, which covers more than two-thirds of the planet, or in a remote area, such as desert, tundra or Antarctica.