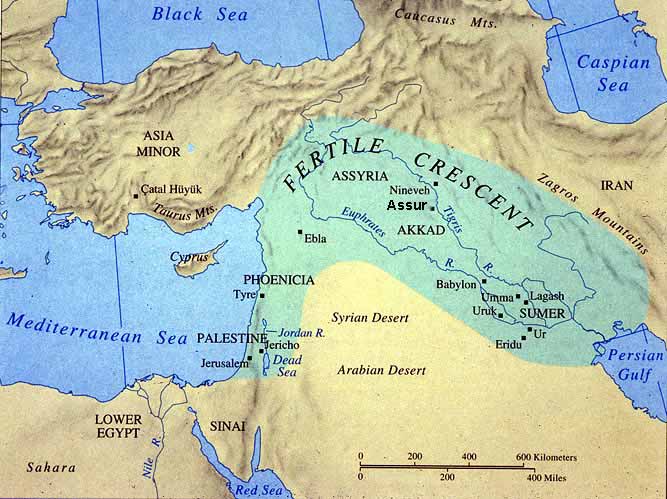 Assur, Ashur, or Assyria, 110 km south of Mosul and 280 km to the north of Baghdad, was the first capital of the vast Assyrian Empire anciently called "The Land of Subarum" which included Iraq, Syria, Anatolia, Iran, Egypt and parts of Arabia.

Historians believe that Assur was inhabited for the first time in the 3rd millennium BC, and went on as an inhabited city up to the 2nd century AD. It had been a human settlement long before it became a capital, and it was known to have come under the dominion of Uruk (Akkad), of the 3rd Dynasty of Ur, and of the Babylonians in the 31st year of King Hammurabi's reign. Asshur (or Assur or Ashur) was one of the capitals of ancient Assyria. The remains of the city are situated on the western bank of river Tigris, north of the confluence with the tributary Little Zab river, in modern day Iraq, more precisely in the Al-Shirqat District (a small panhandle of the Salah al-Din Governorate).

The city was occupied from the mid 3rd millennium BC (Circa 2600-2500 BC) through to the 14th Century AD when Tamurlane conducted a massacre of Assyrian Christians. The site of Assur is a United Nations World Heritage Site, but was placed on the list of World Heritage Sites in danger in 2003, in part due to the conflict in that area, and also due to a proposed dam, that would flood part of the site.

In around 2000 BC, Puzur-Ashur I founded a new dynasty, and his successors such as Ilushuma, Erishum I and Sargon I left inscriptions regarding the building of temples to Ashur, Adad and Ishtar in the city. Assur developed rapidly into a centre for trade, and trade routes led from the city to Anatolia, where merchants from Assur established trading colonies. These Assyrian colonies in Asia Minor were called karum, and traded mostly with tin and wool. In the city of Assur, the first great temples to the city god Assur and the weather god Adad were erected. The first fortifications were also began in this period.

Assur was the capital of the empire of Shamshi-Adad I (1813-1781 BC). He expanded the city's power and influence beyond the Tigris river valley, creating what some regard as the first Assyrian Empire.

In this period, the Great Royal Palace was built, and the temple of Assur was expanded and enlarged with a ziggurat. 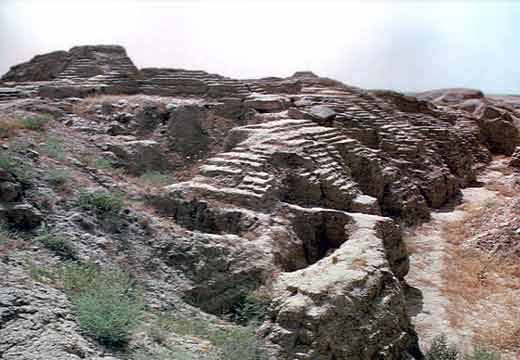 This empire came to end when Hammurabi, the Amorite king of Babylon incorporated the city into his short lived empire following the death of Ishme-Dagan I circa 1756 BC, and the next three Assyrian kings were regarded as vassals. A native king named Adasi drove the Babylonians and Amorites from Assur and Assyria as a whole circa 1720 BC, however little is known of his successors.

Renewed building activity is known a few centuries later, during the reign of a native king Puzur-Ashur III, when the city was refortified and the southern quarters incorporated into the main city defenses. Temples to the moon god Sin (Nanna) and the sun god Shamash were erected in the 15th century BC. The city was then subjugated by the king of Mitanni, Shaushtatar in the mid 15th Century, who removed the gold and silver doors of the temple to his capital, Washukani, as plunder.

Ashur-uballit I overthrew the Mitanni empire in 1365 BC, and the Assyrians benefited from this development by taking control of the eastern portion of the Mitanni Empire, and later also annexing Hittite, Babylonian, Amorite and Hurrian territory. In the following centuries the old temples and palaces of Assur were restored, and the city once more became the seat of a powerful empire from 1365 BC to 1076 BC. Tukulti-Ninurta I (1244-1208 BC) also started a new temple to the goddess Ishtar. The Anu-Adad temple was constructed during the reign of Tiglath-Pileser I (1115-1075 BC). The walled area of the city in the Middle Assyrian period made up some 1.2 square kilometres (300 acres).

In the Neo-Assyrian Empire (912-608 BC), the royal residence was transferred to other Assyrian cities. Ashur-nasir-pal II (884-859 BC) moved the capital from Assur to Kalhu (Calah/Nimrud). Yet the city of Assur remained the religious center of the empire, due to its temple of the national god Ashur.

During the reign of Sennacherib (705-682 BC), the House of the New Year, akitu, was built, and the festivities celebrated in the city. Several Assyrian rulers were also buried beneath the Old Palace. The city was sacked and largely destroyed during the conquest of Assyria by the Medes, Babylonians and Scythians in 612 BC.

The city was fully reoccupied by Assyrians some centuries later. In the Parthian period, between 100 BC and 270 AD, the city becomes an important administrative centre of Parthian ruled Assyria (Assuristan), and some Assyriologists such as Simo Parpola have suggested it may have had some degree of autonomy or outright independence.

New administrative buildings were erected to the north of the old city, and a palace to the south. The old temple dedicated to the national god of the Assyrians Assur (Ashur) was also rebuilt, indicating the continued occupation by ethnic Assyrians. However, the city was largely destroyed again by the Sassanid king Shapur I (241-272 AD). However, the city remained occupied, and some settlement at the site is known right up to the 14th century.

Assur seems to have been reoccupied by Assyrians once again, and remained so well into the Parthian and Sassanid periods. It was occupied during the Islamic period until the 14th century when Tamurlane conducted a massacre of indigenous Assyrian Christians. After that there are no traces of a settlement in the archaeological and numismatic record.

The most important and striking sight today is the Ziggurat, which is a great construction built of backed bricks on the top of a rectangular platform composed of several layers, devoted to the god Assur, as well as the ground temple nearby devoted to the same god and called "Temple of the Universe". There are also temples devoted to the gods of the sun and the moon, and one with two towers sacred to Anu, god of the sky, and Adad, god of storms.

The city overflowed its walls, and many buildings were erected beyond them, notably the Akitu temple where the New Year Festivals were celebrated. It was built by Sennacherib on the river bank (now the old course of the Tigris) and had it surrounded by extensive gardens. 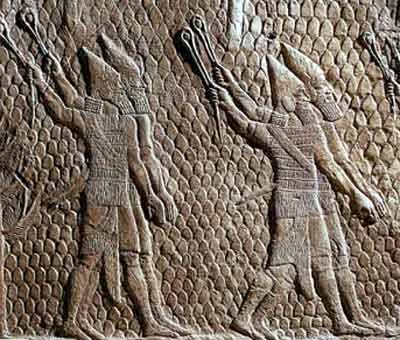 You can also see a recently reconstructed building: the Arab Palace with the four ewans which were once decorated with plaster arabesques. It dates back to the Arab reign in Hatra some two thousand years ago. In the course of their excavations, Iraqi archaeologists discovered the Arabic name of the architect who had designed the palace on one of its supports, which justifies calling it the Arab Palace. 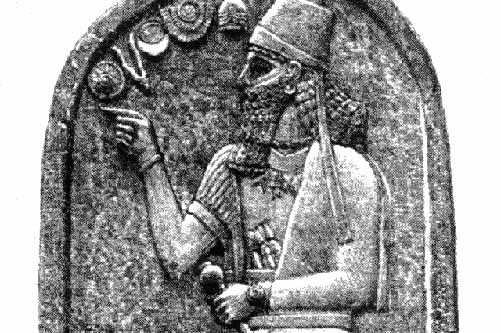 Assur was the main god in the Assyrian pantheon and the protector of the Assyrian state. In the Mesopotamian mythology he was the equivalent of Babylonian Marduk as they were the same soul.