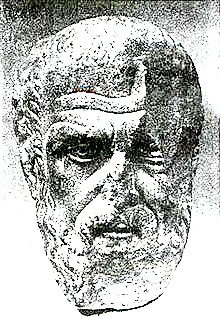 Lucius Flavius Arrianus Xenophon (c. 92-c. 175), known in English as Arrian, was a Greek historian and philosopher of the Roman period. As with other authors of the Second Sophistic Arrian wrote primarily in Attic. His works preserve the philosophy of Epictetus, and include an important account of Alexander the Great, the Anabasis of Alexander.

Arrian was born in Nicomedia (now Izmit), the capital of the Roman province of Bithynia, in what is now north-western Turkey. He studied philosophy in Nicopolis in Epirus, under the Stoic philosopher Epictetus, and wrote two books about the philosopher's teachings. At the same time he entered the Imperial service, and served in Gaul and on the Danube frontier. In 129 he held the office of Consul.

In 130 he was appointed governor of Cappadocia and commander of the Roman legions on the border with Armenia. It was unusual at this time for a Greek to hold such high military command. In 135, he repelled an Alan invasion by successfully organizing the legions and auxiliary troops at his disposal. He deployed the legionaries in depth supported by javelin throwers, archers, and horse archers in the rear ranks and defeated the assault of the Alan cataphracts using these combined arms tactics. The battle as a victory of a Roman infantry heavy force against armored barbarian cavalry stands in stark contrast to the disaster at Adrianople in 378. During this period Arrian wrote several works, in Latin, on military tactics, including Ektaxis kata Alanoon, which detailed the above battle against the Alans.

On the death of his patron, the Emperor Hadrian, in 138, Arrian retired to Athens, where he became a citizen and a member of the Boule (Council). In 145 he held the post of Archon, once the city's leading political post but by this time an honorary one. It was here that he devoted himself to history, writing his most important work, the Anabasis Alexandri or The Campaigns of Alexander. He also wrote the Indica, an account of the voyage by Alexander's fleet from India to the Persian Gulf under Nearchus. He also wrote a political history of the Greek world after Alexander, most of which is lost. Arrian died in Athens in about 175.

Arrian is an important historian because his work on Alexander is the oldest surviving complete account of the Macedonian conqueror. Arrian was able to use sources which are now lost, such as the contemporary works by Callisthenes (the nephew of Alexander's tutor Aristotle), Onesicritus, Nearchus and Aristobulus, and the slightly later work of Cleitarchus. Most important of all, Arrian had the biography of Alexander by Ptolemy, one of Alexander's leading generals and allegedly his half-brother.

Arrian's work is to a considerable extent a reworking of Ptolemy, with material from other writers, particularly Aristobulus, brought in where Arrian thought them useful. Ptolemy was a general, and Arrian relied on him most for details of Alexander's battles, on which Ptolemy was certainly well informed. Details of geography and natural history were taken from Aristobulus, although Arrian himself had a wide knowledge of Anatolia and other eastern regions.

Today more interest focuses on Alexander as a man and as a political leader, and here Arrian's sources are less clear and his reliability more questionable. Probably it was not possible for Arrian to recover an accurate picture of Alexander's personality 400 years after his death, when most of his sources were partisan in one way or another. Aristobulus, for example, was known as kolax, the flatterer, while other sources were equally hostile.

Arrian was in any case primarily a military historian, and here he followed his great model and namesake, the terse and narrowly-focused soldier-historian Xenophon. He has little to say about Alexander's personal life, his role in Greek politics or the reasons why the campaign against Persia was launched in the first place.

Nevertheless, Arrian's work gives a reasonably full account of Alexander's life during the campaign, and in his personal assessment of Alexander he steers a judicious course between flattery and condemnation. He concedes Alexander's vanity, suspiciousness and fondness for drink, but acquits him of the grosser crimes some writers accused him of. But he does not discuss Alexander's wider political views or other aspects of his life that the modern reader would like to know more about.

Arrian in his daily life would have spoken the koine, or "common Greek" of the Hellenistic and Roman periods. But as a writer he felt obliged to follow the prevailing view that serious works must be composed in "good Greek," which meant imitating as closely as possible the grammar and literary style of the Athenian writers of the 5th century BC. In Arrian's case this meant following the Attic style of Xenophon and Thucydides. This is somehow the equivalent of a modern historian trying to write in the English of Shakespeare. His account of India, the "Indica", was written in an equally wooden imitation of the language of Herodotus.

The result is a work which was inevitably stilted and artificial, although Arrian handled the strain of writing 500-year-old Greek better than some of his contemporaries. Fortunately Xenophon was a good model of clear and unpretentious prose, which Arrian was wise to follow. Modern historians may regret that so many of the earlier works on Alexander have been lost, but they are grateful to Arrian for preserving so much.