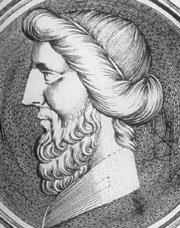 Archytas (428 BC - 347 BC), was a Greek philosopher, mathematician, astronomer, statesman, strategist and commander-in-chief.

Archytas of Tarentum was a Greek mathematician, political leader and philosopher, active in the first half of the fourth century BC (i.e., during Plato's lifetime). He was the last prominent figure in the early Pythagorean tradition and the dominant political figure in Tarentum, being elected general seven consecutive times. He sent a ship to rescue Plato from the clutches of the tyrant of Syracuse, Dionysius II, in 361, but his personal and philosophical connections to Plato are complex, and there are many signs of disagreement between the two philosophers.

A great number of works were forged in Archytas' name starting in the first century BC, and only four fragments of his genuine work survive, although these are supplemented by a number of important testimonia.

Archytas was the first to solve one of the most celebrated mathematical problems in antiquity, the duplication of the cube. We also have his proof showing that ratios of the form (n+1) : n, which are important in music theory, cannot be divided by a mean proportional. He was the most sophisticated of the Pythagorean harmonic theorists and provided mathematical accounts of musical scales used by the practicing musicians of his day.

He was the first to identify the group of four canonical sciences (logistic [arithmetic], geometry, astronomy and music), which would become known as the quadrivium in the middle ages. There are also some indications that he contributed to the development of the sciences of optics and mechanics. He saw the ultimate goal of the sciences as the description of individual things in the world in terms of ratio and proportion and accordingly regarded logistic, the science of number and proportion, as the master science. Rational calculation and an understanding of proportion were also the bases of the just state and of the good life for an individual. He gave definitions of things that took account of both their matter and their form. Although we have little information about his cosmology, he developed the most famous argument for the infinity of the universe in antiquity.

He was scientist of the Pythagorean school, famous as the intimate friend of Plato. His and Eudoxus' student was Menaechmus.

Sometimes he is believed to be the founder of mathematical mechanics.

He is also reputed to have designed and built the first artificial, self-propelled flying device, a bird-shaped model propelled by a jet of what was probably steam, said to have actually flown some 200 yards. This machine, which its inventor called The Pigeon, may have been suspended on a wire or pivot for its "flight".

According to Eutocius Archytas solved the problem of duplicating the cube in his manner with a geometric construction. Hippocrates of Chios before reduced this problem to finding mean proportionals. Archytas' theory of proportions is treated in the book VIII. of Euclid's Elements.

The Archytas curve, which he used in his solution of the doubling the cube problem, is named after him.

Archytas was drowned in the Adriatic Sea; his body lay unburied on the shore till a sailor humanely cast a handful of sand on it, otherwise he would have had to wander on this side the Styx for a hundred years, such the virtue of a little dust, munera pulveris, as Horace calls it.