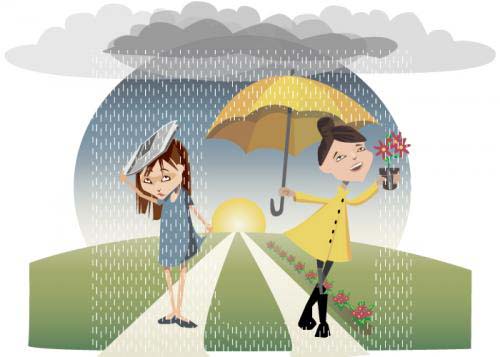 You can't do much to affect the genetic or environmental factors that contribute to anxiety, but you can change your emotion regulation strategies and the way you handle your stress and anxiety. It's all about the way you are programmed.


To suppress or to explore? Emotional strategy may influence anxiety   Med Ex - May 13, 2013
When trouble approaches, what do you do? Run for the hills? Hide? Pretend it isn't there? Or do you focus on the promise of rain in those looming dark clouds? New research suggests that the way you regulate your emotions, in bad times and in good, can influence whether - or how much - you suffer from anxiety.

In a series of questionnaires, researchers asked 179 healthy men and women how they managed their emotions and how anxious they felt in various situations. The team analyzed the results to see if different emotional strategies were associated with more or less anxiety.

The study revealed that those who engage in an emotional regulation strategy called reappraisal tended to also have less social anxiety and less anxiety in general than those who avoid expressing their feelings. Reappraisal involves looking at a problem in a new way, said University of Illinois graduate student Nicole Llewellyn, who led the research with psychology professor Florin Dolcos, an affiliate of the Beckman Institute at Illinois.

"When something happens, you think about it in a more positive light, a glass half full instead of half empty," Llewellyn said. "You sort of reframe and reappraise what's happened and think what are the positives about this? What are the ways I can look at this and think of it as a stimulating challenge rather than a problem?"

Study participants who regularly used this approach reported less severe anxiety than those who tended to suppress their emotions.

Anxiety disorders are a major public health problem in the U.S. According to the National Institute of Mental Health, roughly 18 percent of the U.S. adult population is afflicted with general or social anxiety that is so intense that it warrants a diagnosis.

"The World Health Organization predicts that by 2020, anxiety and depression Đ which tend to co-occur Đ will be among the most prevalent causes of disability worldwide, secondary only to cardiovascular disease," Dolcos said. "So it's associated with big costs."

Not all anxiety is bad, however, he said. Low-level anxiety may help you maintain the kind of focus that gets things done. Suppressing or putting a lid on your emotions also can be a good strategy in a short-term situation, such as when your boss yells at you, Dolcos said. Similarly, an always-positive attitude can be dangerous, causing a person to ignore health problems, for example, or to engage in risky behavior.

Previous studies had found that people who were temperamentally inclined to focus on making good things happen were less likely to suffer from anxiety than those who focused on preventing bad things from happening, Llewellyn said. But she could find no earlier research that explained how this difference in focus translated to behaviors that people could change.

The new study appears to explain the strategies that contribute to a person having more or less anxiety.