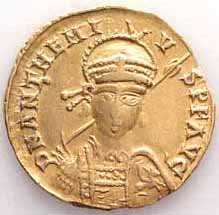 Anthemius of Tralles (c. 474 - c. 534) was professor of geometry at Constantinople and architect, with Isidore of Miletus, of Hagia Sophia. Anthemius came from an educated family; he was one of five brothers -- the sons of Stephanus, a physician of Tralles -- who were all more or less eminent in their respective departments.

Dioscorus followed his father's profession in his native place; Alexander became at Rome one of the most celebrated medical men of his time; Olympius was deeply versed in Roman jurisprudence; and Metrodorus was one of the distinguished grammarians of the great Eastern capital.

He is known both a mathematician and an architect. As an architect he is best known for replacing the old church of Hagia Sophia at Constantinople in 532; his daring plans for the church strikingly displayed at once his knowledge and his ignorance. His skills seem also to have extended to engineering for he is said to have been employed to repair flood defenses at Daras.

Anthemius had previously written a book on conic sections, excellent preparation for designing the elaborate vaulting of Hagia Sophia. He compiled a survey of mirror configurations in his work on remarkable mechanical devices which was known to certain of the Arab mathematicians such as Al-Haytham.

There are a number of stories told about Anthemius, which we may not be able to ascertain for an indefinite amount of time. Regardless of the veracity, these might be the only clues available as to the character of Anthemius.It is related of Anthemius that, having a quarrel with his next-door neighbour Zeno, he annoyed him in two ways.

First, he made a number of leathern tubes the ends of which he contrived to fix among the joists and flooring of a fine upper-room in which Zeno entertained his friends, and then subjected it to a miniature earthquake by sending steam through the tubes. Secondly, he simulated thunder and lightning, the latter by flashing in Zeno's eyes an intolerable light from a slightly hollowed mirror.

Anthemius assumes a property of an ellipse not found in Apollonius (the equality of the angles subtended at a focus by two tangents drawn from a point), and (having given the focus and a double ordinate) he uses the focus and directrix to obtain any number of points on a parabola--the first instance on record of the practical use of the directrix.