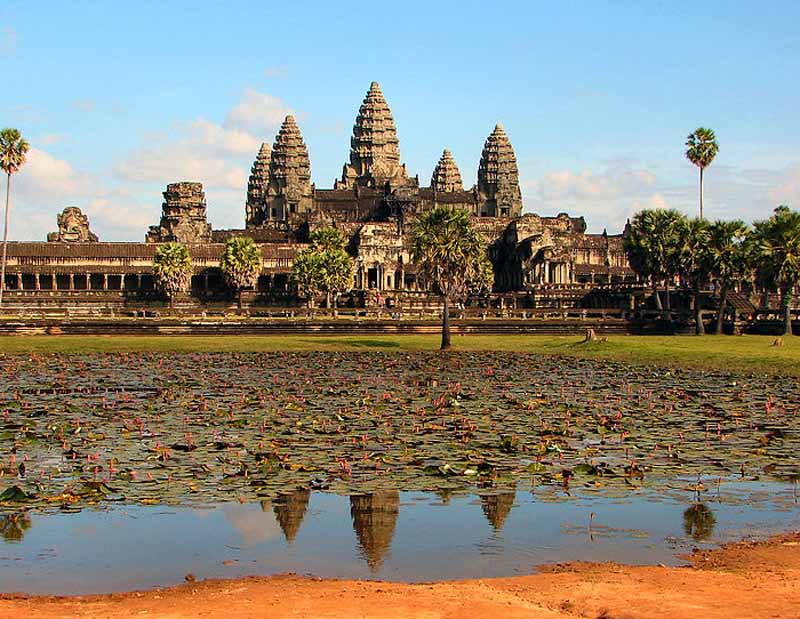 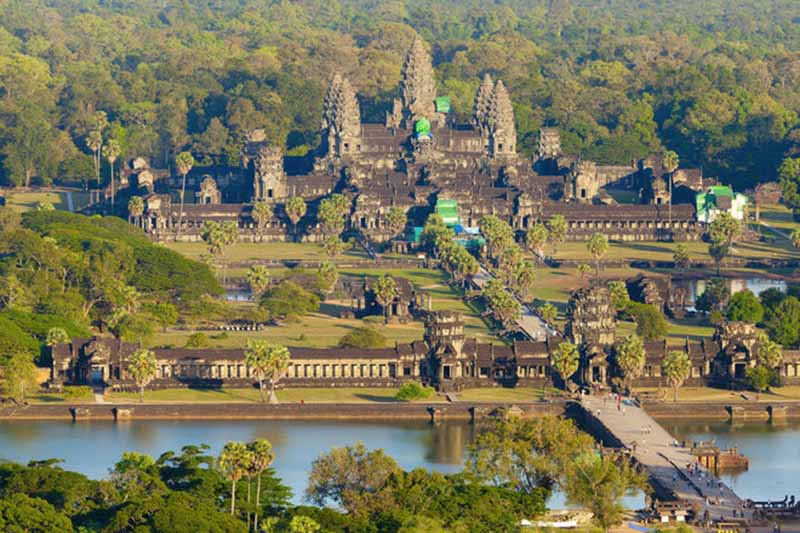 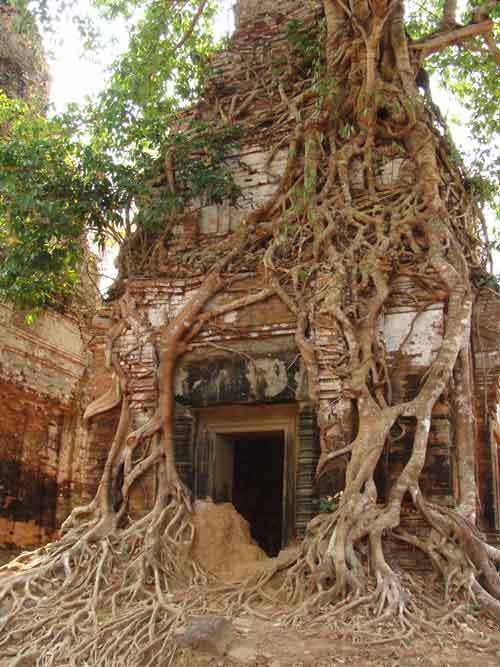 
Angkor Wat is a temple complex at Angkor, Cambodia, built for the king Suryavarman II in the early 12th century as his state temple and capital city, dedicated to the Hindu god Vishnu.

As the best-preserved temple at the site, it is the only one to have remained a significant religious centre since its foundation - first Hindu, dedicated to the god Vishnu, then Buddhist. It is the world's largest religious building. The temple is at the top of the high classical style of Khmer architecture. It has become a symbol of Cambodia, appearing on its national flag, and it is the country's prime attraction for visitors.

Angkor Wat combines two basic plans of Khmer temple architecture: the temple mountain and the later galleried temple, based on early South Indian Hindu architecture, with key features such as the Jagati. It is designed to represent Mount Meru, home of the devas in Hindu mythology: within a moat and an outer wall 3.6 kilometres (2.2 mi) long are three rectangular galleries, each raised above the next.

At the centre of the temple stands a quincunx of towers. Unlike most Angkorian temples, Angkor Wat is oriented to the west; scholars are divided as to the significance of this. The temple is admired for the grandeur and harmony of the architecture, its extensive bas-reliefs and for the numerous devatas (guardian spirits) adorning its walls.

The modern name, Angkor Wat, means "City Temple"; Angkor is a vernacular form of the word nokor which comes from the Sanskrit word nagara meaning capital or city. Wat is the Khmer word for temple. Prior to this time the temple was known as Preah Pisnulok, after the posthumous title of its founder, Suryavarman II.

Angkor Wat lies 5.5 km north of the modern town of Siem Reap, and a short distance south and slightly east of the previous capital, which was centred at Baphuon. It is in an area of Cambodia where there is an important group of ancient structures. It is the southernmost of Angkor's main sites.

The initial design and construction of the temple took place in the first half of the 12th century, during the reign of Suryavarman II (ruled 1113 - c. 1150). Dedicated to Vishnu, it was built as the king's state temple and capital city. As neither the foundation stela nor any contemporary inscriptions referring to the temple have been found, its original name is unknown, but it may have been known as Vrah Vishnulok after the presiding deity. Work seems to have ended shortly after the king's death, leaving some of the bas-relief decoration unfinished.

In 1177, approximately 27 years after the death of Suryavarman II, Angkor was sacked by the Chams, the traditional enemies of the Khmer. Thereafter the empire was restored by a new king, Jayavarman VII, who established a new capital and state temple (Angkor Thom and the Bayon respectively) a few kilometres to the north.

In the late 13th century, King Jayavarman VIII, who was Hindu, was deposed by his son in law, Srindravarman. Srindravarman had spent the previous 10 years in Sri Lanka becoming ordained as a Buddhist monk. Hence, the new King decided to convert the official religion of the empire from Hindu to Buddhist. Given the constant political corruption of the time, citizens were quick to follow a faith founded on tranquility without a need for material gain and power. This made the conversion relatively easy.

Hence, Angkor Wat was converted from Hindu to Theravada Buddhist use, which continues to the present day. Angkor Wat is unusual among the Angkor temples in that although it was somewhat neglected after the 16th century it was never completely abandoned, its preservation being due in part to the fact that its moat also provided some protection from encroachment by the jungle.

One of the first Western visitors to the temple was Antonio da Magdalena, a Portuguese monk who visited in 1586 and said that it "is of such extraordinary construction that it is not possible to describe it with a pen, particularly since it is like no other building in the world. It has towers and decoration and all the refinements which the human genius can conceive of". However, the temple was popularized in the West only in the mid-19th century on the publication of Henri Mouhot's travel notes.

The true history of Angkor Wat was pieced together only from stylistic and epigraphic evidence accumulated during the subsequent clearing and restoration work carried out across the whole Angkor site.

There were no ordinary dwellings or houses or other signs of settlement including cooking utensils, weapons, or items of clothing usually found at ancient sites. Instead there is the evidence of the monuments themselves.

Angkor Wat required considerable restoration in the 20th century, mainly the removal of accumulated earth and vegetation. Work was interrupted by the civil war and Khmer Rouge control of the country during the 1970s and 1980s, but relatively little damage was done during this period other than the theft and destruction of mostly post-Angkorian statues.

The temple is a powerful symbol of Cambodia, and is a source of great national pride that has factored into Cambodia's diplomatic relations with its neighbor Thailand, France and the United States. A depiction of Angkor Wat has been a part of Cambodian national flags since the introduction of the first version circa 1863.

The splendid artistic legacy of Angkor Wat and other Khmer monuments in the Angkor region led directly to France adopting Cambodia as a protectorate on August 11, 1863. This quickly led to Cambodia reclaiming lands in the northwestern corner of the country that had been under Thai control since the Thai invasion of 1431 AD. Cambodia gained independence from France on 9 November 1953 and has controlled Angkor Wat since that time.

During the midst of the Vietnam War, Chief of State Norodom Sihanouk hosted Jacqueline Kennedy in Cambodia to fulfill her "lifelong dream of seeing Angkor Wat."

In January 2003 riots erupted in Phnom Penh when a false rumor circulated that a Thai soap opera actress had claimed that Angkor Wat belonged to Thailand. Read more ...


After watching the video, hit replay, close your eyes and meditate to the music

Climate change and the collapse of Angkor Wat   PhysOrg - April 14, 2020
Built using a thousand elephants and 300,000 laborers, the opulent temple city of Angkor has been near-deserted for centuries, yet its grandeur and mystery now attract a million visitors each year. The question is, why was it deserted at all? An answer is finally emerging.


Angkor Wat: History of Ancient Temple   Live Science - April 5, 2018
Built between roughly A.D. 1113 and 1150, and encompassing an area of about 500 acres (200 hectares), Angkor Wat is one of the largest religious monuments ever constructed. Its name means "temple city." Originally built as a Hindu temple dedicated to the god Vishnu, it was converted into a Buddhist temple in the 14th century, and statues of Buddha were added to its already rich artwork. Sometime later it was turned into a military fortification. Today it is a UNESCO World Heritage Site that scientists are struggling to preserve. Its 213-foot-tall (65 meters) central tower is surrounded by four smaller towers and a series of enclosure walls, a layout that recreates the image of Mount Meru, a legendary place in Hindu mythology that is said to lie beyond the Himalayas and be the home of the gods. 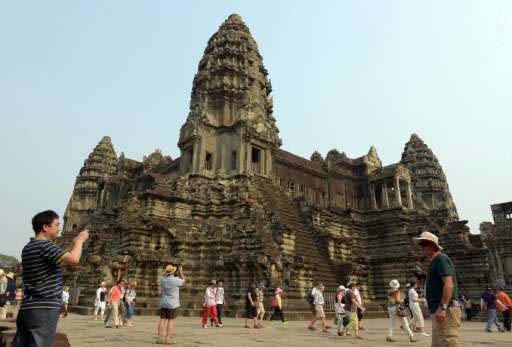 Unprecedented new details of medieval cities hidden under jungle in Cambodia near Angkor Wat have been revealed using lasers, archaeologists said, shedding new light on the civilization behind the world's largest religious complex. While the research has been going on for several years, the new findings uncover the sheer scale of the Khmer Empire's urban sprawl and temple complexes to be significantly bigger than was previously thought. The research, drawing on airborne laser scanning technology known as lidar, will be unveiled next Monday in London. 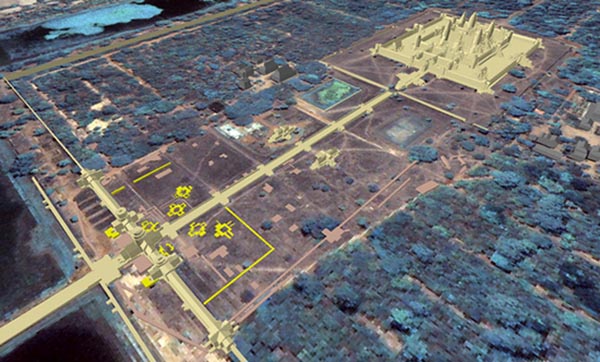 Eight buried towers and the remains of a massive spiral structure created from sand have been discovered at Angkor Wat in Cambodia. The massive structure - almost a mile long - contains a spiral design, with several rectangular spirals that form a giant structure, archaeologists say. This structure, which has dimensions of more than 1,500 metres x 600 metres (about 1 mile by 1,970 feet) is the most striking discovery associated with Angkor Wat to date. Its function remains unknown and, as yet, it has no known equivalent in the Angkorian world. 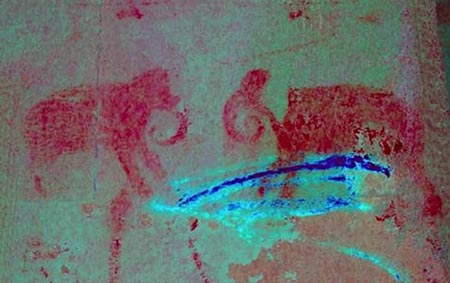 New, digitally enhanced images from Angkor Wat revealed amazingly detailed murals of elephants, gods, boats, musical instruments and horses. The wall paintings are invisible to the naked eye. Each year, millions of visitors flock to Angkor Wat, an ancient temple in modern-day Cambodia. There, they marvel at the 900-year-old towers, a giant moat and the shallow relief sculptures of Hindu gods. But what they can't see are 200 hidden paintings on the temple walls. New, digitally enhanced images reveal detailed murals at Angkor Wat showing elephants, deities, boats, orchestral ensembles and people riding horses - all invisible to the naked eye. Many of the faded markings could be graffiti left behind by pilgrims after Angkor Wat was abandoned in the 15th century. But the more elaborate paintings may be relics of the earliest attempts to restore the temple. 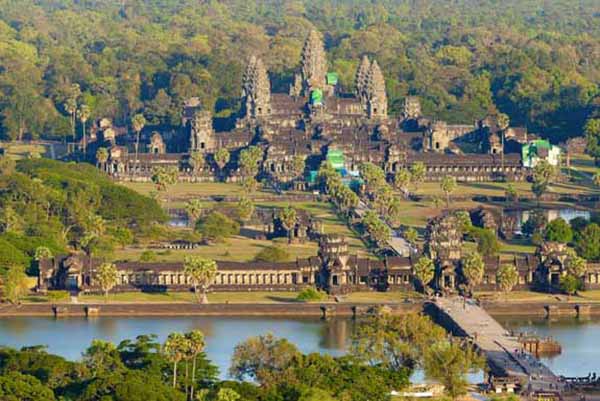 A lost city known only from inscriptions that existed some 1,200 years ago near Angkor in what is now Cambodia has been uncovered using airborne laser scanning. The previously undocumented cityscape, called Mahendraparvata, is hidden beneath a dense forest on the holy mountain Phnom Kulen, which means "Mountain of the Lychees." The cityscape came into clear view, along with a vast expanse of ancient urban spaces that made up Greater Angkor, the large area where one of the largest religious monuments ever constructed - Angkor Wat, meaning "temple city" - was built between A.D. 1113 and 1150. 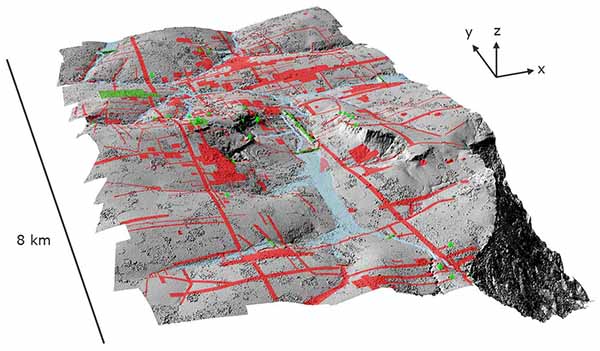