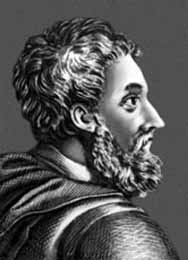 He was as a member of what is now often called the Ionian School of philosophy.

At his native town of Clazomenae in Asia Minor, he appears to have had some amount of property and prospects of political influence; he supposedly surrendered both of these out of a fear that they would hinder his search for knowledge. Although a Greek, he was probably a Persian citizen, perhaps even a soldier of the Persian army since Clazomenae was suppressed during the Ionian Revolt.

In early manhood (c. 464-462 BCE) he went to Athens, which was rapidly becoming the centre of Greek culture. There he is said to have remained for thirty years. Pericles learned to love and admire him, and the poet Euripides derived from him an enthusiasm for science and humanity. Some authorities assert that even Socrates was among his disciples.

Anaxagoras brought philosophy and the spirit of scientific inquiry from Ionia to Athens. His observations of the celestial bodies led him to form new theories of the universal order; he attempted to give a scientific account of eclipses, meteors, rainbows and the sun, which he described as a mass of blazing metal, larger than the Peloponnesus. The heavenly bodies, he asserted, were masses of stone torn from the earth and ignited by rapid rotation. However, these theories brought him into collision with the popular faith.

Anaxagoras was arrested by his friend Pericles' political opponents on a charge of contravening the established dogmas of religion (some say the charge was one of Medism), and it required all the eloquence of Pericles to secure his release. Even so he was forced to retire from Athens to Lampsacus in Ionia (434-433 BCE), where he died about 428 BCE.

Citizens of Lampsacus erected an altar to Mind and Truth in his memory, and observed the anniversary of his death for many years afterward.

Anaxagoras wrote a book of philosophy, but only fragments of the first part of this have survived through the preservation of Simplicius of Cilicia (6th century BCE).

All things have existed from the beginning. But originally they existed in infinitesimally small fragments of themselves, endless in number and inextricably combined. All things existed in this mass, but in a confused and indistinguishable form. There were the seeds (spermata) or miniatures of corn and flesh and gold in the primitive mixture; but these parts, of like nature with their wholes (the omoiomere of Aristotle), had to be eliminated from the complex mass before they could receive a definite name and character.

Thought arranged the segregation of like from unlike; panta chremata en omou eita nous elthon auta diekosmese. This peculiar thing, called Thought (nous), was no less illimitable than the chaotic mass, but, unlike the logos of Heraclitus, it stood pure and independent (mounos ef eoutou), a thing of finer texture, alike in all its manifestations and everywhere the same. This subtle agent, possessed of all knowledge and power, is especially seen ruling in all the forms of life.

Thought causes motion. It rotated the primitive mixture, starting in one corner or point, and gradually extended till it gave distinctness and reality to the aggregates of like parts, working something like a centrifuge, and eventually creating the known cosmos. But even after it had done its best, the original intermixture of things was not wholly overcome. No one thing in the world is ever abruptly separated, as by the blow of an axe, from the rest of things.

It is noteworthy that Aristotle accuses Anaxagoras of failing to differentiate between nous and psyche, while Socrates (Plato, Phaedo, 98 B) objects that his nous is merely a deus ex machina to which he refuses to attribute design and knowledge.

Anaxagoras proceeded to give some account of the stages in the process from original chaos to present arrangements. The division into cold mist and warm ether first broke the spell of confusion. With increasing cold, the former gave rise to water, earth and stones.

The seeds of life which continued floating in the air were carried down with the rains and produced vegetation. Animals, including man, sprang from the warm and moist clay. If these things be so, then the evidence of the senses must be held in slight esteem. We seem to see things coming into being and passing from it; but reflection tells us that decease and growth only mean a new aggregation (sugkrisis) and disruption (diakrisis).

Thus Anaxagoras distrusted the senses, and gave the preference to the conclusions of reflection. Thus he maintained that there must be blackness as well as whiteness in snow; how otherwise could it be turned into dark water?

Anaxagoras marked a turning-point in the history of philosophy. With him speculation passes from the colonies of Greece to settle at Athens. By the theory of minute constituents of things, and his emphasis on mechanical processes in the formation of order, he paved the way for the atomic theory. However, his enunciation of the order that comes from reason suggested the theory that nature is the work of design.

The conception of thought causing movement in the world passed from him to Aristotle, who postulated a Prime mover.