The Amahuaca - Amazon Tribe of Peru 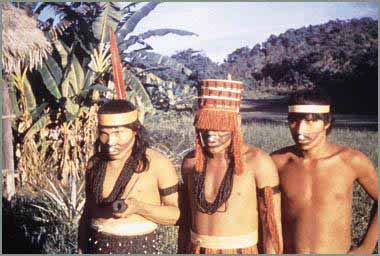 The Amahuaca or Amhuaca are indigenous peoples of the southeastern Amazon Basin in Peru and Brazil. Isolated until the 18th century, they are currently under threat from ecological devastation, disease and violence brought by oil extractors and illegal loggers. In 1998 they numbered about 520. The largest community of the Amahuaca is in Puerto Varadero, a jungle community on the PeruvianĐBrazilian border.

As of 2000, approximately 330 of the 500 Amahuaca spoke the Amahuaca language, a Panoan language. The language is written in the Latin script, and a grammar has been published. From 1963 to 1997, portions of the Bible were translated into Amahuaca.

Amahuaca people hunt, fish, farm, and work in the lumber and oil industries or as domestic servants. They harvest and process Brazil nuts

The Amahuaca people have traditionally occupied the Urubamba Valley, situated between the central and southern regions of Peru.

In the beginning of the 18th century, missionaries met with resistance by these peoples, because the region was isolated from the national society. From 1822-1920 the rubber tappers began their raids, which initiated a process of colonization that affected the traditional organizations of these peoples. Thus began territorial dispersion.

After the rubber boom, the phenomenon of the hacienda and the patrons appropriated indigenous territories and exploited their work force. This also led to the arrival of Dominican missionaries to the region.

In this manner, the national policies of territorial occupation in the Amazon, since the advent of the Republic, has been characterized by the intensification of this colonization, as well as the mercantile activity and extraction. This trend is consolidated with the promulgation of the Law of Lands and Mountains (No.1220) in 1909, that incorporates the State's domain over lands traditionally occupied by Indigenous Peoples of the Amazon, but that were not acquired as agreed to in the Civil Code of 1852. Through this law, large areas of land were granted to businesses and explorers. Such arrangements continued until 1974, when Decree No.20653 (Law of the Native Communities and of Land and Cattle Promotion in Jungle Regions) was proclaimed. Before this law, Decree 3 of 1957 established the legal term "reserve" creating sixty-four of them to assure the subsistence of the Indigenous Peoples

Nonetheless, the settlers in the Urubamba Valley occupied 34,000 hectares and their relation with the native communities have remained unequal, especially in labor and business issues. Also, land disputes arose mostly because of the invasion of communal territory, with the consent, or at least the indifference, of the authorities. In the scope of environmental conservation to the exploitation of wood and the activities of fishing and hunting, should be added the exploitation of hydrocarbon in the Valley of Urubamba trough the Supreme Decree o 24-95-EM, of November 3, 1995. This is especially effective in the Camisea Zone after the discovery of huge gas reserves have affected the economic, social and cultural life of Indigenous Peoples.

Since 1893, when the first well was drilled in Peru, petroleum began to constitute an important element of national political life and of intense ideological debates and antagonistic positions. Despite the opposition it caused, Law 11780 gave foreign companies incentive to solicit concessions of petroleum exploration in the jungle. Although in the 1970s, petroleum explorations were nationalized, foreign companies could be contracted for the exploration andexploitation through the system of Operational Contracting.

During the first years, in the early 80s, because of the deficit that the government faced with respect to petroleum production due to the lack of investment, the decline in the reserves and the technological inefficiency of PETROPERU, the foreign contracting continued. In this way, through Law 23231, and because the contractual and tributary system in Peru had discouraged investors, additional benefits were granted to foreign interests.

In 1981, through the Supreme Decree 17.81-EM/DGH, the Contract for Petroleum Operations was approved with the Shell Company. The results of this exploration during 1984-1987 were the discovery of natural gas in the area called Camisea. Subsequently, the Executive Power confirmed the extraordinary importance and the commercial value of this area, then having to do with one of the largest hydrocarbon reserves discovered in the country, which transformed Camisea into the "new gold of the south." Nonetheless, the explorations of gas have brought negative consequences to Indigenous Peoples, the environment and to human health.

The inclusion of the Urubamba Valley within the national economy has been characterized, since the beginning of the Republic, by the strengthening of powerful economic groups (rubber tappers, patrons, loggers and business people, among others) that have created an irrational pattern of occupation in this region, spoiling the territories traditionally occupied by Indigenous Peoples.

This worsened with the development policies that the Stated performed during the 70s and 80s, when it was seen as a large area with scarce population but with many natural resources which use might contribute to the development of the country. This situation encouraged the settlement of colonists and the granting of logging contracts, as well as the contracting of the Shell Company for the exploration and exploitation of petroleum.

The economic impact on Indigenous Peoples, due to their increased involvement in the mercantile economy can thus be described as discriminating and unequal labor relationships.. This disadvantage has brought transformations in the traditional structure and has increased relationships based on cultural discrimination, as well as negative environmental impacts resulting in a larger extraction of natural resources that puts the ecological balance at risk.

Likewise, pollution from lubricant residuals increased. Also, the dynamization of the economy affected the health of the people in the region, since infectious-contagious diseases were introduced. In some cases, like the village of Nahua, this caused strong epidemics that decimated the population. The eating habits of these villages were also altered and problems of protein deficiency, especially in women and children increased.